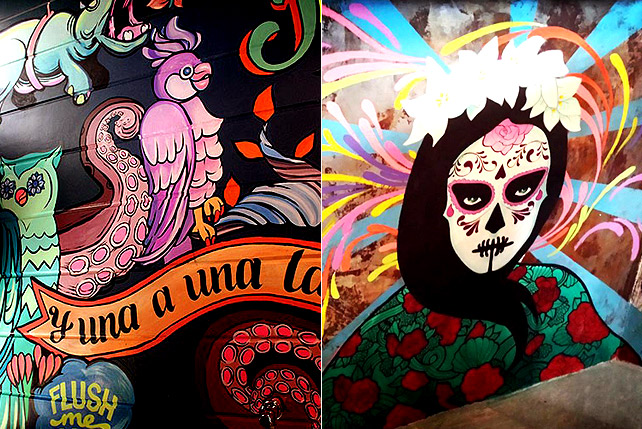 10 Striking Restaurant Murals Worth Checking Out

Get a great view while tickling your taste buds, with restaurants that show how décor and dining go hand in hand. 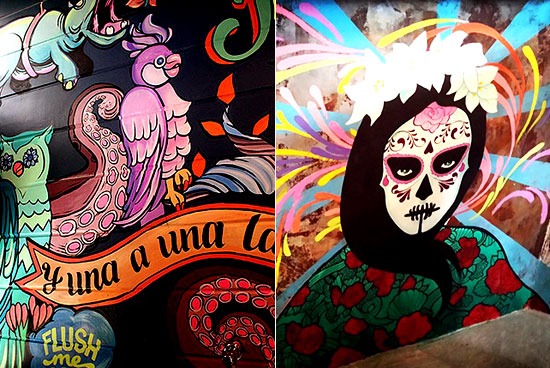 (SPOT.ph) Any eatery can plaster their walls with fancy wallpaper or an iconic graphic to beef up their culinary offerings. Murals add a tad more oomph and personality to a space-especially a restaurant. We surveyed some popular and off the cuff eating places that don't just serve up dishes to remember, but wall art that has history, artistic power, or magnetic whimsy that doesn't just draw your eye to the interiors, but also make every flavor and taste seem all the more delectable. 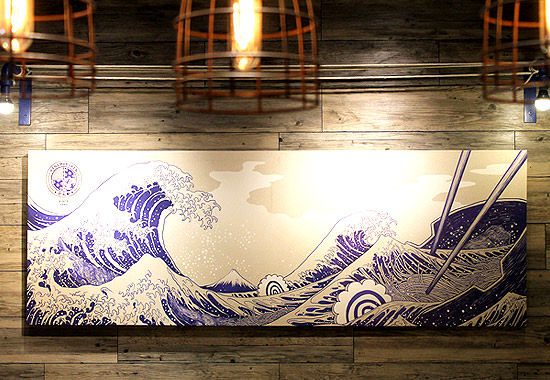 It's only fitting that Hamaruken's mural depicts "The Great Ramen Wave," given Manila’s ongoing fascination over ramen. Merging traditional Japanese art with a cheeky rendition of noodles and chopsticks, the mural captures the heritage that goes with the dish, and the respect for a craft that the Japanese take pride in. Illustrated by the Bad Idea design team, it adds some fun humor to a brand that's had a long and storied history with ramen and meat. 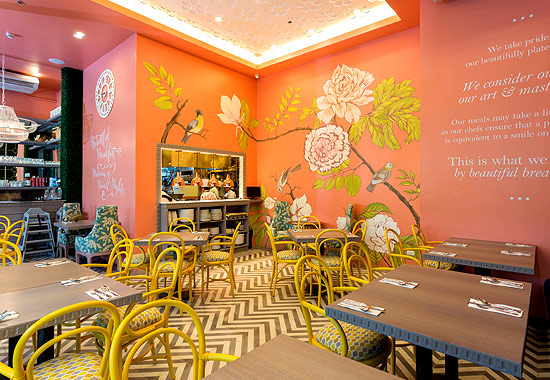 Filling up on the most important meal of the day, whether it be morning, noon, or night, is a generally happy affair-think comfort food and all the warmth it brings. Early Bird Breakfast Club aims to cover their walls in that same delightful sunniness, with murals that transport you to happy tropical destinations. Each branch has a distinct color theme (blue for The Fort, pink for Century City, and yellow for Eastwood), and all carry the same tropical, floral, sunny, smile-inspiring vibe. Designed and hand-painted by artists Soleil Ignacio and Kris Abrigo, these murals are dainty, pleasantly pleasing, and all things a good, hearty breakfast should be. 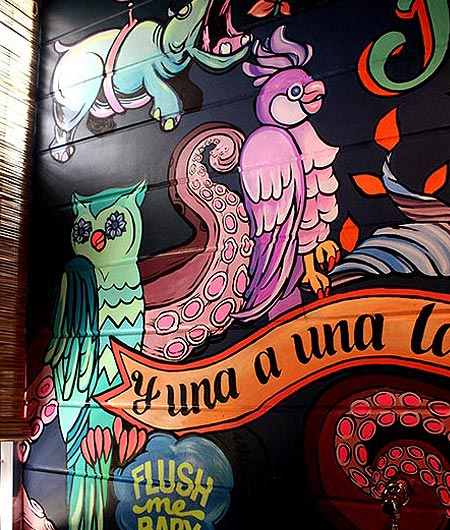 Latin American street food takes center stage in this newfound favorite by the people behind El Chupacabra. With décor that speaks of the colors, festivities, and women of Latin American culture and tradition, Señor Pollo allows you to find yourself in a completely new world. One distinct graphic is the skeleton mariachi band, a play on Dia de los Muertos executed by Carbon Manila, a group of current UP Fine Arts students.

An added restroom bonus brings a fun surprise, too. "We wanted to [do] a crazy, trippy restroom that's never really been done before," says Kat Padilla of Señor Pollo. The big shock is the glow-in-the-dark graphic. "It's become a tradition to take a selfie in the restroom on your first visit!" 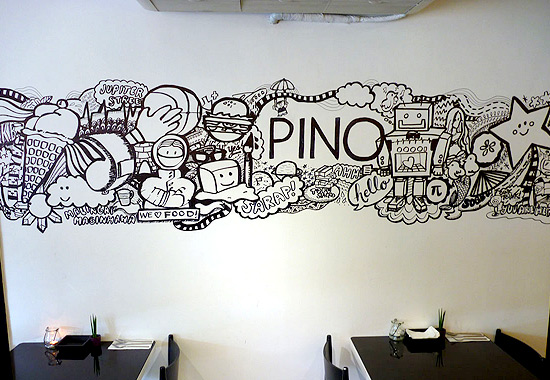 Pino opened in 2007, when Maginhawa Street in Teachers Village was experiencing the first few throes of holes-in-the-wall and quirky eating places. At that time, says restaurant owner Alessa Lanot, popular group Wewilldoodle decorated Pino's walls with their signature hand-drawn doodles. "When we relocated to 39 Malingap in the same village in 2010, they weren't available to design our walls in time for our target opening, so my husband, PJ and I took it upon ourelves to draw on our walls using pens and markers," she shares. "Each element in the doodle represents a part of our restaurants', company's, partners' and friends' lives."

The fun-loving doodles match the upbeat and carefree foodie crowd that Pino's Quezon City and Makati branches attract. Creative, casual, and bubbly, the doodles put a stamp of personal style, craft, and history into Pino's interiors. 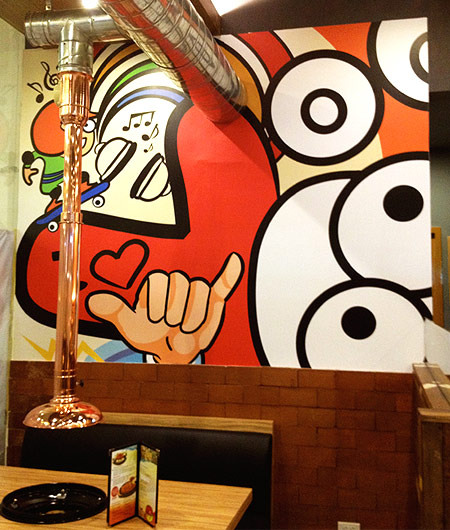 Along with the rise of the country's Korean community and fascination towards all things K-Pop came an influx of Korean restaurants. Yoogane's main dish is Dak Galbi, a stir fried, marinated, diced chicken put together with a secret special sauce alongside sliced cabbage, sweet potato, scallions, perilla leaves, and teok (rice cakes) all on a hot, iron plate. Splashed along their brick walls are posters and murals of a fun, cartoony, bug-eyed chicken, which captures the Technicolor, sparkling world of all things Korean Pop. 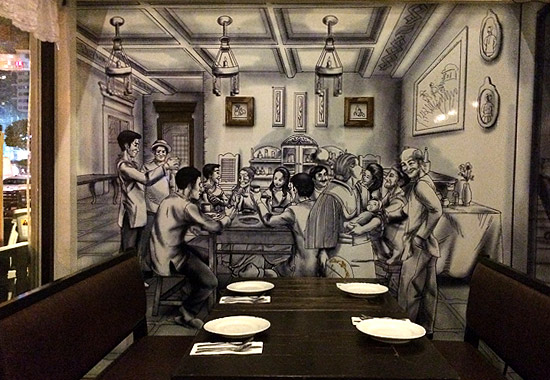 No Pinoy is a stranger to the year 1521-when Magellan first landed on the island of Cebu, signaling the start of the 300-year Spanish occupation. The year brings to mind hundreds of associations with history and food is one of them. 1521 offers all the Filipino classics from childhood favorites to dishes served in large family reunions. Complementing the cuisine are the pen and ink and airbrush-themed murals decking the walls. Depicting scenes you'll find in a classic Social Science textbook with everyone in barong and baro't saya, these lend a lighthearted take on a rich part of our history. 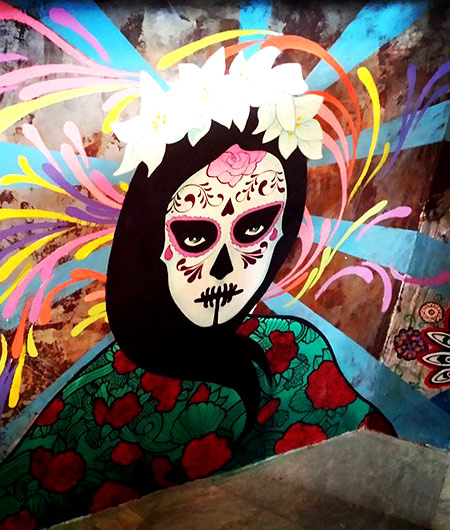 This tequila bar pulls the strong, bold flavors of Mexican cuisine along with the iconic graffiti and murals of East LA's Mexican neighborhoods. "I'm inspired by the Wynwood Walls in Miami and the art at the Mission in San Francisco," says A'Toda Madre's Aljor Perreras. The restaurant prides itself on an overall sensual experience, where their murals fit right in. Street art drawings incorporate the agave plant, Dia de los Muertos, iconic Mexican graphics, and a clear homage to graffiti. Aljor collaborated with Alfred and Didi of A.G. Murals, along with a few artists from the UST College of Fine Arts. The result is a spicy, colorful visual representation of all things tequila and Mexican. 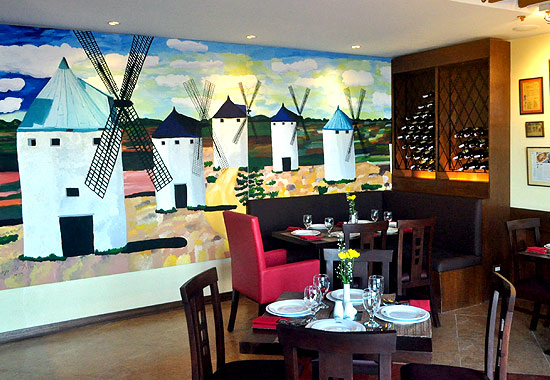 Two years ago, Alba celebrated a milestone in their family history-the 60th anniversary of Señor Anastacio de Alba's career in the country. A stalwart in the restaurant scene known for its Spanish cuisine, Alba's paella and rich, storied dishes have become a staple for the Pinoy palette. To celebrate this important milestone, then seven-year old Maya Angela de Alba, Señor Anastacio's granddaughter, painted the 8x14-foot mural entitled "Los Molinos de la Mancha" (The Windmills of La Mancha). It took Maya two hours every week, for a month and a half, to complete the mural found in the restaurant’s Mall of Asia branch. The wildly impressive mural, done under the tutelage of UP Fine Arts alumni Aubrey Bea-Decloedt, is tangible proof that no dream is impossible. 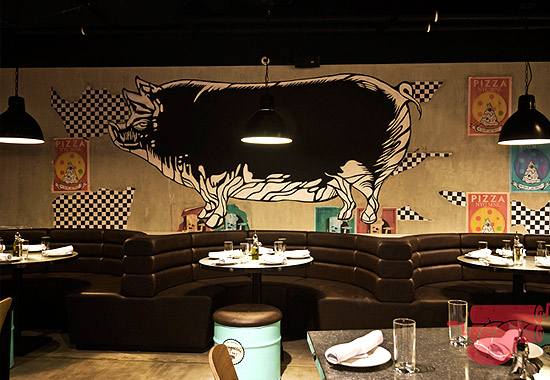 Still relatively new to Manila's restaurant scene, Linguini Fini hails from Hong Kong, where its walls had become a playground for local street artists. "We thought it was something special that needed to be part of Linguini Fini's presence in Manila as well," says Maita Quesada of The Moment Group. The restaurant presents a New York spin on Italian food, meshing familiar flavors with organic produce and local suppliers. Manila-based artist Dee Jae Paeste took in local icons and images and infused it with some of the dishes on the menu-the main thrust of the mural is embracing what is valuable and of quality in the local setting, "...be that organic tomatoes or talent in varying fields like art," she shares. 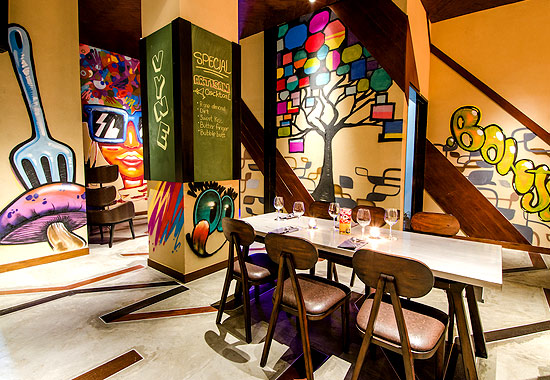 Vyne's take on tapas and fusion cuisine is bold, whimsical, casual, and creative. Capturing this spirit is the graffiti scattered throughout the interiors, bringing a tangibly casual atmosphere to the restaurant. It's a mix of high and low-luxe furnishings and street art, hard-edged industrial design, with softer-edged food that's friendly to the palate. A collaboration among five urban and street artists (Alvin Manlangit, Bergel Conception, Jessie Zamoranos, Errol Orbita, and Gerald Francisco), Vyne's art all comes together to create a lively space conducive to a fun-filled meal.

Erratum: The first version of this article identified the artists for A’Toda Madre as coming from the UP Fine Arts. This has been corrected.

Restaurants Mural Art
Your Guide to Thriving in This Strange New World
Staying
In? What to watch, what to eat, and where to shop from home
OR
Heading
Out? What you need to know to stay safe when heading out