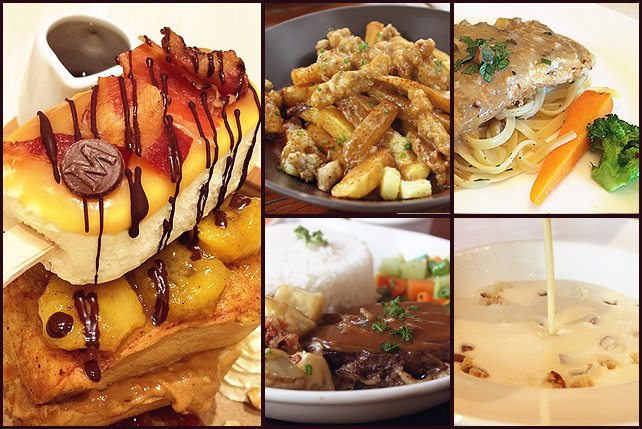 The 10 Best Things We Ate in December

Noteworthy dishes in this food-filled month 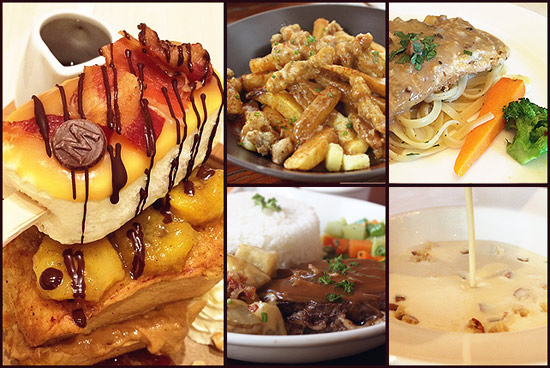 (SPOT.ph) If you didn’t already know, here at SPOT.ph, we love food. You need it to live, but we find that there are some dishes that go well past the virtue of necessity. While others content themselves with a deep fryer and the usual salt and pepper, there are some who make-or at least try to make-an art out of it, with delicious displays and even yummier flavors. We believe those that go above and beyond their duty deserve necessary recognition. So here are our top picks among the dishes we ate throughout December. 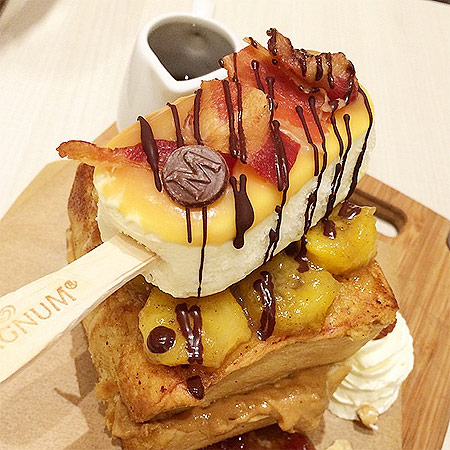 Some time in the ’70s, Elvis Presley craved one particular "sandwich" so much that he and a few companions rode a plane to Denver where it could be found, ate 22 of them, and flew off again, never stepping foot outside the airport. The sandwich was called Fool’s Gold Loaf, a hollowed-out loaf of bread filled with one jar of peanut butter, one jar of grape jelly, and a pound of bacon. The story became legend, and, like all legends, it churned out other incarnations, including this one from Magnum Manila. Two pieces of brick toast sandwiching chunky peanut butter and crowned with sweet bananas, vanilla and gold Magnum, and strips of bacon. On the side, bacon jam. We’re pretty sure Elvis would be jealous right now. 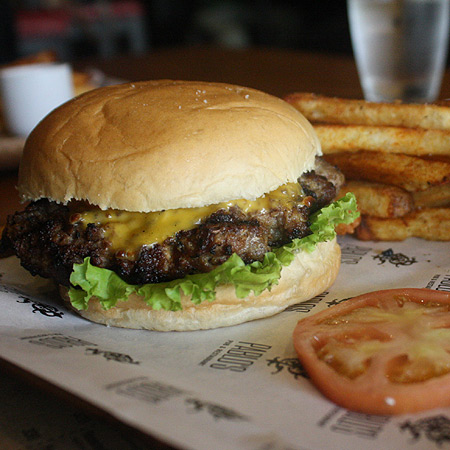 2. The Half Pounder from Pablo’s Pub and Restaurant

The heavy patty crumbles a little bit when you bite into it: soft, gritty ground meat with juices spilling out. It’s beef through and through, and Pablo’s knows well enough to highlight it with little embellishment. A slice of American cheese, a few sheets of green, some onions. Pablo’s recently switched up their bread with a softer, brioche-like potato bun, further enhancing the texture of their patty. The best part is that apart from the P295 original, they have a double patty version, The Pounder (P475). 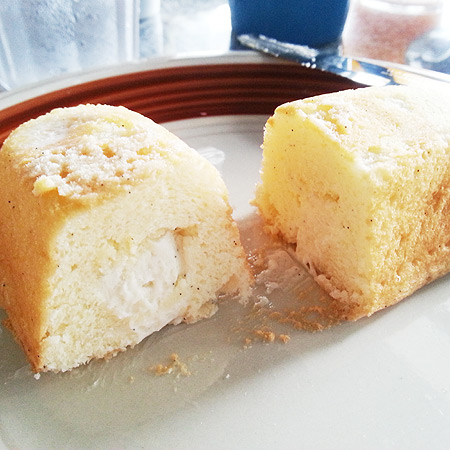 3. Homemade Twinkie from Skull and Bones

Hostess products aren’t readily available in Metro Manila (unless you know where to look!) so you have to thank your lucky stars for an amazing pastry chef like Cuit Kaufman. His spongy cakes (P100/each) are filled with marshmallow cream, giving much more definition to his homemade version than the actual thing. It’s not too sweet, perfectly comforting, and downright addictive. You say you want to cut down sugar and eat half? Try not to be too presumptious. You’ll be eating more than one in less than five minutes.

Skull and Bones is at UP Town Center, Katipunan Avenue, Quezon City. 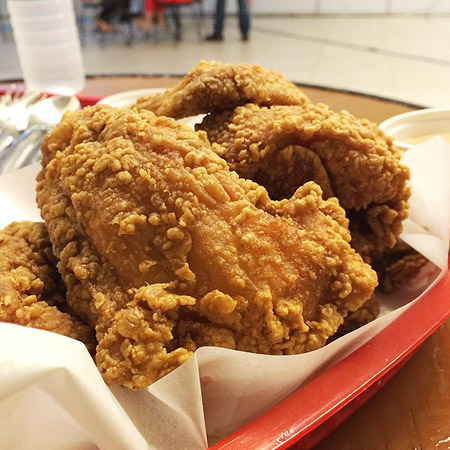 This is old school, and, like vinyl and baking bread, it proves to be the better method. After decades of absence, Chef Eli Aurelio is back to frying one of the crispiest, freshest fried chicken (P138/two pieces) around. The secret? It’s rendered in extra fat to keep it moist and juicy. There’s a slight pepperiness in the batter, too. The chicken doesn’t lack in succulence and flavor so there’s no need for gravy, but you can buy some on the side for P15. 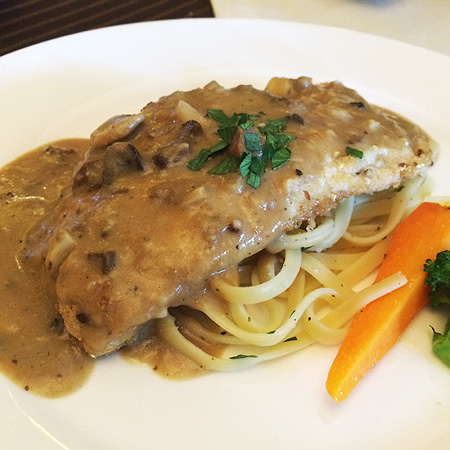 Humility speaks for a dish (P780) like this. The ingredients aren’t groundbreaking and neither is the way they’re used. There’s so much to be said about a place like Mona Lisa Ristorante which features staples and nails them to a tee. The chicken is moist and fork-tender, the garlic olive oil sauce guides the flavors of the dish, the porcini mushrooms are distinct, the linguine is firm and springy. There’s harmony in each bite. Why bother with highfalutin terms when you can make the simpler ones stand out like this. 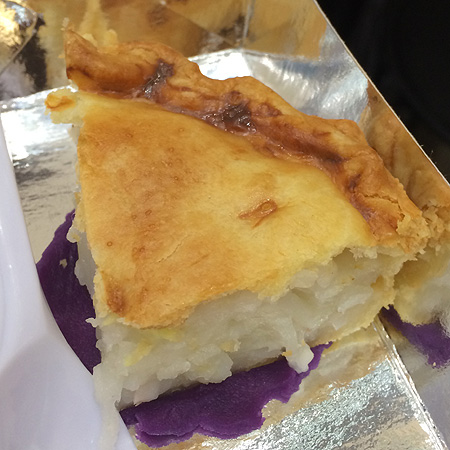 This is the kind of buko pie that titillates the tastebuds. Purple Yam uses meat from different stages of coconut, giving that nutty flavor a different kind of depth. The crust is firm yet uninstrusive, and the filling itself holds its own shape. The swipe of ube at the bottom contributes a nice touch of sweetness that puts this buko pie on top.

Purple Yam is at 603 J. Nakpil Street corner Bocobo, Malate, Manila. They have a stall in SM Aura until January. 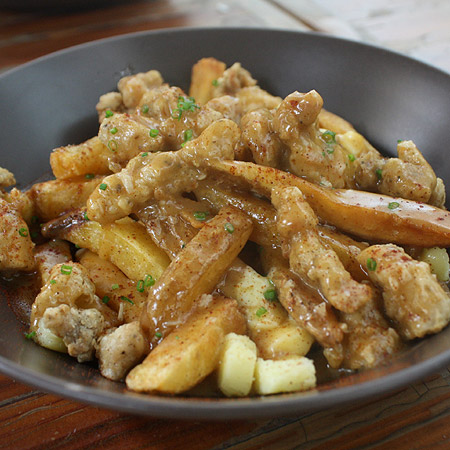 Adam Tan of Main Street did a very smart thing. He combined two of his bestsellers and made what could ultimately become one of his greatest dishes-ever. He chops up his famous buttermilk fried chicken into succulent nuggets and tosses it with his equally famous poutine. For the Chicken Poutine (P220), the original gravy is revised to infuse a more potent chicken flavor, tying up the entire profile of this ridiculously addictive snack. Beer, please? 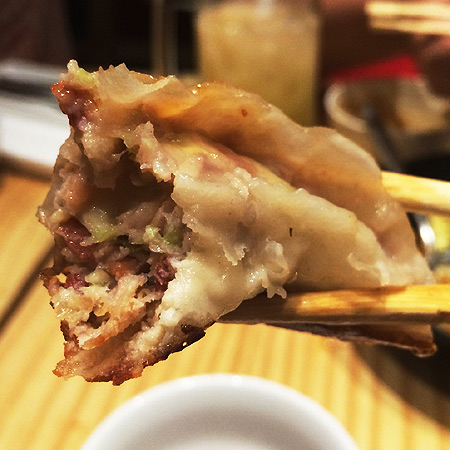 We never really had a problem with the bold profile of the cheese gyoza (from the first three flavors), that is, until the version with bacon came out. Suddenly, plain cheese wasn’t enough. How could it when you’re competing against dumpling with bacon, shredded cabbage, garlic, and ginger? If you found the plain cheese slightly one-note (gasp!), notice how the honeyed bacon cuts through the richness, the vegetable adding crunch to the texture, and the garlic and ginger offering that much-needed kick. Genius. The gyoza is priced at P190 (six pieces) and P380 (12 pieces). 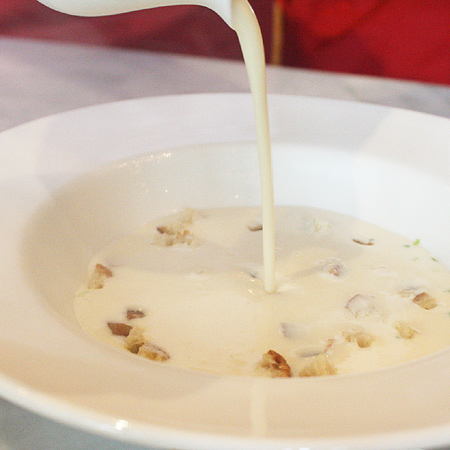 The light salty notes of Parmesan really stands out in this dish. There’s nothing complex, even Chef de Cuisine Joanne Javier says so. It’s all about highlighting the right aspects of the ingredients in the right ways. The special, which was only on the menu for two weeks, is a creamy blend of milk and cream, seasoned with spring onions, double-smoked bacon, and crisp bread. The flavor is light enough to warm up the balance, but it’s rich enough to stand on its own. 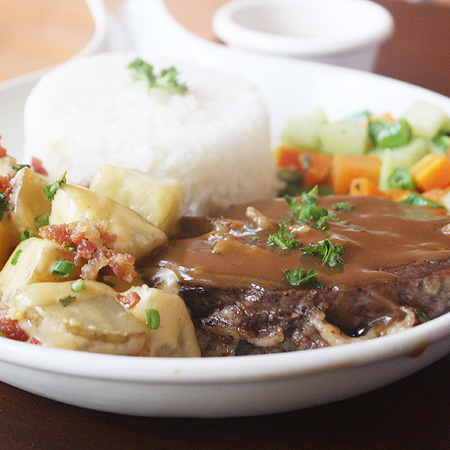 Should we begin with that melt-in-your-mouth US Angus beef? That salty gravy that illicits fuzzy feelings? Those cheesy potatoes that make carbs worth it? This P350 set is everything good on a plate. The flavors are minimalist but with a profound impact-you really can’t go wrong with quality beef. Roast beef is nothing new, of course, but when done right-no, perfectly-it’s the kind of meal you can eat every single day.

Best Food Manila Restaurants Top Foodfinds Bestthings
Your Guide to Thriving in This Strange New World
Staying
In? What to watch, what to eat, and where to shop from home
OR
Heading
Out? What you need to know to stay safe when heading out