Would you drink beer spiked with whale testicles? 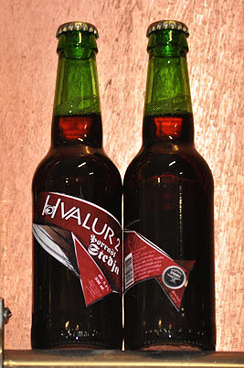 (SPOT.ph) A Grub Street report made us drop our pints of craft beer and turn our attention to a new kind of brew that totally knocked out our buzz. And we’re not talking about alcohol content.

Icelandic brewery Steðji’s Hvalur 2 is a nutty kind of beer that literally infuses whale "nuts" into their formula. (The sold-out Hvalur 1 used your everyday whale meat.) The beer, according to the Grub Street report which quoted Icelandic newspaper Vísir, has a 5.2% ABV level, full of protein, and low fat. The whale testicles are lightly salted and smoked-following an Icelandic tradition of eating cured whale during a local festival. Co-owner Dagbjartur Ariliusson explains that the process takes a long time, with each brewing alloting "its own bona-fide fin whale testicle." Other ingredients are pure Icelandic water, malted barley, and hops.

Steðji’s Hvalur’s website markets it as a beer that makes its drinkers become "true Vikings."

The Hvalur 2 will only be sold in Iceland and only until February, but animal-rights activists are unhappy with the company’s use of the endangered species, according to an article in The Guardian. Vanessa Williams-Grey, a campaign leader against Icelandic whaling, said, "Demand for this meat is in decline, with fewer and fewer people eating it...Even so, reducing a beautiful, sentient whale to an ingredient on the side of a beer bottle is about as immoral and outrageous as it is possible to get."

For more on this story, log on to Grub Street and The Guardian.

Hvalur Whale Testicles Beer
Your Guide to Thriving in This Strange New World
Staying
In? What to watch, what to eat, and where to shop from home
OR
Heading
Out? What you need to know to stay safe when heading out