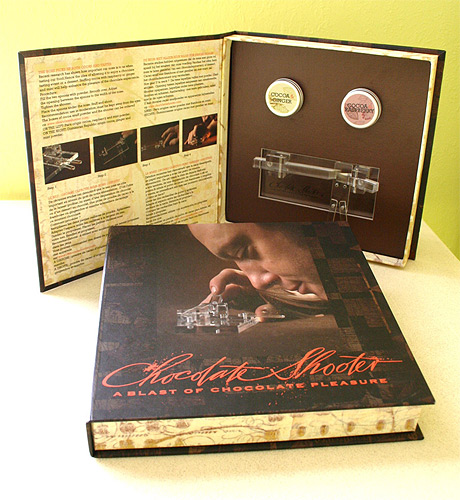 It sounds dubious-snorting chocolate instead of, well, the usual practice of eating it, but Belgian chocolatier (or "Shock-o-latier," as The Telegraph put it) Dominique Persoone swears by it. The unusual dessert, according to the UK-based paper, was first devised in 2008 for a party for Rolling Stones’ Ronnie Wood.

The Chocolate Shooter, which promises a "blast of pleasure," according to its website, comes with detailed instructions: "Fill the two spoons with powder, smooth over. Adjust the opening between the spoons to the width of the nose. Tighten the shooter. Place the spoons under the nose. Sniff and shoot."

Persoone attributed this style of consuming chocolate to the nose’s contribution in tasting food. In The Province and quoted by The Telegraph, Mary Jean Dunsdon, who sells the chocolate in Canada, said: "You kind of experience chocolate for a couple hours very subtly-without the caloric intake. It hits all the same pleasure receptors in the brain as if you were eating it."

Though snorting chocolate doesn’t seem to be harmful, some are unconvinced, calling it a "gimmick." "Aroma plays a part but you don’t experience aroma best by sticking something up your nose-you don’t shove a rose up your nasal passages to enjoy it, do you?" says The Telegraph’s chocolate expert and deputy editor Andrew Baker.

From being available only in Beligum, the Chocolate Shooter is now sold worldwide. Our question: Would you want to try it?

Chocolate Shooter
Your Guide to Thriving in This Strange New World
Staying
In? What to watch, what to eat, and where to shop from home
OR
Heading
Out? What you need to know to stay safe when heading out