That sentiment came from a Bloomberg restaurant review 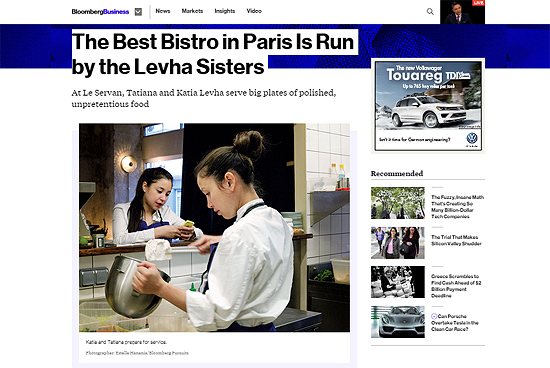 (SPOT.ph) Sisters Tatiana and Katia Levha opened Le Servan, their tiny Parisienne haunt in 2014. It’s a 38-seater coffee-bar-turned-restaurant that Bloomberg food critic Tejal Rao describes as "the best bistro in Paris"-and he says this in his headline.

Tatiana, 30, was born in Manila, and her younger sister Katia, 27, in Paris. According to the review, the sisters grew up in Paris, Hong Kong, and Thailand, though they visit the Philippines annually. Tatiana, who very nearly graduated with a degree in literature, shifted to develop her natural flair for flavor. With her sister busy in the kitchen, Katia runs the front of house (she graduated with a hotel degree in Switzerland) in a friendly, casual manner that’s charming in this type of neighborhood restaurant.

The menu is French, but the Asian influences are rooted in the dishes’ complex flavors. Paris-based blog, The Paris Kitchen, which calls Le Servan "fantastic" goes through some of the menu items like clams with Thai basil, steaks with miso, tandoori white asparagus, fish in harissa butter, breaded and fried duck hearts, and more. The ingredients are topnotch so there’s also emphasis on affordability.

As Rao puts it in his Bloomberg story: "Bistros are vital, bistros of all sorts, but there's something about Le Servan that feels essential to understanding Paris right now. Although it maintains the generous spirit of the classic iteration, the restaurant also offers an accurate representation of the city as it really is: a massive mix, rich with immigrant culture, where the meaning of French food is changing with new influences all the time."

For more on this story, log on to Bloomberg.com