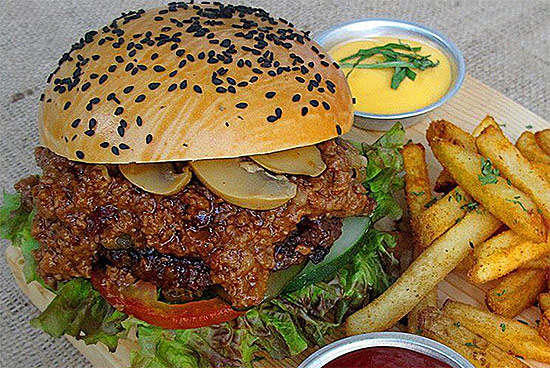 Now is the best time to eat an ostrich burger

Two for the price of one!

(SPOT.ph) The city's ostrich meat capital is giving us another reason to try this underrated protein: buy-one-take-one ostrich burgers.

The Ostrich Farm, which started as just that—a farm—began selling cooked ostrich meat at bazaars before opening a restaurant in 2014. It relaunched early this June, but maintained its menu of comfort food laden with ostrich meat.

Ostriches yield red meat. There's a slight resemblance to other poultry, though it's much more similar in look and texture to beef—but with lower fat content than beef, chicken, or turkey.

For this deal, available Mondays to Thursdays, 10 a.m. to 6 p.m., The Ostrich Farm is offering their ostrich burgers at two for the price of one. Some of their burger offerings include the Sloppy Joe, Sunrise (with a sunny side up egg), Mushroom, Big Bird (loaded with chili), and the signature The Farm. The patties are 100% ostrich supplied by the owners' farm. Prices range from P338 to P448.

Buy One Take One Ostrich Meat The Ostrich Farm