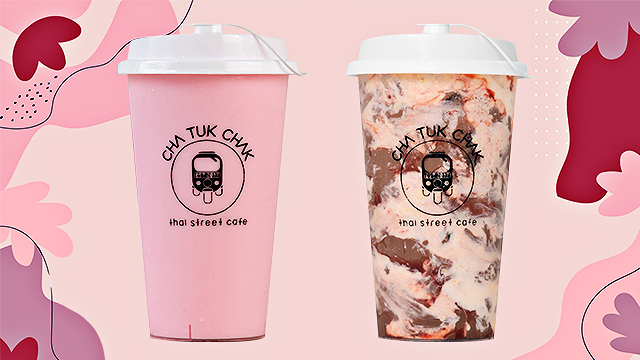 For One Day Only: You Can Get Two Cha Tuk Chak Drinks for Just P143

(SPOT.ph) Raise your hands if, like us, you turn to sweet and milky drinks whenever you're stressed, bored, or just thirsty! If there's any shop that knows how to make great beverages, it's Thai milk-tea spot Cha Tuk Chak, whose lineup includes Thai classics as well as more modern sips. And what's better than one Cha Tuk Chak drink? Two Cha Tuk Chak drinks, obviously—especially when you can get them at a discount! Here's the deal: on February 14, Cha Tuk Chak is letting you order two popular beverages of theirs—namely, regular-sized versions of the Nom Yen and the Choco Ichigo Cheesecake—for just P143. Mark your calendars!

You can avail of this offer at selected Cha Tuk Chak branches or have it delivered to your doorstep by ordering via GrabFood, Foodpanda, and Pick.A.Roo.

In case you haven't tried them, here's a quick rundown: the Nom Yen is a Thai drink also known as "pink milk" and is sweetened with sala syrup; the Choco Ichigo Cheesecake is a playful beverage of chocolate milk with strawberry cheesecake. With their sweet and indulgent makeup, they're both perfect for Valentine's season!

This promo is valid at the following branches:

Cha Tuk Chak is a milk-tea spot that specializes in Thai versions of the said drink. Aside from the Choco Ichigo Cheesecake and Nom Yen, you also can't go wrong with their Black Fire Tiger (with milk, tea cream, creme brulee, and black and honey pearls) and Cha Yen (Thai milk tea) drinks!

Cha Tuk Chak Chocolate Strawberry Valentine's Day Drinks Cheap Eats Adventurer Savvy Tpc-000001 Food Delivery Heading Out New Normal Foodie Cvd Services Directory
Your Guide to Thriving in This Strange New World
Staying
In? What to watch, what to eat, and where to shop from home
OR
Heading
Out? What you need to know to stay safe when heading out