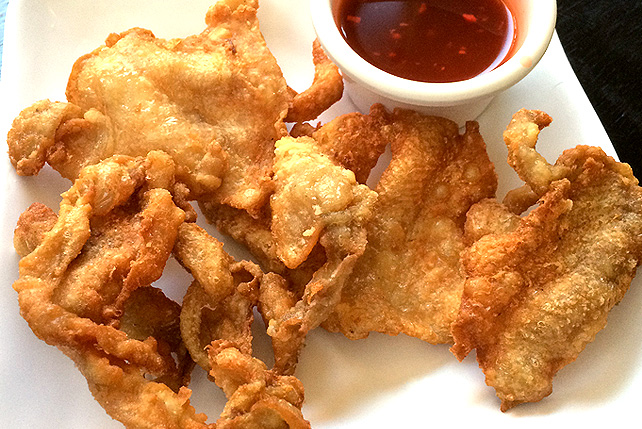 10 Chicken Skin Dishes Worth Breaking Your Diet For

Eating chicken skin is how we live dangerously. 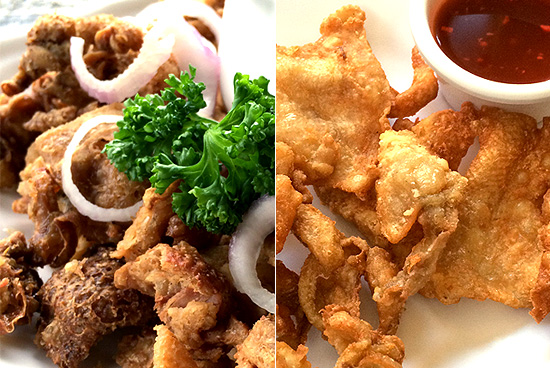 (SPOT.ph) If death by cholesterol is the game, then you would definitely want these guys on your team. Chicken skin is like the poultry equivalent of bacon or chicharon (depends on your preference), which means its yumminess is directly proportional to its deadliness, so eat it in moderation.

But save the moderation for some other time. Today, we are going all chicken-skin (the delicious kind) crazy with our 10 favorites. 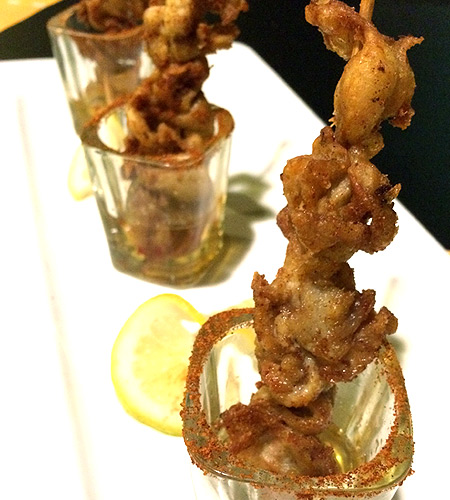 This dish is a mouthful to say, but it's nothing compared to the mouthful of flavor that it offers. The skewers are marinated in a mix of robust spices that are enhanced by the citrus-y taste of the lime. It's not a spicy dish per se, but it does have its own flare. Maybe it’s the tequila talking. 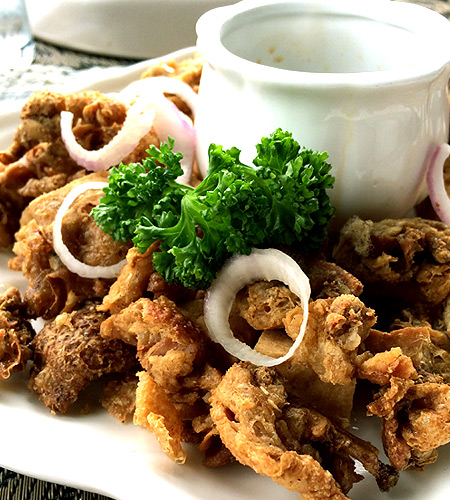 Bistro Pamana deconstructs the everyday Tokwa't Baboy, but still successfully maintains that down-home quality. Nope, nothing pretentious about this dish. It doesn't try hard to be something it's not. On that note, it's completely comforting, but also plays on your palate by not soaking its crispy elements in a bath of toyo as it usually does in a dish like this. 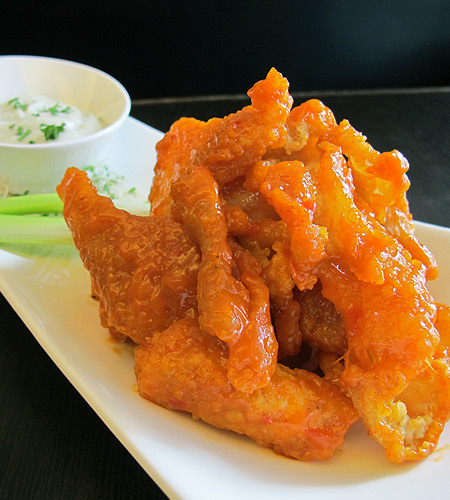 Pino's buffalo chicken skin is divine. Their buffalo sauce is gentle with the spice, but not shy with flavor.  The crispness isn't compromised by the sauce in any way, which bodes well for its reputation as the perfect pulutan with their flavored beer selection. 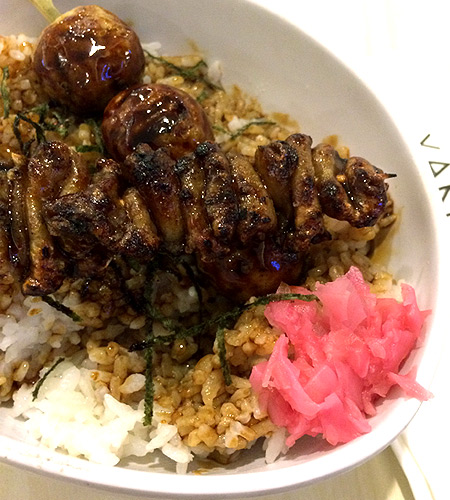 Fast food just keeps getting better. Case in point: Yakitori One, which introduces a relatively new concept to Filipino food-court goers with its Japanese-style grilled viands. Their chicken skin yakitori can be served on its own or as part of a set (recommended!), complete with rice and a generous drizzling of their tasty sauce. Price, check! Taste, double check! 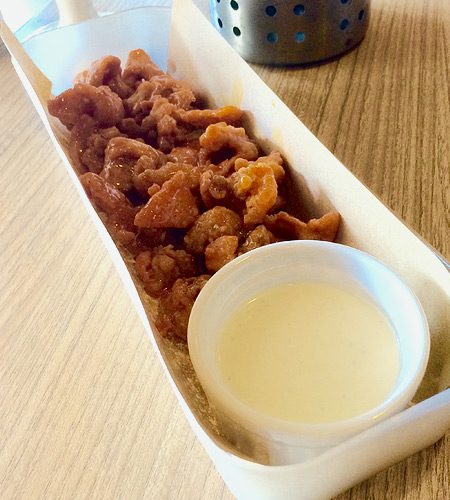 This small burger joint is beefed up with more than just its hearty patties. It offers sweets, milkshakes, and sides-among those, a favorite would be the Buffalo Skins. It's exactly what you'd expect from its name. Their version is tossed in a light buffalo sauce and is more tangy than spicy. Perfect for those who aren't keen on burning their tongues and just want a little kick from their buffalo craving. 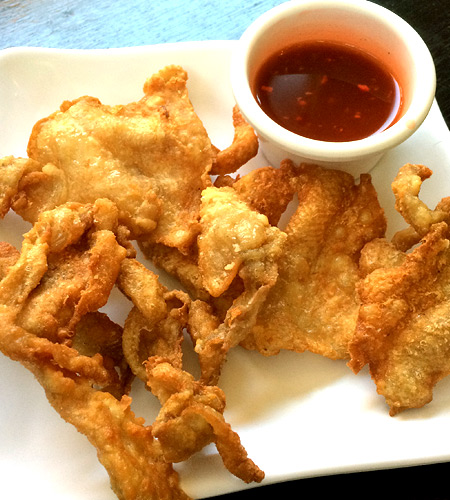 This is as simple as it gets. When you say chicken skin, you think: fried, crispy, dipped in spicy vinegar. Jay J's chicken skin appetizer doesn't disappoint with this one.  It is what every Pinoy expects when they order chicken skin. The straightforwardness is reassuring. 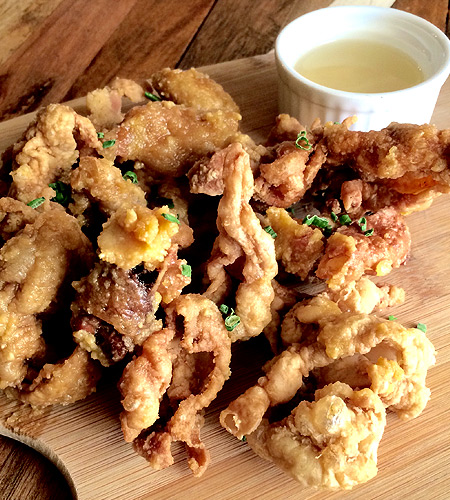 Although it looks like the usual fried chicken skin dish, when you dig into one (or four), you taste the subtle difference that the salted egg yolk brings to your palate. It not only brings a different taste, but it adds an interesting texture, too. 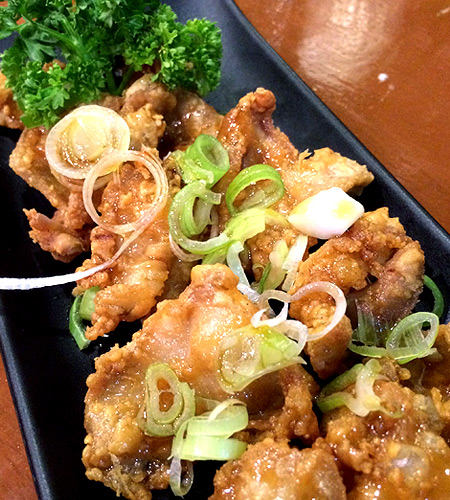 What to make of extra chicken skin in the kitchen? Fry it, of course! Following the minimalist tradition of the Japanese, this small plate of fried goodness is calming in its simplicity. The brittle, bite-sized portions are drizzled with just the right amount of teriyaki sauce. It's almost impossible to resist ordering a side of gohan or maybe fried rice to go with it. 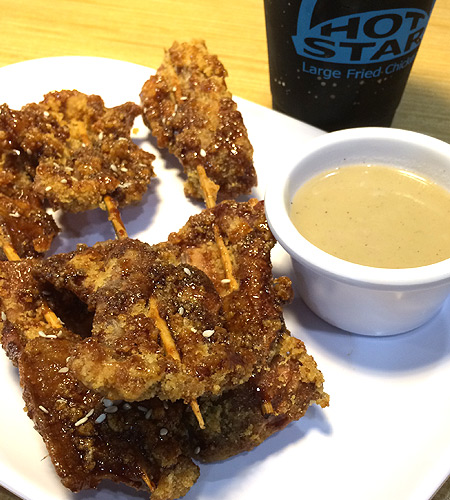 Hot Star is known for its large portions of perfectly fried chicken chops, but apparently that's not the only chicken part they do well. They skewer thin slices of chicken skin and deep fry it in the fashion they're famous for and season it with a sweet blend of barbecue sauce and sesame seeds. What comes out is almost like a miniature version of their fried chicken, but there's nothing small about its flavor. 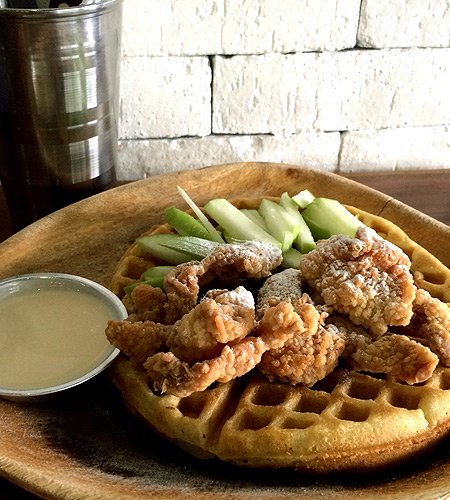 Chicken and Waffles (P145) from Pi Breakfast and Pies

It's not all that unusual to pair waffles with chicken, but here at Pi, they do "usual" differently. At this point, you know Chef Ed Bugia is prolific with chicken skin. The waffle batter is littered with jalapeño bits that add texture to each bite. The saltiness and crispness of the chicken skin goes well with the sweetness of the strawberry and blueberry jam that's smeared on top. And, as if it weren’t already bursting with flavor, everything is tied together by the sour cream maple sauce they serve on the side. Mmmm!

Pi Breakfast and Pies is at 39 Malingap Street,Teachers Village, Quezon City. Read more about it here.

Chicharon Chicken Skin
Your Guide to Thriving in This Strange New World
Staying
In? What to watch, what to eat, and where to shop from home
OR
Heading
Out? What you need to know to stay safe when heading out