No pun intended. Even beer can't make it sound cool. 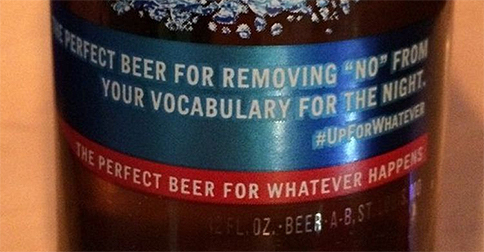 (SPOT.ph) Just hours after Bud Light's new tagline, "The perfect beer for removing 'no' from your vocabulary for the night" ignited the ire of netizens everywhere, its manufacturer Anheuser-Busch InBev has announced that they have stopped production of the message on their bottles.

"The Bud Light Up for Whatever campaign, now in its second year, has inspired millions of consumers to engage with our brand in a positive and light-hearted way. In this spirit, we created more than 140 different scroll messages intended to encourage brand engagement. It’s clear that this particular message missed the mark, and we regret it. We would never condone disrespectful or irresponsible behavior. As a result, we have immediately ceased production of this message on all bottles."

A photo of Bud Light's controversial label was posted on Reddit yesterday, April 29, and quickly made rounds online (both media and social media) for its alleged—or rather, inadvertent promotion of date-rape culture.

According to Fox News' report, Bud Light has only confirmed ceasing production of the label, but hasn't announced pulling out bottles already on store shelves.

We haven't seen these bottles in Philippine stores, but we've had our fill of these sucky puns with the scandalous "It's a snuggle with a struggle" and "I promise I'll pull out" shirts. Spare us, Bud Light.

For more on this story, log on to Vox.com, Fox News, and NPR.org.

Bud Light Up For Whatever