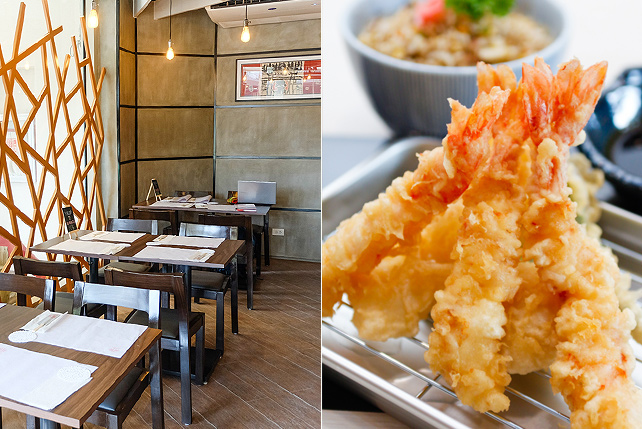 New Restaurant Alert: Asakusa at The Grove by Rockwell, Pasig

Tempura is king at this new joint, but it has other Japanese favorites as well. 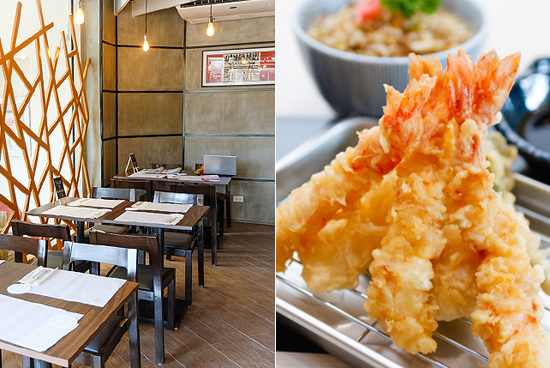 (SPOT.ph) Tempura seems set to be the next big thing, getting ready to take Manila by storm after the ramen and katsu boom. The time seems ripe, and Asakusa, named after the district in Tokyo that’s all tempura restaurants, aims to give Pasig its own tempura house.

Asakusa is one of the first few restaurants in The Grove, Rockwell's new development across Tiendesitas. "The area isn't done yet; we're the only restaurant here, but the good thing is the parking's free, and there's lots of parking," says Celline Bautista, one of Asakusa’s owners. 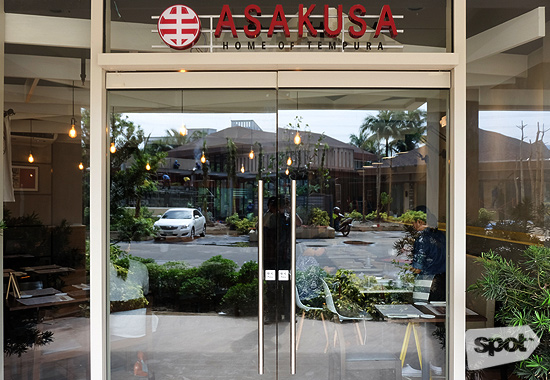 A taste of Japan

Celline, her husband and chef Jacob Bautista, and their friend Rolf Madrid are the trio behind this exciting new venture. The Bautistas have extensive experience in the restaurant industry, but this is their first Japanese concept. The idea developed when the couple visited Rolf, who had been studying in Japan. He took them to Asakusa, and Celline recalls the restaurants to be pretty expensive—that is, until they were introduced to an affordable mom-and-pop shop ran by a Japanese couple.

"We really liked it, so my husband and I asked Rolf to talk to the [owners] to teach us how they cook so we could bring it to Manila," Celline says.

The Japanese husband and wife, however, prepped their tempura quite traditionally. "We didn't have the time to be trained the way they were trained," explains Celline. Adds Jacob, "It takes years of experience to perfect it." The Bautistas eventually found a machine that could cook the tempura at a certain time and in a stable temperature. The goal, says Jacob, is consistency, and the device assures quality cooking even with the chef away from the kitchen. 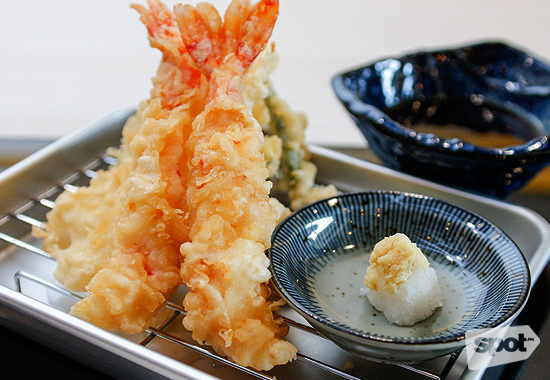 There are five tempura sets to choose from, ranging from a vegetarian arrangement to a set that’s good for sharing. The tempura is served on a tray, to facilitate airflow and maintain crispiness. Asakusa also puts up a choose-your-own-tempura adventure, a simple yet ingenious practicality that would make you wonder why no other restaurant offers it. This option allows customers to select their own sides and sauce.

"We have the traditional tempura sauce which is the light one with the radish, but we also have our special Asakusa sauce, which is a little thicker and more flavorful," says Celline. The latter is slightly sweeter, developed especially for the Filipino palate.

To add to the Pinoy-friendly mindset, Asakusa also proffers non-tempura dishes—all of them delicious. "We realized that with Pinoys, we want something else. That's why we decided to add other stuff [to] the menu, favorites like maki, or certain Japanese dishes that are staples in the Philippines, but with a twist. Like we did chicken karaage, but spicier, and has a teriyaki glaze," Celline says. 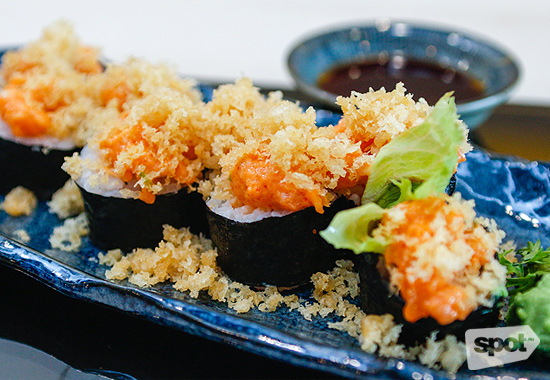 Start with the Salmon Maki (P248/eight pieces). The maki is topped with crunchy tempura batter crumbs, which is an interesting take on a well-loved staple. 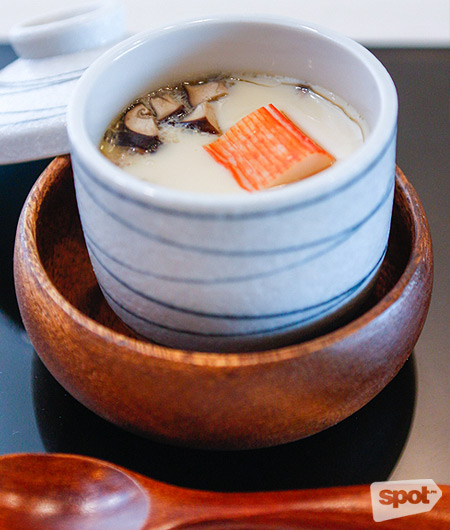 The Chawan Mushi (P68) or egg custard pudding has been on Japanese menus in Manila since time immemorial, and yet few Filipinos have heard of it. This delightful egg custard is light and savory, subtly flavored with chicken, mushroom, and crabsticks. Celline says that a lot of people mistake it for taho; it’s not. It’s a completely different dish altogether. 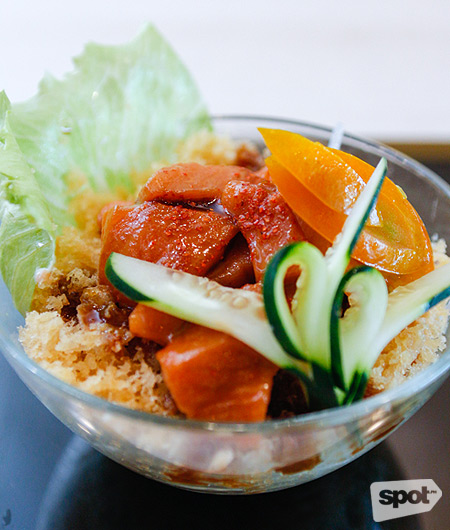 "For appetizer, my favorite is the tuna salad, and I like it very spicy. I have a fascination with spicy dishes," Jacob says. The Salmon/Tuna Salad (P158) is another good way to warm up a meal. Raw fish sits on a bed of tempura cracklings, surrounded by vegetables and tossed with special dressing. There’s a choice between spicy and not spicy, but the former packs more flavor and punch. 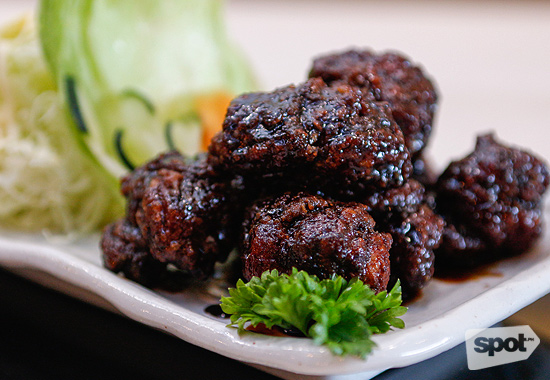 Folks looking for something extra to nibble on can try the Chicken Karaage Teriyaki (P228). "I like everything, obviously, but I like the chicken spicy, because it's crispy. I have it every day," Celline says. Chicken meat is battered, fried, then coated in a sweet-spicy sauce. It may look intimidating, but as we all know, looks can be deceiving. 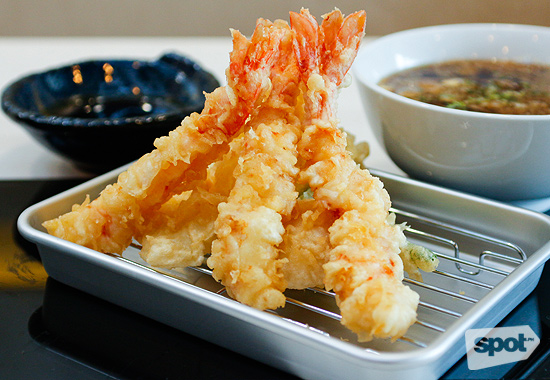 The Emperor Set (P498) is the biggest tempura set Asakusa offers. It includes two tiger prawns, one scallop, one shiitake mushroom, kani, fish, zucchini, and a pair of French beans. "For me, this is (worth it) because you can share it. Honestly, it's a lot. And at least you can taste all the ingredients," Celline says. "We have fresh black tiger prawns that Jacob himself buys every day." 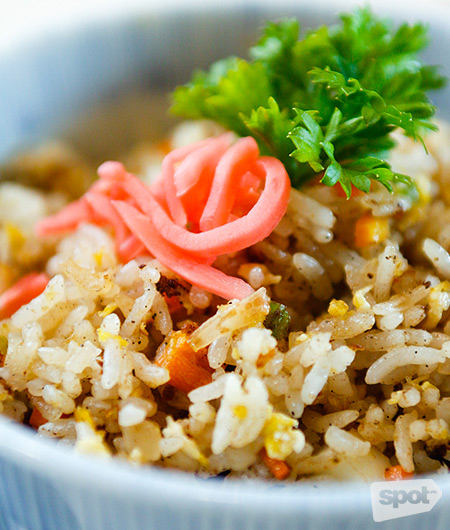 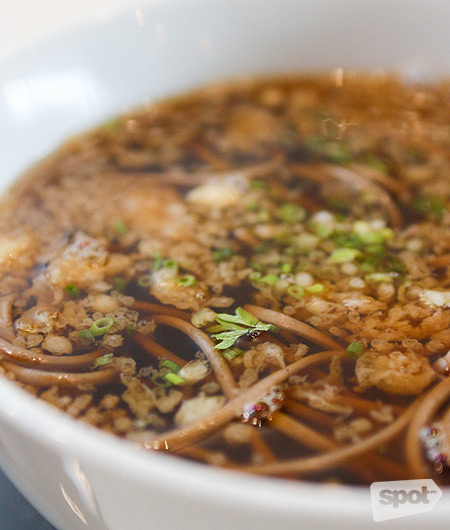 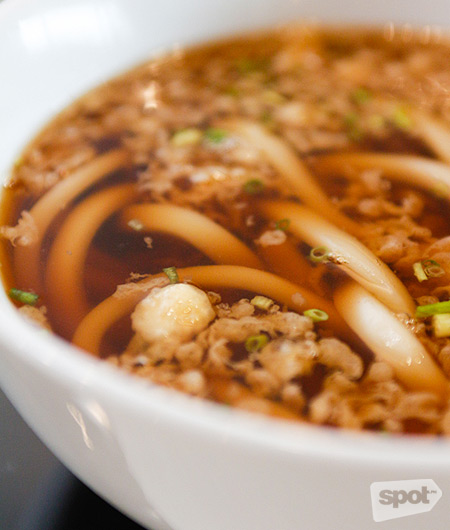 The tempura sets come with a choice of Fried Rice (P68 for a la carte) or Udon/ Soba (P88/hot, P80/cold for a la carte). "I like the hot noodles because the broth is not so overpowering. It's so comforting for me," Celline says. "And for rainy days, it's perfect to have a hot udon or soba." 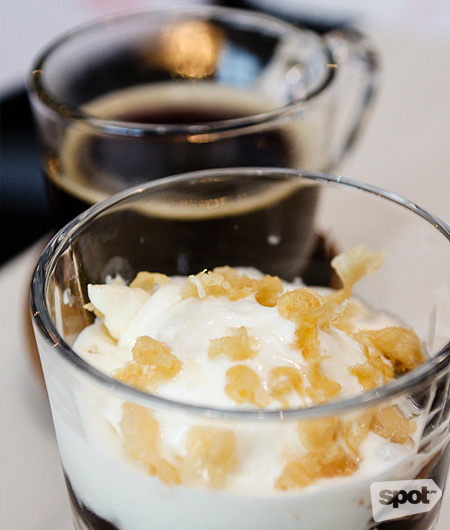 Asakusa is working on a Coffee Jelly (price unavailable) that should be out soon, the jelly silky-smooth, almost but not quite the same texture as the cream it’s served with. Enjoy a cup of coffee (P88) while you converse with friends and loved ones after your meal. "There's always something for everyone," Jacob says.