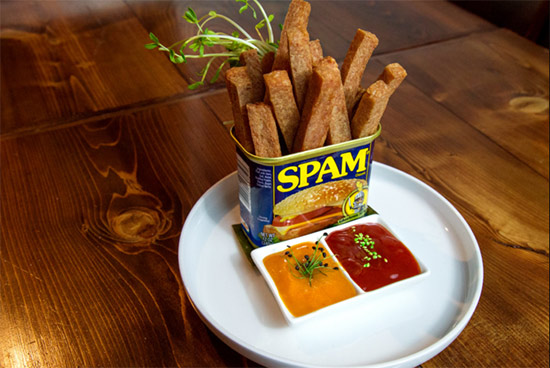 (SPOT.ph) Manila Social Club in Brooklyn, New York, is not the place to find classic Filipino food. The restaurant, which opened in April 2015, is part-owned by 33-year-old Björn Dela Cruz, who was born in Manila then grew up in Indiana. It received a positive review by The New York Times columnist Ligaya Mishan, who described it as "lovely" though at times "rambling."

The menu evokes nostalgia. One dish is Dela Cruz's recreation of a childhood meal he had in Davao Oriental—made with river fish, chayote, and carabao milk. His approximation uses black sea bass, chayote, garlic, fish stock, and, instead of carabao milk, heavy cream. "[It] is beautiful to eat, rustic and sumptuous at once," writes Mishan. "The unexpected touch is absinthe, whose licorice edge scythes through the richness of the cream."

Most of Manila Social Club's traditional Filipino dishes have undergone reinvention one way or another. The kare-kare, for example, features "short rib softened with coconut milk and espresso...in lieu of the traditional peanut sauce comes velouté based on a roux of coconut oil and rice flour, given a whiff of turfiness by hazelnuts, almonds, cashews and sesame oil. It is delicious, if not quite recognizable as kare-kare." Mishan similarly describes Manila Social Club's duck adobo as: "a genteel French cousin of Filipino adobo. No definitive adobo recipe exists—some versions favor soy, others vinegar—Mr. Dela Cruz's, however lovely, still puzzles, tasting not enough of either for the adobo.

Manila Social Club toys with items like Spam fries (which need to be crispier, according to Mishan), homemade longganisa, as well as $100 ube donuts with gold leaves and Cristal icing, but it's their more direct approaches that hit the march. Mishan particularly sings praises over the "Torta Talong."

Tortang talong is a simple eggplant omelet. The Manila Social Club lifts it up with eggplant ash , deep-fried eggplant slices on top, shallots, and garlic fried rice. Of course, it comes with Jufran, a popular Pinoy brand of banana ketchup.

The Ube Halaya comes as bread pudding layered with purple yam and coconut milk jam, with ube crème anglaise on the side. It's sometimes the lone dessert available, but Mishan confirms that "you would want no other."

New York Times Manila Social Club Brooklyn
Your Guide to Thriving in This Strange New World
Staying
In? What to watch, what to eat, and where to shop from home
OR
Heading
Out? What you need to know to stay safe when heading out