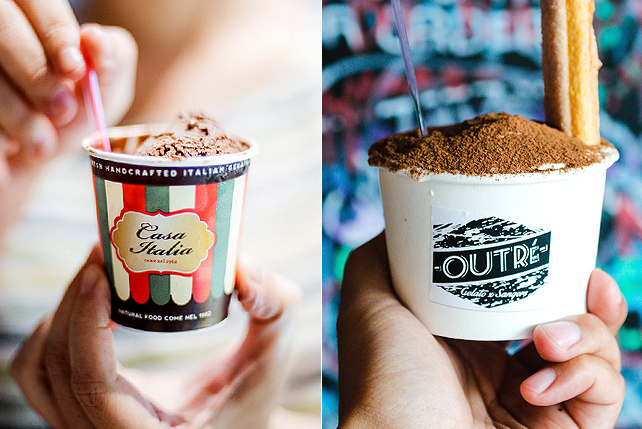 10 Places to Cool Off With Your Significant Other

Ice cream and froyo spots that are worth a try 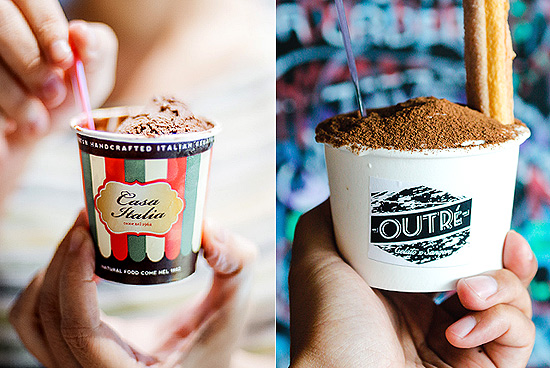 (SPOT.ph) This country is a warm, warm place with unbeatable traffic and government officials who file absolutely useful legislation against comedians cursing. Whether you’re in a relationship or not, we all need to let off some steam. There are times when you just need to cool off.

There's always an ice cream solution for every hothead problem out there. We know you love Merry Moo, BONO Gelato, Pinkberry, and Sebastian’s, but the local ice cream and froyo scene continues to grow. Here are other places to enjoy when you need to take a chill pill. 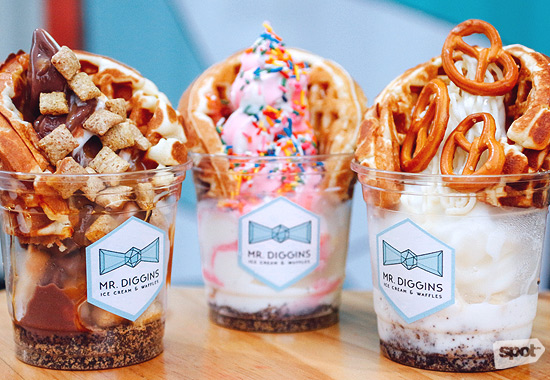 Two of StrEat Maginhawa Food Park’s busiest stalls got together to create a showstopper. Mr. Diggins' agenda is to peddle embellished soft-serve ice cream best with either freshly made waffles or coffee. Choose from Vanilla, Chocolate, or Swirl (a mix of the two), then go crazy on the toppings. To get the most out of their flavors, try any of their pre-arranged combos, which are designed to give you a little taste of everything. 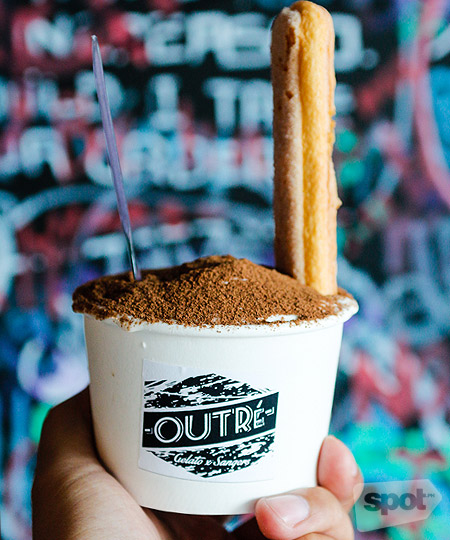 Outré isn’t the first shop to use liquid nitrogen, but we must say it is the most stylish. Never has a shop wall been so photographed since their chalk-doodled surfaces (the perfect backdrop to their cool concoctions). Barely a year since it opened in Parañaque and Outré has already expanded to a second location in Makati. This gelato stop is all about adventure, so expect different flavors every time. 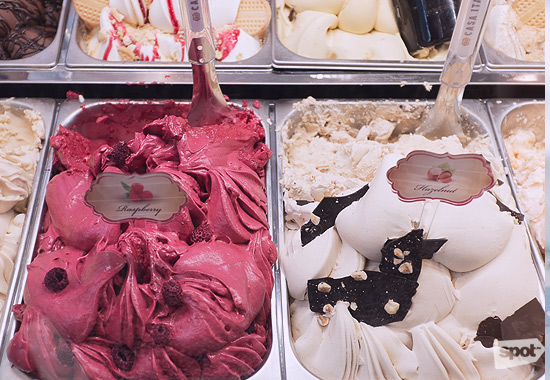 This bright and lively space is an offshoot of Singapore’s most successful ice cream chain, Gelateria Italia. The durian gelato sold Casa Italia’s CEO Jay Tan on the brand. When he brought it over to Manila, however, he turned the gelato shop into a full-service café. It’s the ice cream though that has people coming over and over again. The ingredients are sourced from the very best places (vanilla from Madagascar, pistachios from Sicily), and there’s an impressive selection of flavors, including planned vegan and gluten-free versions. The best part is that they work great with the signature coffee.

Must-tries: Toblerone and Nutella. The gelato is priced from P130 to P260. 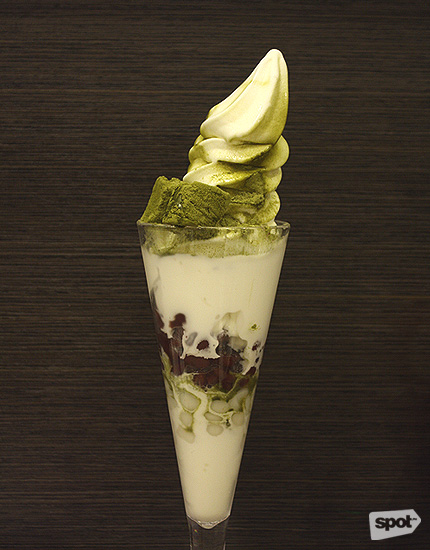 This Hong Kong franchise takes Asian flavors and unconventional combinations to develop jaw-dropping art in the form of desserts. There are more sophisticated endeavors, like their sweet version of ramen and their shaved ice medleys, but the soft-serve ice cream and yogurt are good standbys. By using fresh and quality ingredients, The Dessert Kitchen’s frozen treats have much lower fat and sugar content. You can enjoy them in a cone, as a sundae, or go crazy with their delectable parfaits. 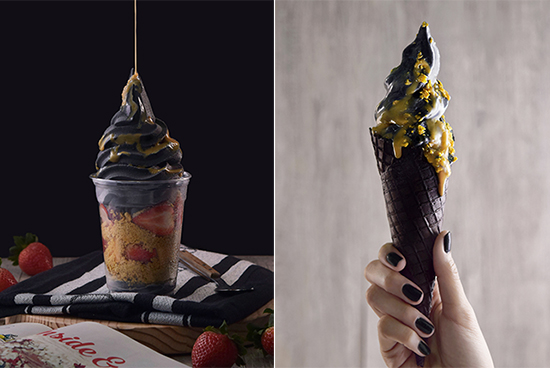 This is certainly not a place for you to go on a first date. BLK 513’s specialty is charcoal-enhanced frozen yogurt, and after a few licks, you tend to look like you just finished a plate of squid-ink pasta. BLK 513’s yogurt will be a hit with those who like their bacterial milk fermentation (LOL!) on the tart side. Adding active charcoal supposedly helps in detoxification, anti-aging, bloating, and heart health. BLK 513 uses only U.S. premium, gluten-free, all-natural Greek yogurt.

BLK 513 is at SM Megamall Building A, Mandaluyong City. Read more about BLK 513. 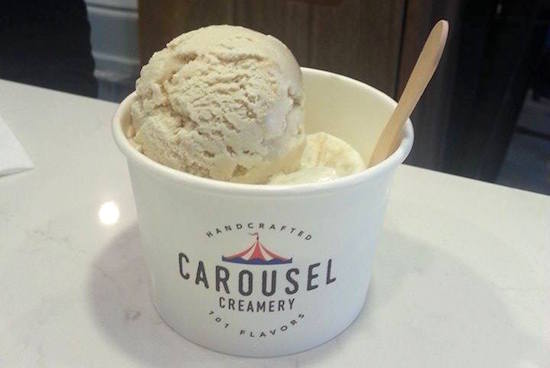 Get dizzy with this store’s whopping 101 flavors. It’s like an entire library for ice cream. Carousel has every flavor you can think of—and then some. Here, you’ll find regulars like chocolate and vanilla, quirky iterations like Pumpkin Spice and Red Velvet, and novelties like Pinoy Beer and Chicharon. If your taste buds need a break from the ice cream, they also have great coffee and a couple of savory dishes. 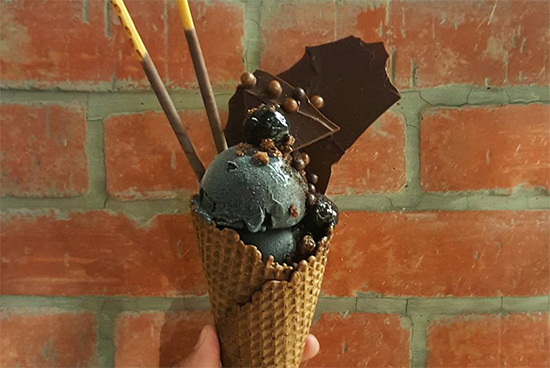 The ice cream tends to be overshadowed by the cakes and soufflés, but when Le Petit Soufflé came out with a squid-ink flavor, we sat up and took notice. Their menu is akin to a smooth-talking Casanova: a titillating experience that never lasts. Chefs Miko Aspiras and Kristine Lotilla are dessert artists and they always have new ideas. The dolled-up parfaits-in-a-cone are totally TDF. 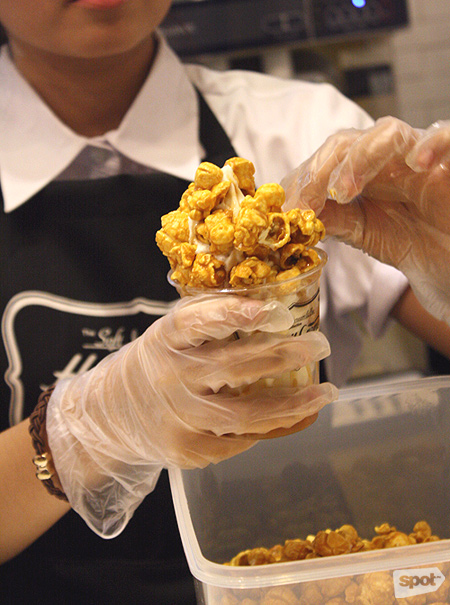 This is a Taiwanese franchise that sells outstanding Korean soft-serve. It’s not at all sweet, which allows you to be playful with their toppings. Of course, the basic but not-so-basic honeycomb (imported from New Zealand) is all the sweetness you’re ever going to need. If you’ve ever tried Honey Crème in other countries before, then you’ll agree that the treats in the Philippine outlets taste better. The Manila branch has a different milk supplier, and that subtle difference really changes the pace of this ice cream. 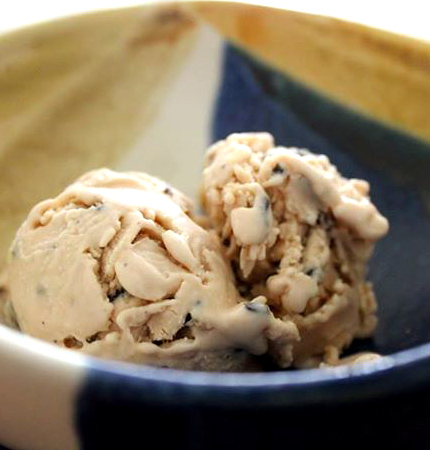 Papa Diddi, the store’s namesake, was a lawyer and closet ice cream-maker who loved churning out flavors he could make from their farm's produce. This ice cream parlor is his son’s tribute to his memory. Not all the ingredients are from their farm, but owner Paul Perez makes sure to make local a priority. Everything is also made in small batches to assure utmost freshness. Think of it as third-wave—for ice cream.

We hear they’re coming out with new flavors soon, too! 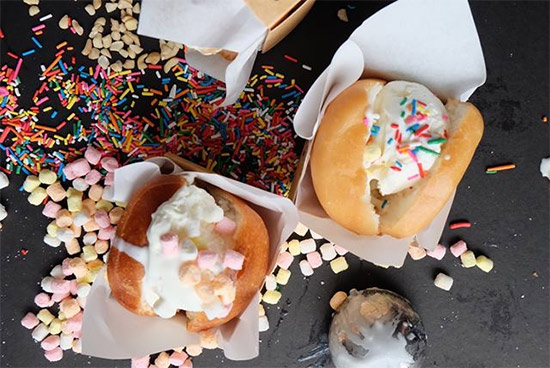 The sweet folks behind Sweet Degrees don’t make their own ice cream. Instead, they curate favorites from other ice cream purveyors (anything with Carmen’s Best is A-OK in our book). What we love is what they do with that ice cream. Their affogato is stellar, but their ice cream sandwiches have us hooked. Instead of using plain ol’ bread, they use mantou buns fried crunchy. It’s a great play on textures. By the way, they told us they have plans of pairing ice cream with—wait for it—fries!