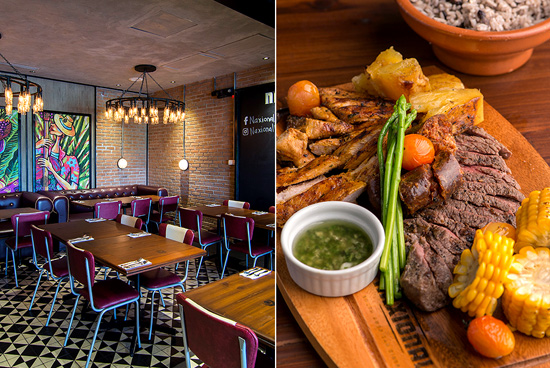 (SPOT.ph) Raymond Magdaluyo fell in love with Latin American cuisine in New York. He had stumbled into Coppelia, a 24-hour Latin American diner, and the experience led to a passion that followed him all the way back to Manila. He planned to open Naxional in the north, but decided against it. His idea was too raw, too half-baked to compete with the modern Filipino's demand for better food and authenticity.

Two years later, Jun Sunga approached Raymond. Jun, his wife Vanessa Matsunaga, and her brother Daniel, wanted to open a Brazilian restaurant. Raymond then told them about that day—when he fell in love with a New York-based diner that married the flavors of 10 different Latin American countries. The three were sold on the idea and the Matsunagas enlisted the help of their Brazilian mother who got them started on the ins and outs of Brazilian home cooking.

Drinks are a must.

Those "paintings" are stickers.

Naxional's menu is extensive but coherent, thanks to the efforts made by the owners to develop a harmonious eating experience. A good place to start is with their Guacamole & Chips (P395). Naxional labels their dishes with their country of origin, so you get a bit of an education, too. The made-from-scratch sweet potato chips, fried plantains, and tortillas with an avocado dip are from Mexico, one of two featured countries that are Latin American, but not South American (the other one is Cuba). Make sure to share the bowl so you'll have room for the Salpicao en Fuego (P345). It may be an appetizer, but we can only imagine how good it would be with black beans and rice.

For customers with tamer appetites, the Caldo Verde (P195), a chicken potato soup with spinach and picnic fries, is a nice, simple meal that still manages to hit the spot. It's marked with a photo of a motorcycle (a 1939, 500cc bike, to be precise) to illustrate how “badass” it is.

The Steak Elote (P759) was inspired by an unsuspecting customer who ordered his meat with a side of Naxional's Elote (P195), corn on the cob slathered in chili butter before it's grilled and seasoned with mayo lime and crumbled cheese. The customer shredded the corn and mixed the kernels with the grilled sirloin to seemingly positive results. The Naxional team watched him devour his meal with gusto, and thought that it was a good idea. The menu version comes with Tajin spice, seared asparagus, and sirloin steak sprinkled with shredded corn.

For people who can’t choose, the Churrasco Especial (P1,350) makes decision-making easy-peasy. Good for two to three people (or one really hungry person), it combines grilled sirloin, chimichurri chicken, morcilla, charred pineapple, and black beans and rice all in one delicious offering. If that still isn’t enough, the elote is a good addition to this extensive platter, too.

Their Tarte Tenación (P175) is a great way to end the meal. This tart features a flaky dough filled with caramelized fried plantains and served à la mode. Flower petals and strawberry slices add a whole new layer of flavor to the already rich dessert.

The Latin spirit is captured without being too thematic.

An instrumental version of Shakira's "Hips Don't Lie" plays in the background. Large stickers that act convincingly like paintings cover the walls. Empty plates, full bellies...it's easy to fall in love with Naxional.

Fort Uptown Parade South American Naxional City Guide
Your Guide to Thriving in This Strange New World
Staying
In? What to watch, what to eat, and where to shop from home
OR
Heading
Out? What you need to know to stay safe when heading out