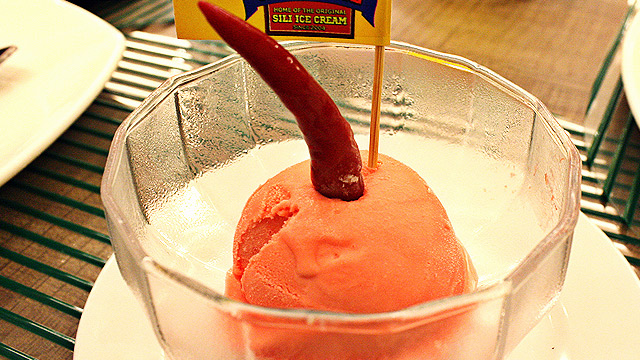 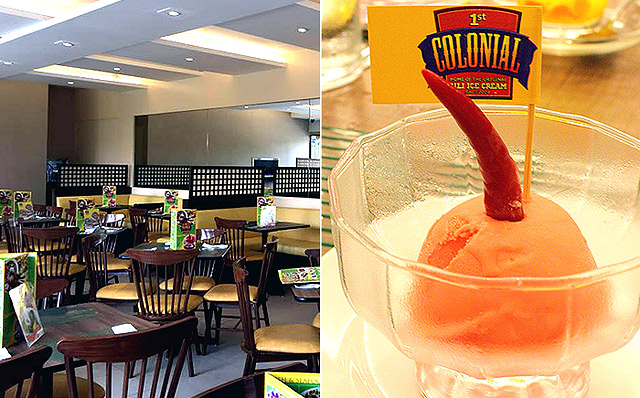 (SPOT.ph) Aside from its tourist spots, Tagaytay City in Cavite has grown to become one of the most well-known food hubs in the country. There’s the classic Josephine’s, which has been around since the mid-‘90s; Sonya’s Garden, which is perfect for the vegetarian who wants to escape from the hustle and bustle in the Metro; and Antonio’s, including all permutations thereof such as Balay Dako and its all-day breakfast resto. Enter 1st Colonial Grill, the neighborhood’s newcomer with a very unique dessert in tow—sili ice cream. 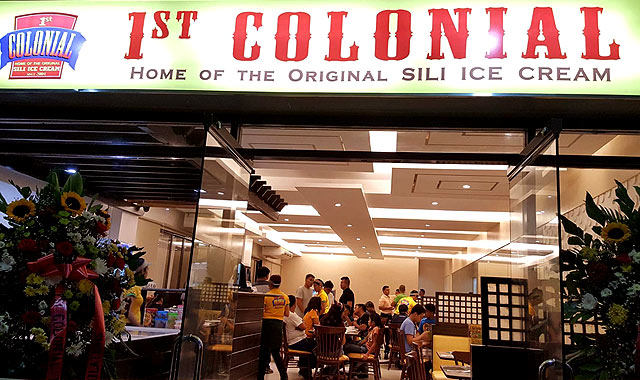 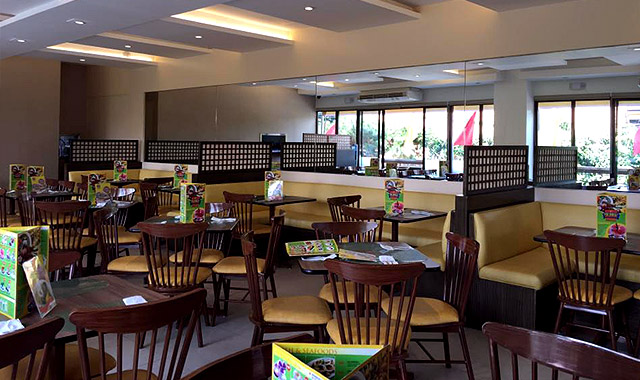 Technically, 1st Colonial Grill is not entirely new. The Bikolano restaurant owned by Bong Aspe opened in 2004 at Daraga, Albay and has since made its mark not only in the food business but also in the tourism industry. It opened four other branches across the region, including Legazpi City and Naga City. The Tagaytay unit, which opened on June 1, 2016, is the very first franchise. As it turns out, the firsts never run out as it is also Silang-based Christian Leynes’ first venture in the restaurant business, being more familiar in food carts and printer supplies. 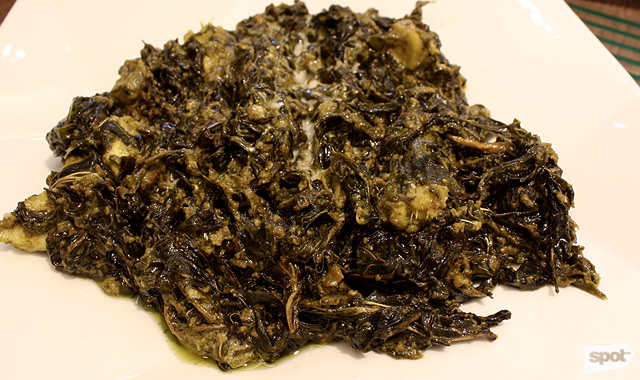 When asked why he chose to franchise 1st Colonial Grill near Manila, he immediately beamed about Bicol’s savory dishes which are prepared to perfection by the restaurant’s chefs. In true Daraga fashion, their bestsellers include the Laing (P199), made from dried taro (gabi) leaves cooked in coconut milk (gata) and shrimp cake, and Pinangat (P129), which is also made of gabi leaves but simmered slowly in gata. Morsels of pork and salted shrimp are also tossed in the mix. One bite of either can easily transport you to the land of coconut milk, a staple ingredient in Bikolano cuisine. 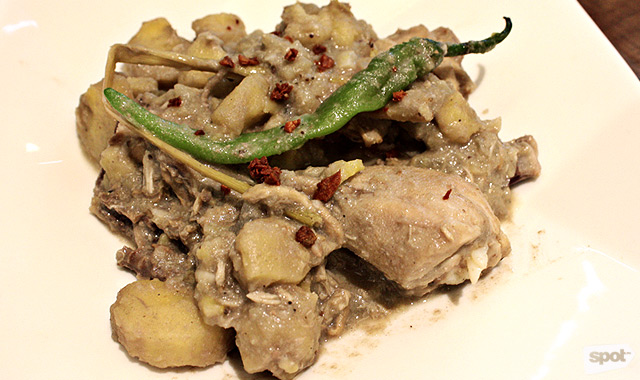 But the mother of it all is the Tinutungang Manok (P345), an authentic Bikolano dish made of chicken and green saba mixed with ginger, lemon grass, and sili. All these are simmered slowly, again, in coconut milk. What makes it different though is that the gata is cooked in high heat using coal until it reaches that tutong (burnt rice) taste, lending a smokey flavor to the chicken. 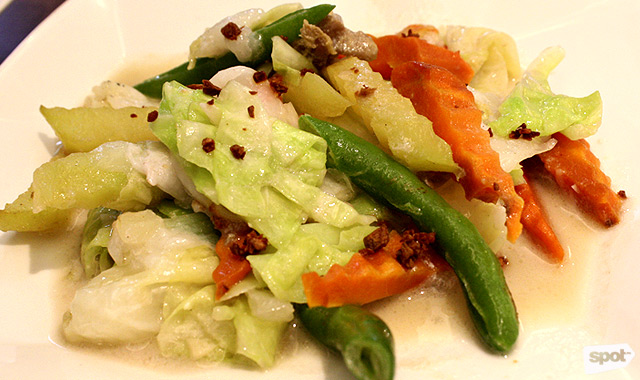 Coconut just cannot take a break from 1st Colonial Grill’s menu. Even an ordinary vegetable dish is taken to another level by glazing it with gata and topping it with slices of coconut meat to make Buko Chopsuey (P269). It’s like an explosion of sweetness and bitterness in your mouth. 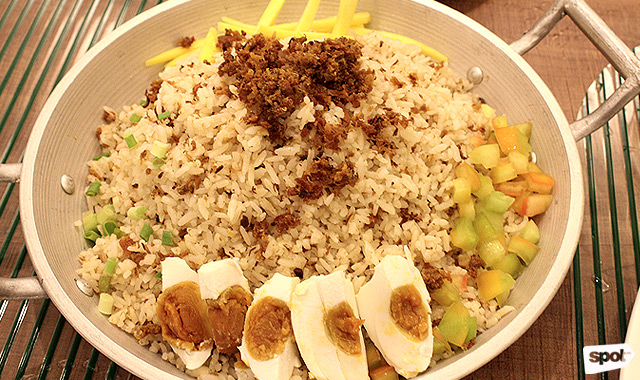 Tinapa Fried Rice (P255), another must-try, is the epitome of the famous phrase “kanin pa lang, ulam na.” Tinapa flakes, salted egg slices, sweet tomatoes, and green mangoes are all thrown in with the fried rice in a pan large enough to satisfy two people. 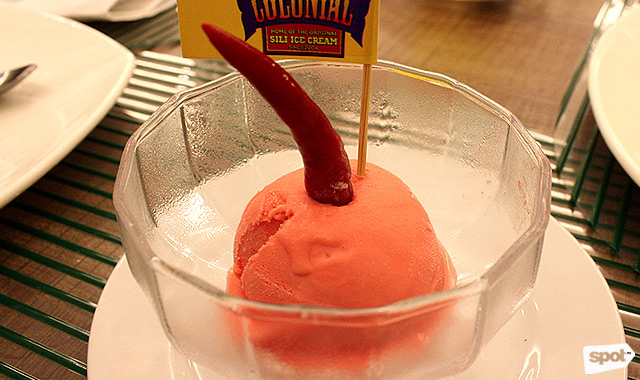 Now comes the best part—desserts, of course. 1st Colonial Grill – Tagaytay has 13 flavors of ice cream in its menu: gabi, salabat, cacao, pili, tinutong na bigas, melon, calamansi, coffee, vanilla, pipino, malunggay, kamote, and sili. Each cup costs P99 for three scoops. The sili flavor, being the flag-bearer (it's literally served with a flag on a toothpick) of the franchise, comes in three levels of spiciness. Letting a teaspoon melt in your mouth can be likened to a heartbreak—first comes the sweetness, which you’ll let linger on your tongue, then comes the kick of the spicy sili. The twist will make you wonder why you allowed yourself to taste it in the first place, but you’ll do it all over again for sure.

Renato Jao, a Bikolano photographer and one of the regions’ go-to guys when it comes to promoting local tourism, shared a pro-tip to cap off our visit at 1st Colonial Grill – Tagaytay: Drop a spoonful of sili ice cream in a cup of hot coffee. Sweet, bitter, spicy—now our tongues are confused but delighted.

Bikolano Bicol Tagaytay 1st Colonial Grill
Your Guide to Thriving in This Strange New World
Staying
In? What to watch, what to eat, and where to shop from home
OR
Heading
Out? What you need to know to stay safe when heading out