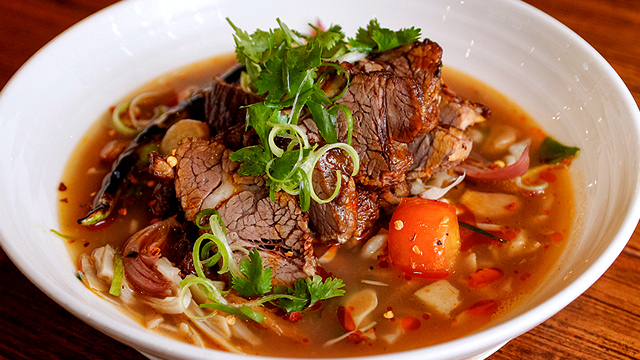 They're switching it up with Filipino food. 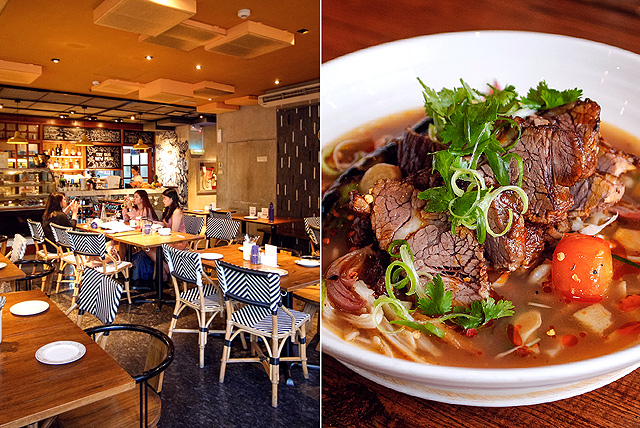 (SPOT.ph) It’s been a good two years for Crisp on 28th, the Mothership group’s semi-hidden, French-inspired neighborhood café in BGC. They’ve built a reputation for serving up healthy fare and killer desserts. But like all good things, they’ve grown and evolved, and they have new menu items to celebrate their second anniversary.

“A lot of people think of us as just a café or a place to get coffee,” shares marketing manager Bianca Magtoto. “[But] we wanted to turn the attention back to our full meals.” More than that, they want to feel more accessible and approachable—because that’s what a neighborhood café should really be about. 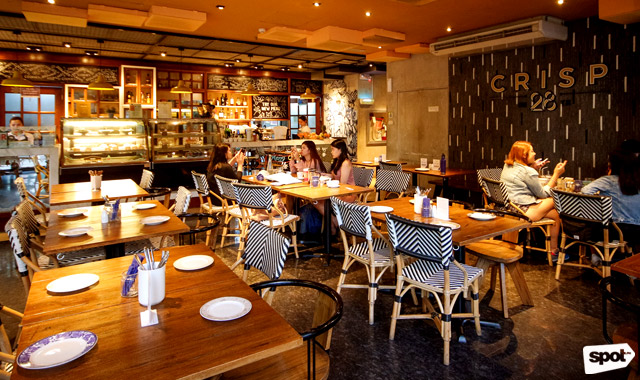 They’re turning a new leaf with a more Filipino-centric selection—a welcome change from their former mostly Western backbone. “But we still put our own twist to it,” shares executive sous chef Siggy Torrente. “We still want to be different.” You’ll find Filipino cuisine favorites either in different forms or with influences from other cuisines. That way, it’s both familiar to Filipinos and accessible to foreigners—many of whom are eager to try what the country has to offer. The best part? Many of the new dishes are now available in sharing portions. After all, our food is best shared. 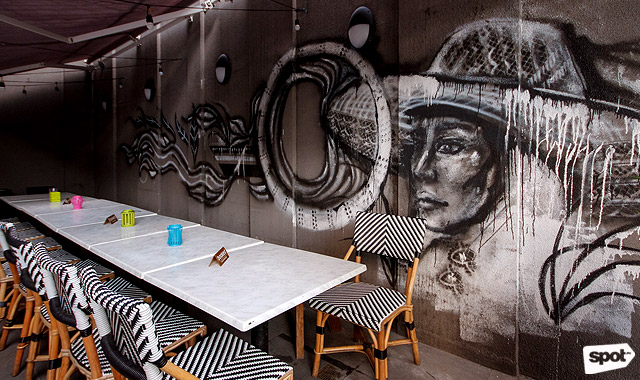 Chef Siggy isn’t afraid to experiment. “When I see something I think, ‘if I add this, it’s still going to work,’” she shares. “I don’t put boundaries on what I do.” Having stayed in Dubai, Northern Ireland, and London over the years, her exposure to other cultures—their food and their ingredients—has certainly paid off. And it shows in the eclectic nature of their offerings: local ingredients are incorporated into foreign dishes, or foreign ingredients into local dishes. Somehow, the integration is seamless. 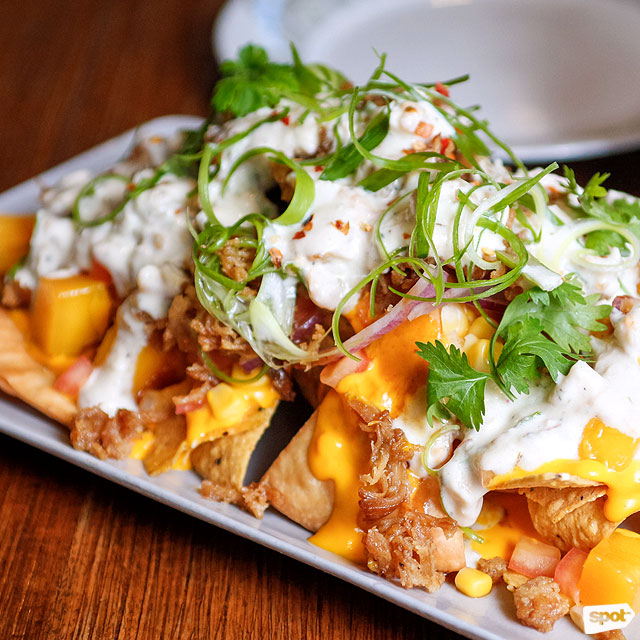 For casual munchies, go for their small bites, which are perfect to pair with any of their beverages. They cover the essentials—calamari, chicharon, chicken wings, and the like—with their own spin. The Chicken Adobo Nachos (P280)—their take on the quintessential bar chow—are unlike any other, with two kinds of chips (tortillas and nachos), coriander garlic cream, confit garlic aioli, salsa, coriander, adobo flakes, and mango. It sounds crazy, but it works—you get both creaminess and zing with the satisfying chew of the adobo flakes. 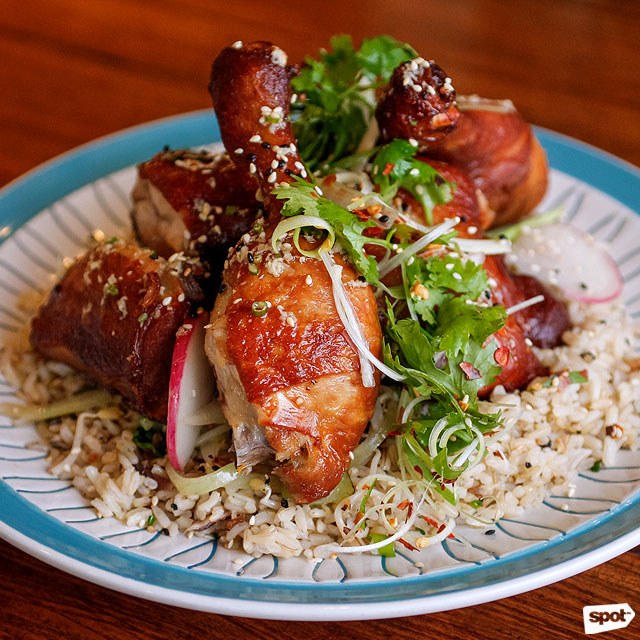 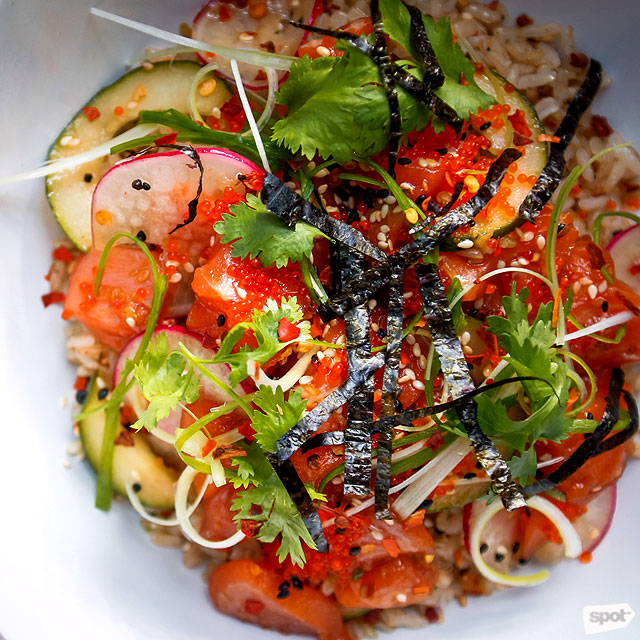 What’s great about their plates is that many of them are full meals on their own, complete with protein, carbs, and veggies for balance. There’s the Sesame Roasted Chicken (P340/solo, P640/sharing), highlighting chicken pieces that are cooked in three steps: first boiled in soy, roasted, then fried to a crisp upon ordering. Stir-fried Asian greens peek out from underneath with tuyo brown rice, and a final splash of ginger scallion sauce ties everything together. For a fresher one-bowl dish that’s equally filling, go for the Spicy Salmon Poke Bowl (P430), with salmon, togarashi, nori, tobiko, and pickled cucumbers, on a bed of furikake brown rice. 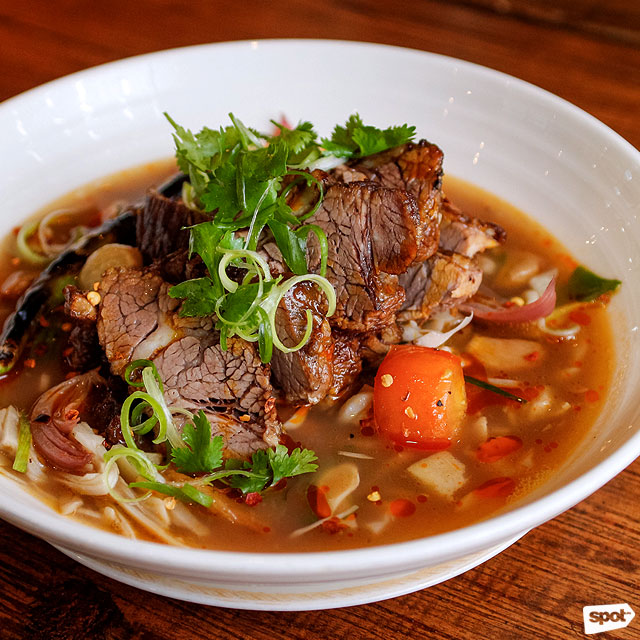 Though they’re no longer doing weekly specials, they’ve taken the best of previous ones and made them permanent items on the menu. Among them is the Kansi Nasal (P360/solo, P680/sharing), originally created in collaboration with Solenn Heussaff. Here, the flavors of inasal—atsuete and lemongrass—weave their way into the sour Ilonggo soup. Tender slices of brisket and langka relish (made with unripe jackfruit, which turn soft and starchy when boiled) on top make for an absolutely comforting dish. 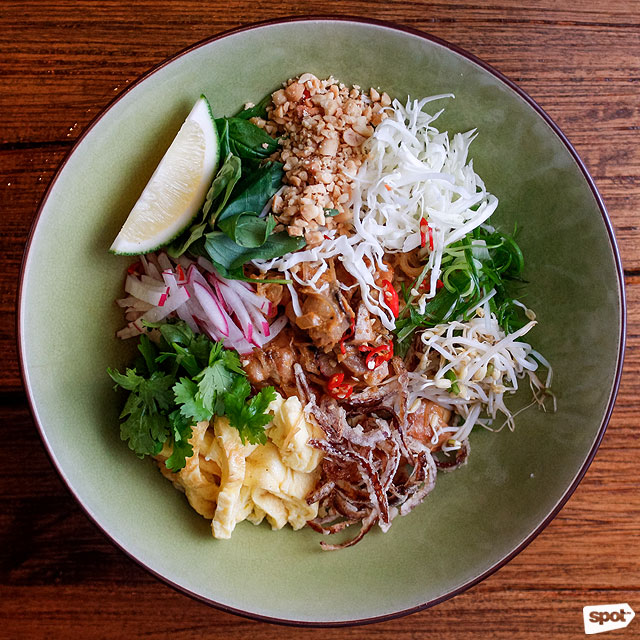 Another former special made permanent is the Pancit Pad Thai (P320): bihon noodles with a tamarind-peanut sauce, topped with lemongrass chicken strips, scrambled eggs, peanuts, bean sprouts, cabbage, and Thai basil. Squeeze the lime and mix it all up for a dish that’s equally sweet, tangy, salty and spicy. No wonder it’s become one of their bestsellers. 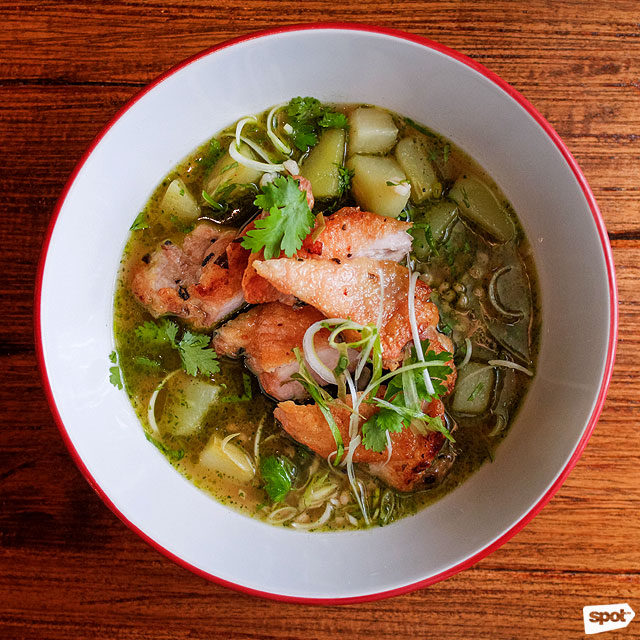 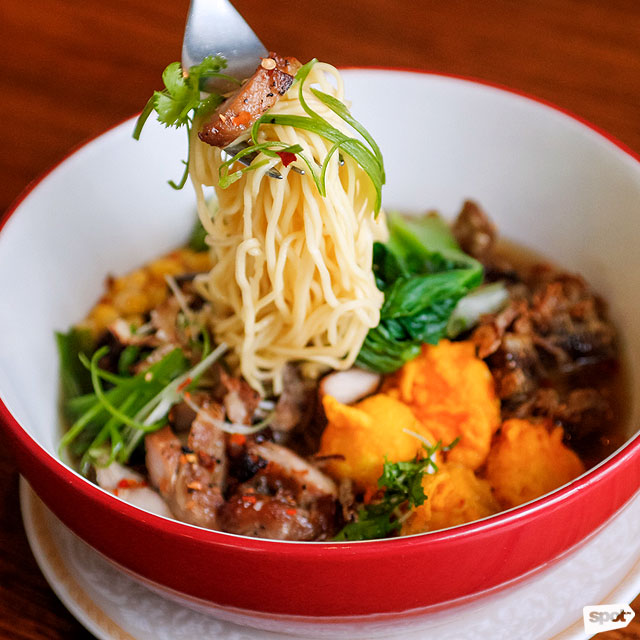 Be sure to make room for soup on the table—they’re hearty and delicious, especially during this time of the year. Looking to go lighter? Go for the Lemongrass Tinola Bowl (P390)—one of Chef Siggi’s favorites—which comes with a pan-fried fillet of chicken thigh, pearl couscous, chayote, and malunggay pesto in an invigorating lemongrass-ginger broth. But if you must sin, get the street food-inspired Manila Ramen (P320), which combines pork liempo, chicharon bulaklak, and kwek-kwek (!) in a broth base made with pork and beef bones.

Carmela Villegas-Agosta of Casa San Luis pastries still handles most of the desserts—and you don’t have to worry, because they’re retaining their best-selling calamansi cake, among others. But a sweet new surprise awaits in the form of the Milo Silvanas, created by Chef Siggy. Here, the chocolate drink powder’s malty notes add depth to the luscious layer of buttercream in the middle.

It’s really no wonder Crisp on 28th continues to be a popular destination. Come here by yourself or with family; there’s something for everyone, any time of the day. You always leave feeling nourished, taken care of—and that’s something that never gets old.

Crisp On 28th Filipino Food Bonifacio Global City New Menu
Your Guide to Thriving in This Strange New World
Staying
In? What to watch, what to eat, and where to shop from home
OR
Heading
Out? What you need to know to stay safe when heading out