You can also have their milkshakes to-go! 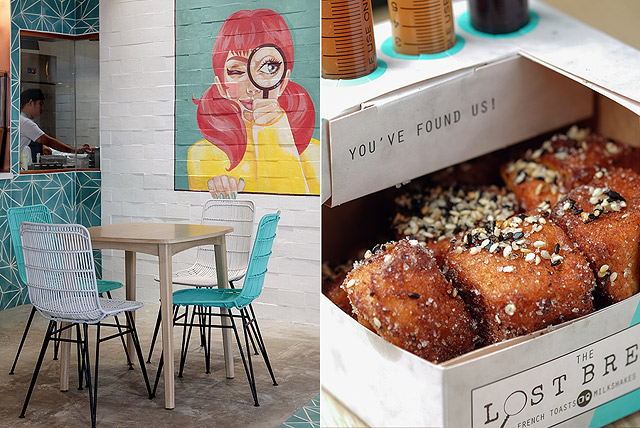 (SPOT.ph) If you’re a regular at their branch along Maginhawa Street, you might feel a little lost (pardon the pun) when you enter The Lost Bread at SM Mega Fashion Hall. Don’t worry; their first mall branch is still the same milkshake and brunch place you love—just spruced up differently. 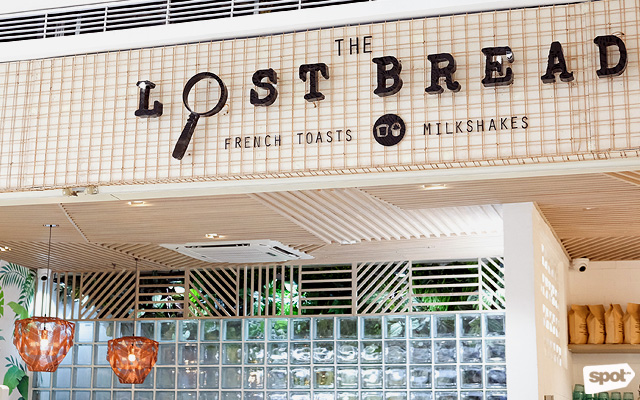 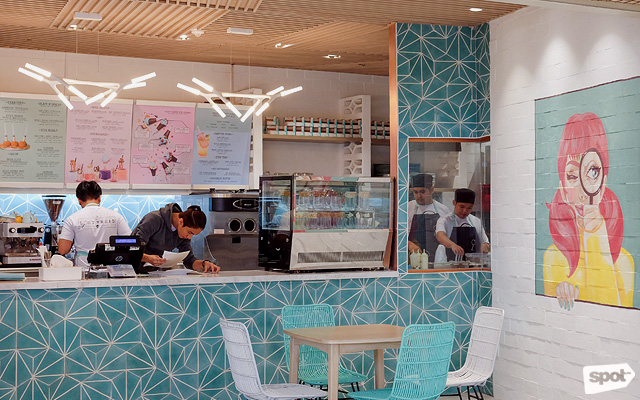 Stepping away from the industrial vibe and mostly monochrome décor of their sibling in Maginhawa, the Mega Fashion Hall branch is brighter, bursting with color from walls painted in pastel-colored geometric designs and an accent mural by illustrator Kay Aranzanso. Their signature “grass” wall is still around, though instead of grass, they now use jungle leaves encased in a glass wall. The overall effect is sunny and inviting. 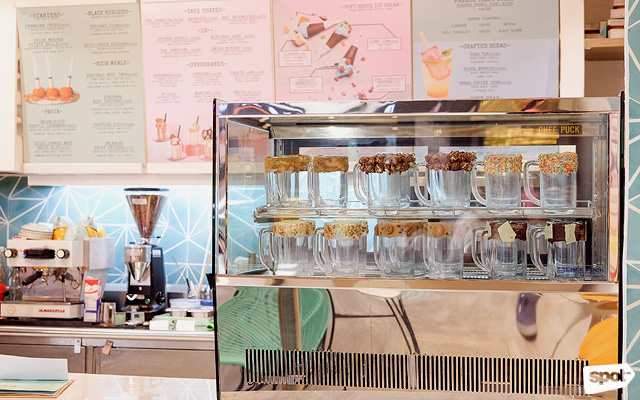 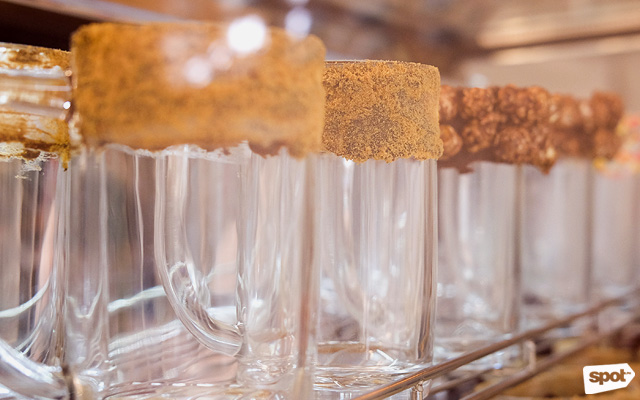 One other detail that makes the newest branch different is their focus on take-out. Patty shares that it’s to make up for their limited dining space. “Some customers feel that they can’t order anymore once they see na puno na,” she says, but since they introduced a take-out queue, potential diners aren’t so disheartened anymore.

Plus, you can now enjoy their colorful Overshakes and Cake Shakes while strolling through Megamall. And if you’re worried your shake might not look as Instagram-worthy, fret not because the drinks look exactly like their dine-in counterpart, except now in a convenient to-go cup. 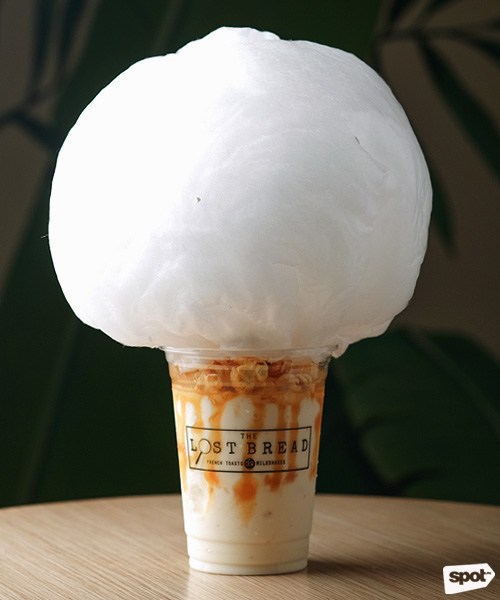 The Carnival (P180), for example, is still the same butter cake-flavored milkshake you fell in love with at StrEAT and HQ, with caramel popcorn and cloud-like cotton candy spun on the spot. It can be a challenge to lug this around while shopping but it’s one we’ll hurdle for the sake of sugary goodness. 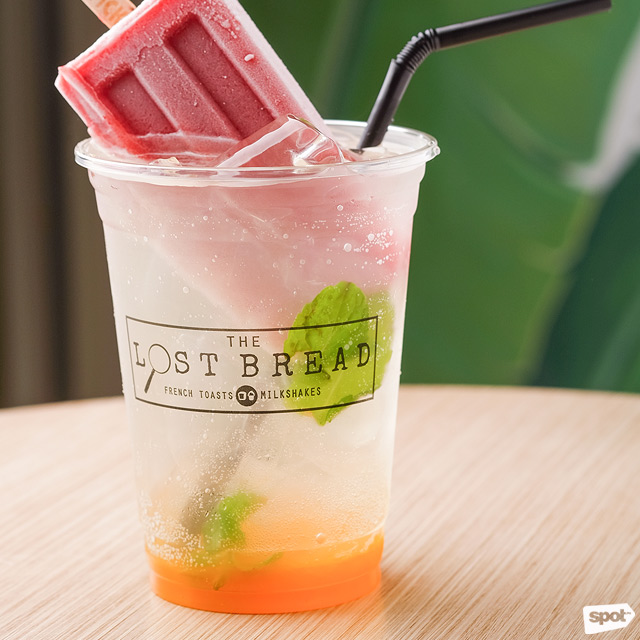 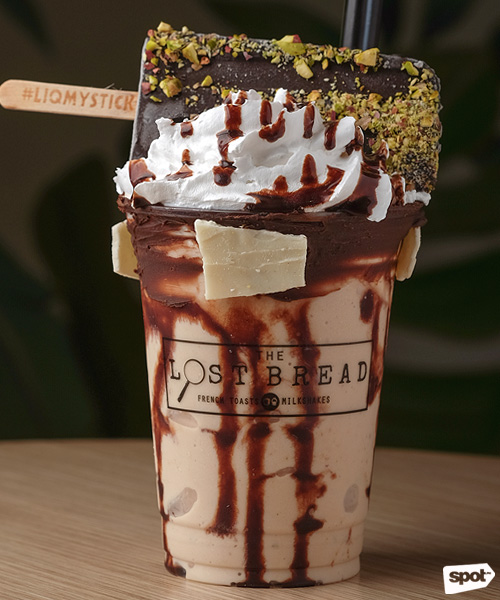 If you love The Lost Bread’s Soda Pop (P180) because of its fresh strawberry popsicle from Liq the Spoon, you’ll enjoy the Popshake (P295). A chocolate-covered banana popsicle is the centerpiece of this drink, with an intense banana flavor that gives the chocolate-hazelnut shake candy-like sweetness. 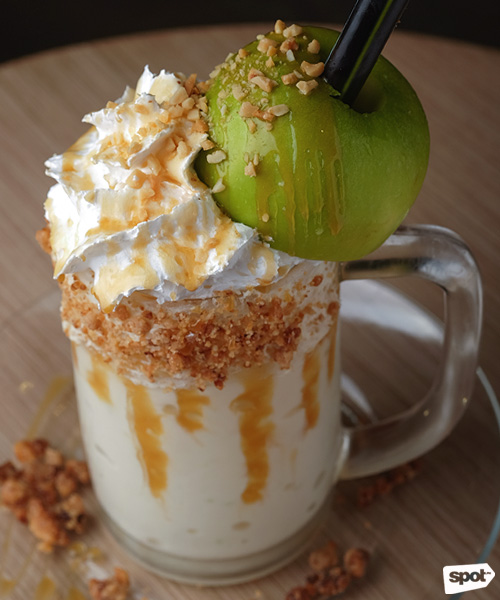 The A+ (P280) is like an apple pie in drink form, with sugary strudel and tart apple bits in a vanilla milkshake base. Though not as sweet as the other shakes, sugar is still definitely present through the caramel syrup and white chocolate ganache. 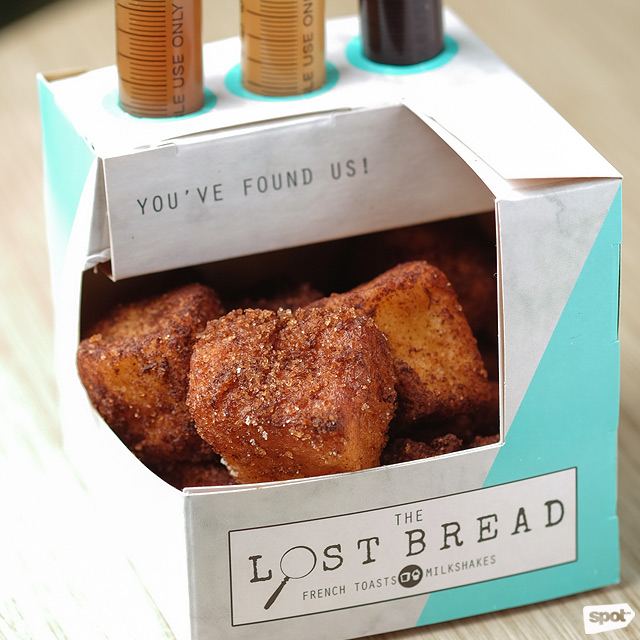 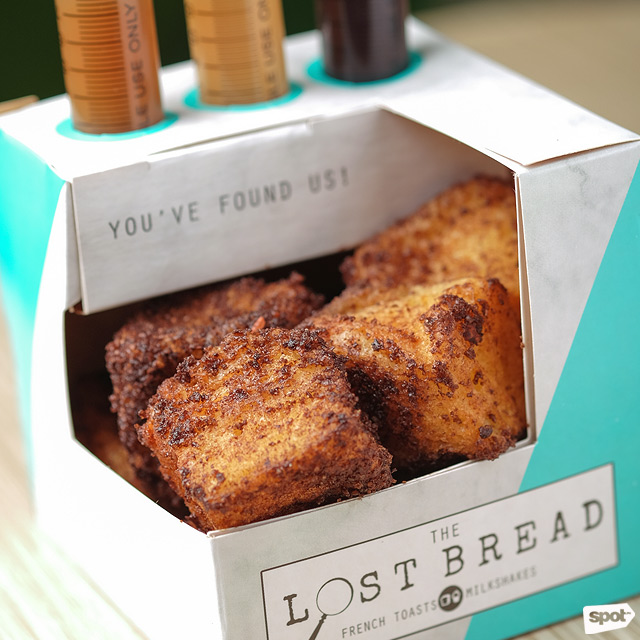 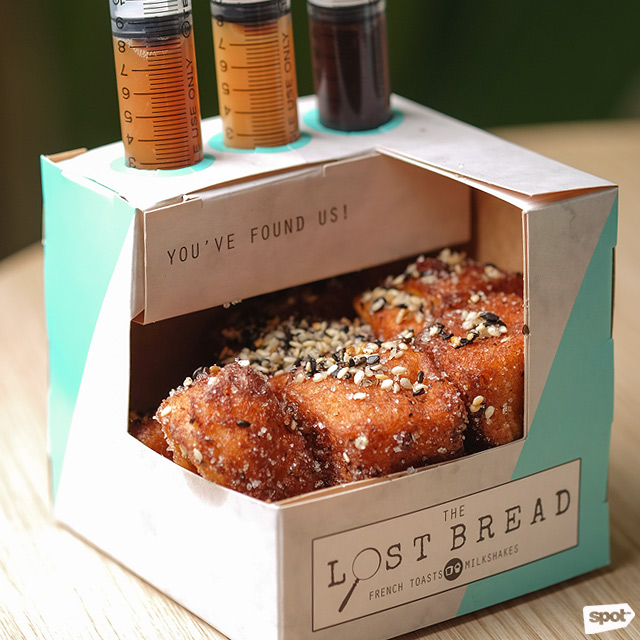 While the milkshakes often take center stage, what is The Lost Bread without bread—specifically their signature French toast? At their latest branch, they’re introducing a new item that also comes in nifty take-out packaging: French Toast Cubes (P180). Golden brioche toasts are chopped into cubes and then covered in your choice of flavored sugar from the classic Cinnamon to the Chili Chocolate, which has a hint of spiciness that catches you by surprise at the end of your bite. The cubes come with three kinds of syrup that are served in syringes: Dark Chocolate, White Chocolate, and Caramel.

But while there are many to-go options, do take a seat in one of their colorful wicker chairs and linger when the space allows. The Lost Bread also offers light meals, snacks, and burgers to go with their drinks. 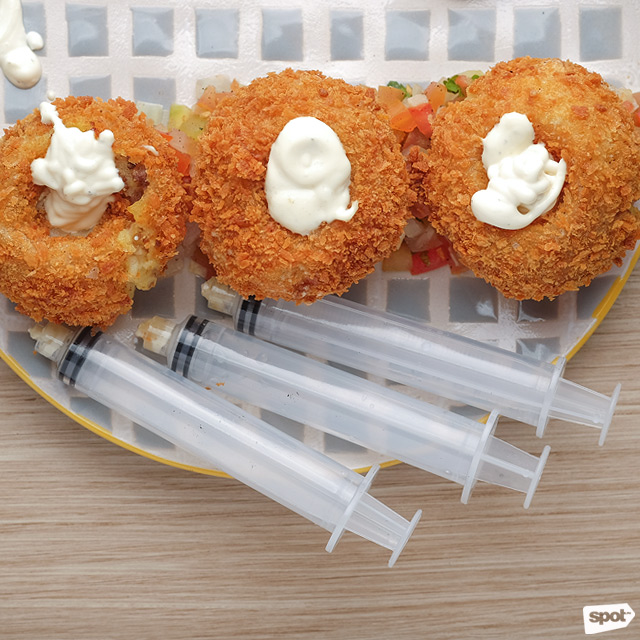 The Fried Mashed Potato Balls (P180) are the perfect light snack to go with your milkshake. Emil shares that he was inspired by potato balls and nachos, mashing the two together to create this delicious fusion. Each crunchy ball bursts with velvety mashed potato that’s given a kick of umami flavor by cheddar, with bits of ground beef adding texture. The potato sits on a bed of pico de gallo that’s refreshingly zesty and comes with a syringe of herbed sour cream. 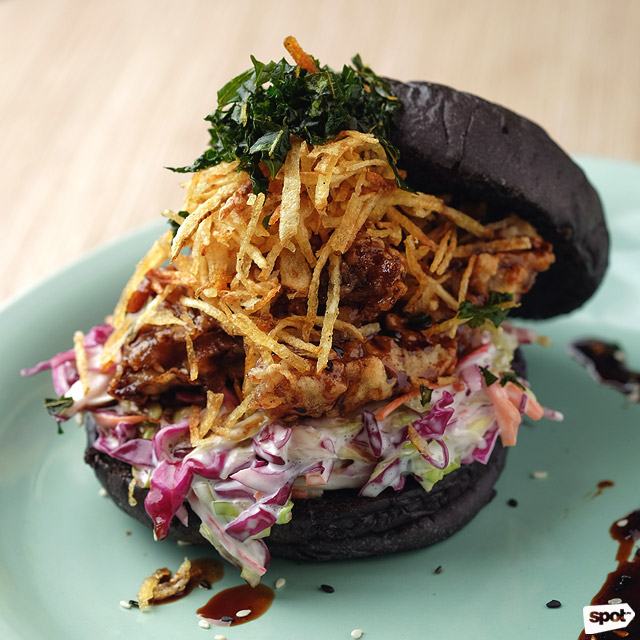 If you’re hungry for something heavier, you will appreciate The Lost Bread’s hefty burgers. The Teriyaki Fish’s (P250) fish fillet is lightly breaded and seasoned, making it the perfect base for lots of punchy flavors: from smoky teriyaki sauce to a kani coleslaw that adds an intense briny flavor and shoestring potatoes for crunch. The squid ink-infused brioche buns can barely contain its massive elements. 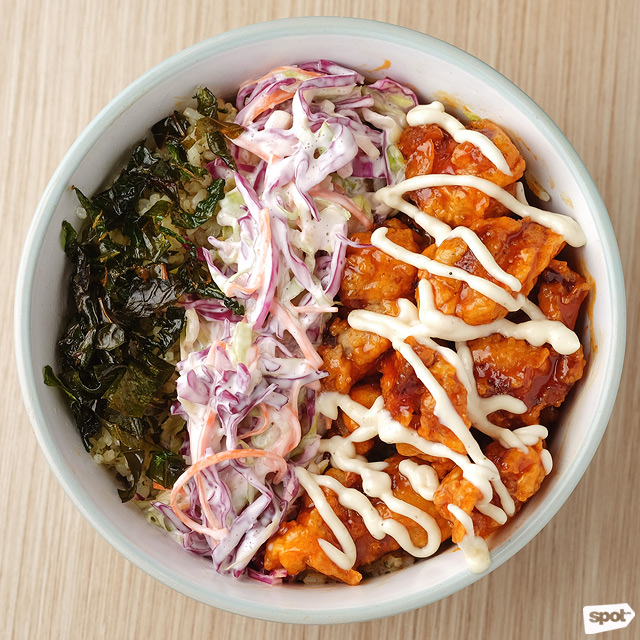 But if there’s one new dish you cannot miss, it’s the Sriracha Fried Chicken (P270). The first thing you will notice once you pop a piece of chicken in your mouth is that unmistakable decadent flavor only butter can provide (and they do fry their chicken in butter!). The reddish hue of the breading might make you hesitate if you're averse to spiciness, but the heat only kicks in as an afterthought, and a subdued one at that. Mix it up with the crispy nori, cool coleslaw, and the garlic cilantro rice for the perfect Asian-inspired bowl.

Four branches in less than two years may seem like too many in too short a time for other less intrepid teams, but this duo has no plans of slowing down, with more café-inspired branches up their sleeves. “Hopefully, you see us in more malls,” says Emil, “And soon enough in Cebu too, if things work out.” And with the delicious surprises they come up with in every new branch, we can’t wait to see what else The Lost Bread has in store.