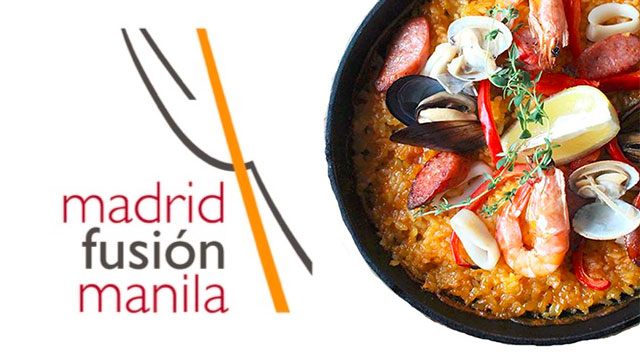 What's going to happen at Madrid Fusión Manila 2017 and why should you care?

It's really more interesting than it sounds.

(SPOT.ph) And here we go again. Some would say it’s the year’s biggest culinary event: from April 6 to 8, chefs, restaurateurs, journalists, and everyone who’s passionate about food will be converging on the SMX Convention Center beside the Mall of Asia for Madrid Fusión Manila, a.k.a. three days of intense conversation about food.

It may sound like just another industry event, but what really makes Madrid Fusión Manila special is that aside from thinking and talking about food, there’s a lot of actual food going around. For many, the highlight of the event are the regional lunches; in fact some journalists have been known to eat multiple plates at lunch and then quietly snooze away in a dark corner of the session hall during the 1:30 talk. (In my defense, I woke up very early that morning.)

There are two lunch teams operating concurrently, and complementarily to one another. One is a more formal affair commissioned by the Department of Tourism, and is meant to showcase traditional Filipino dishes. On the first day they do Luzon, the second Visayas, and the third Mindanao—a nice introduction to local cuisine for foreign guests. The Department of Agriculture also runs a set of curated lunch offerings. I once said that if I ever used the word curated for anything that isn’t an art exhibition you should shoot me, so I use it now with great caution—but in this case I think it’s appropriate because there is a lot of curating going on.

The Department of Agriculture (DA) has departed from the traditional regional focus for each day, and are now working around themes. The first day will be centered around the theme of rice; which I initially protested because of the risk of impacho and people dying of bangungot en masse in the plenary hall. (But see, this is where the curators come in.) Day Two will be centered on nose-to-tail eating; for those who aren’t into offal, there’s a lot of the animal that’s not nose nor tail but the bits in between. I’m not sure about vegetarians but I suppose the nose-to-tail of various vegetables will also figure somehow. And Day Three will be a rhapsody on the theme of corn, which not only hearkens back to the Spanish and New World connection of Madrid Fusion, but is also an eye-opener as to how pervasive this crop is in our everyday life.

If for nothing else, go for the lunch: these are some of the most creative and inventive chefs working today; and they’ll be doing things that they don’t get to do in their restaurants. I’ve never been anything less than surprised and thrilled by what they come up with. Presiding over everything like a general is JJ Yulo, who has been promoted to "kitchen manager"; the credit, though, for making everything happen goes to Berna Romulo Puyat, who gets everyone to put aside ego for Team Philippines.

To whet your appetite, here’s a rundown of the participants for each day’s lunch menu. For more information on the plenary speakers, and to sign up for slots, head over to www.madridfusionmanila.com.

For more information, check out www.madridfusionmanila.com.

*Update: JJ Yulo was originally identified as "curator-in-chief" in this article. This has since been corrected.

Department Of Agriculture Department Of Tourism Filipino Food Chefs Restaurants Food Madrid Fusion Manila
Your Guide to Thriving in This Strange New World
Staying
In? What to watch, what to eat, and where to shop from home
OR
Heading
Out? What you need to know to stay safe when heading out