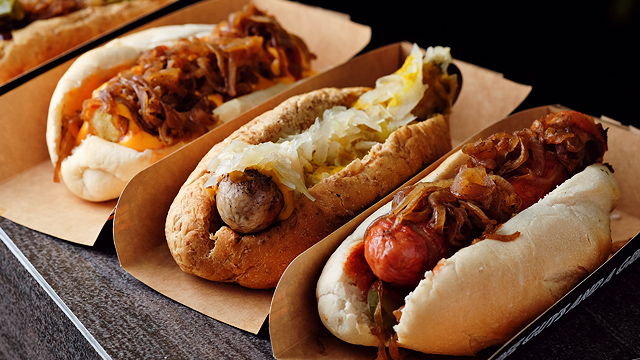 Three Guys and a Grill Puts the Spotlight on Great Sausages

Toppings take a backseat at this new Poblacion hangout.

Three Guys and a Grill 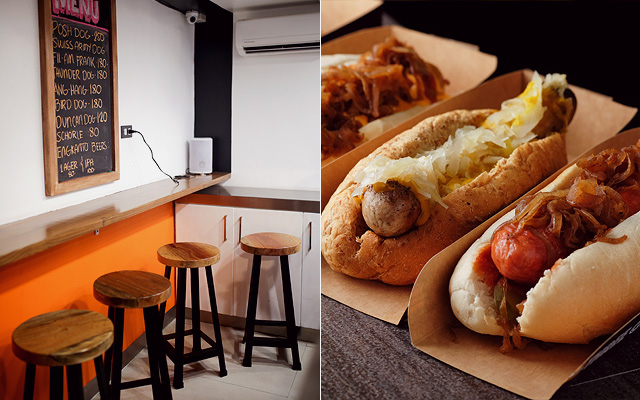 (SPOT.ph) The plan was simple: “We want to make good sausages available to people in the way Filipinos especially like to eat it—in a bun with toppings,” says Tom Thurnherr, one of the three guys behind Three Guys and a Grill. Together with friends Duncan Gates and Frank Shrope, they set up a small unassuming spot in Poblacion, Makati City, grilling sausages and baking bread fresh, every day. 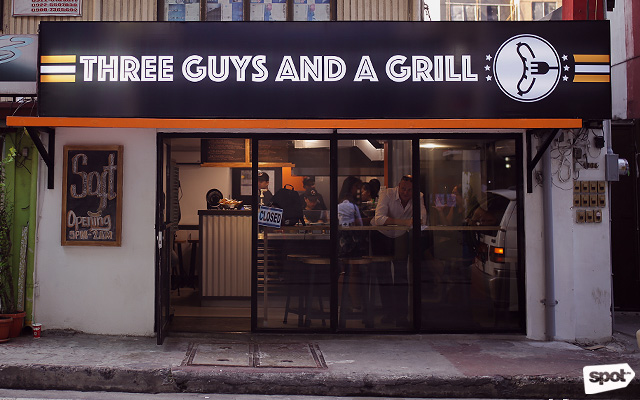 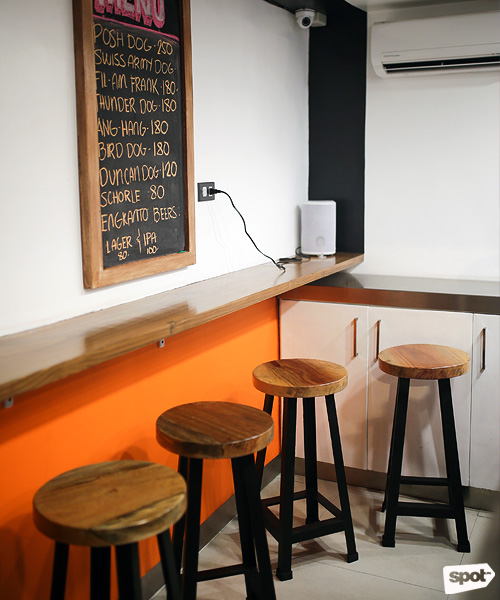 But while the concept to doubters may seem typical, the execution certainly isn’t. The trio use only locally sourced ingredients, from their sausages (custom-made to their specifications by Santi’s) to their bread, toppings, and sauces. “The bread is locally produced,” says Tom. “We get it 90% baked then we finish it in the oven when you order so you always get freshly-baked bread. Our ketchup and barbecue sauce are also made by us. We use all-organic ingredients: organic honey from Davao, molasses from Bicol. We have mustard which we add local guava to and we have another mustard where we add honey from Bukidnon. I can say 90% of our ingredients are local, whatever's possible.” All their meat’s local too, except for lamb—and only because they couldn’t find a reliable supplier in the Philippines.

This all-local approach is something the three had planned from the start. “In the long run, I think it’s what would make us more successful,” says Duncan. “Plus, the quality is great.” 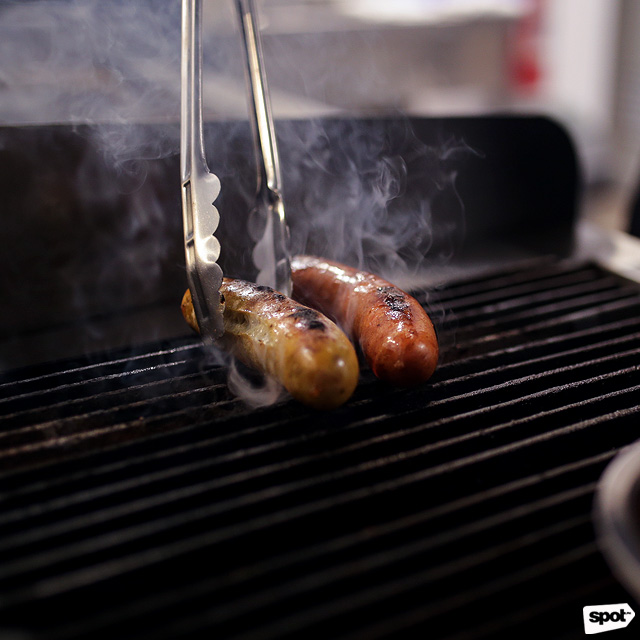 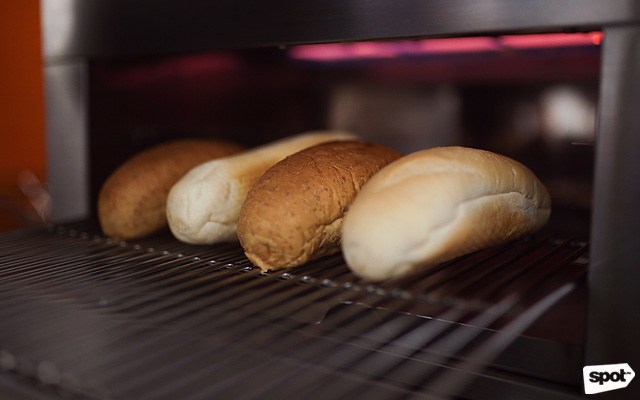 But having ingredients of the highest quality is only half the battle—there’s getting the right formula of sausage, bun, and toppings down pat, too. “It might look simple when you look at the menu,” says Tom, “But we spent days and days and days getting that formula right.”

At Three Guys and a Grill, they specialize in what Duncan and Tom call “European-style hotdogs,” which isn’t the same as the usual overloaded sloppy sandwiches you might be more familiar with. “Our focus really is on the bread and the sausage,” says Tom. “The toppings and sauces really are just add-ons. That’s the biggest difference.” 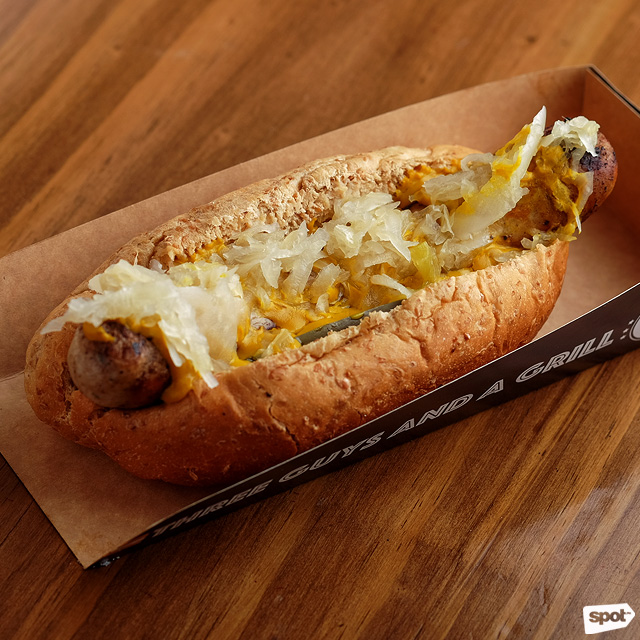 The toppings do take a backseat to the powerful spice of the chicken curry sausage in the Bird Dog (P180), which is also Tom’s favorite sandwich of the bunch. “A lot of people think it’s just boring chicken,” he shares. “But we add curry powder to ours so it tastes just like curry.” While the sausage could stand on its own with its punchy flavors, sliced pickles add a welcome tang, with Sriracha mayonnaise adding just the slightest amount of heat. 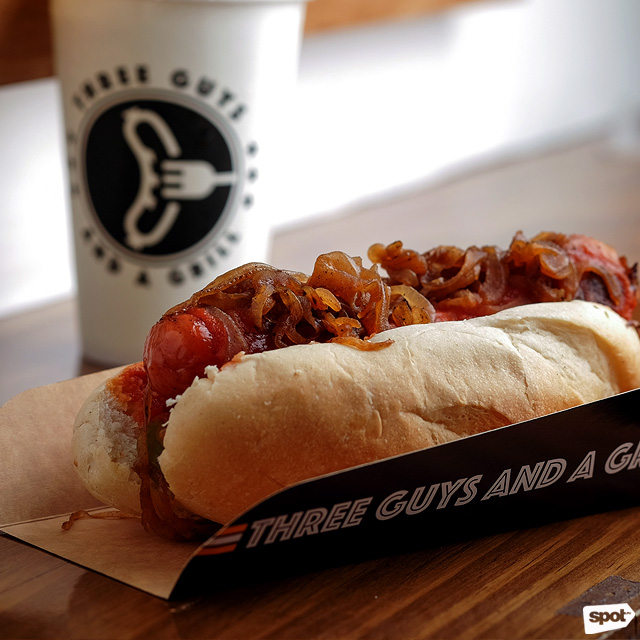 For something a little more classic, have the Swiss Army Dog (P180). The traditional Swiss schublig will remind you of Vienna sausage except better (and of course, fresh off the grill), with only sliced pickles and grilled onions to add some sour-smoky flavor. 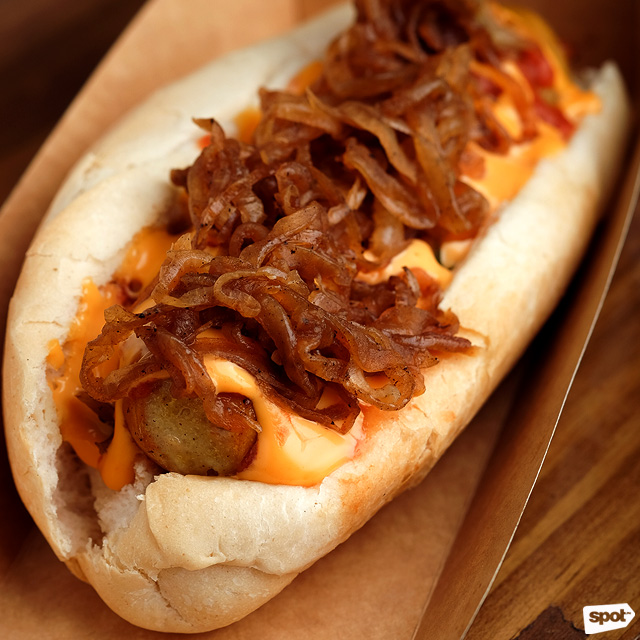 The snappy and slightly smoky German pork bratwurst is also undoubtedly the star of the Thunder Dog (P180), with the fruity guava mustard and sour pickles working together to bolster its flavor. 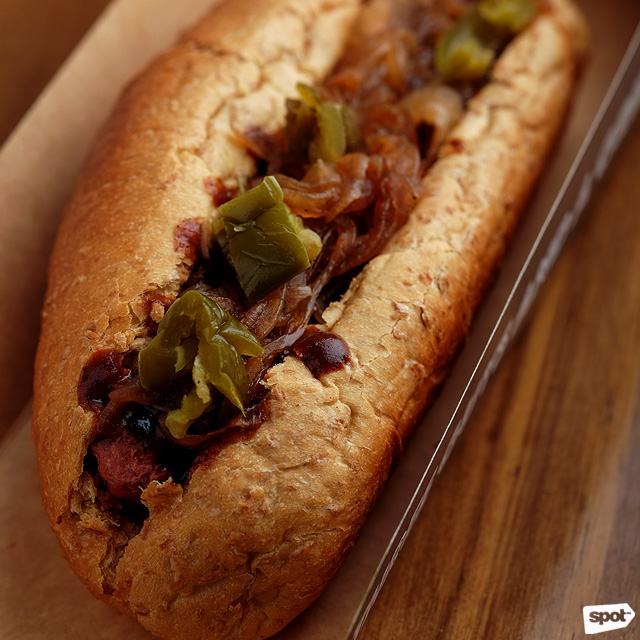 If you’re not afraid of spicy food, have the aptly named The Anghang (P180). Instead of bombarding your mouth with spice, this sandwich builds up flavor through the peppery lamb sausage, and then the homemade barbecue sauce, with the generous sliced jalapeños adding to the final explosion of heat. The result lets you enjoy more than just spiciness—the smokiness of the lamb, too, and the way the warm toasted buns bind everything together. 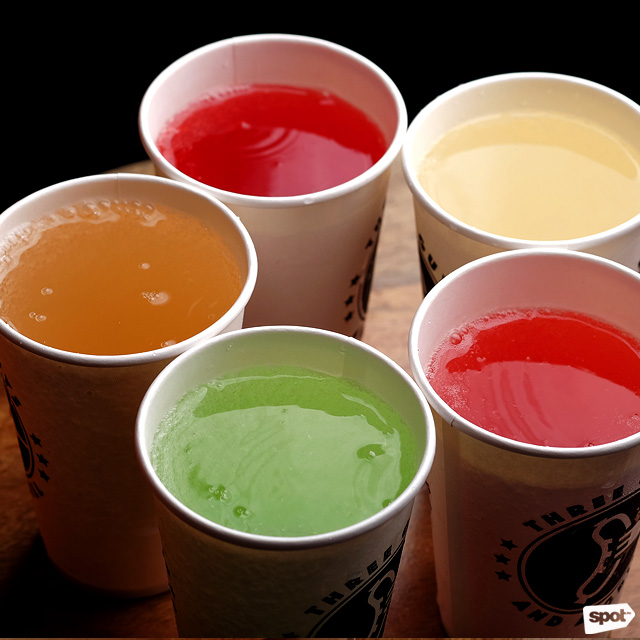 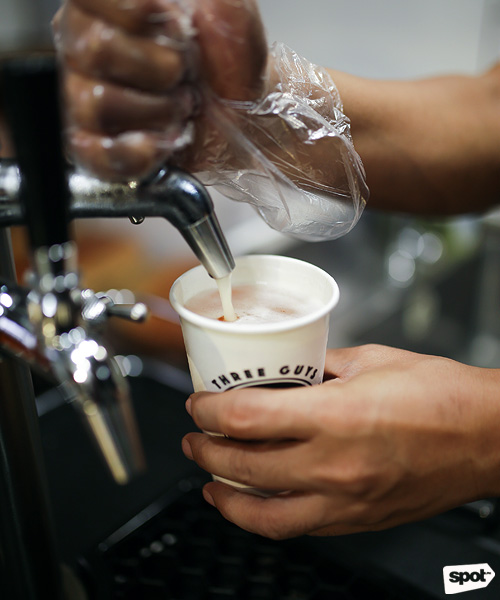 Wash down your sandwiches with The Flavored Sparkling (P60/12 ounces)—to keep up with the team’s commitment to serving an all-natural menu, they make their sparkling water in-house and add their own syrups. Or you could have your sausage with beer instead—Three Guys and a Grill gets theirs from local craft brewery Engkanto Brewery. Don't leave without grabbing a couple of Iced Gems (yes, the childhood snack) (P20/pack).

Three Guys and a Grill want to be more than a hotdog joint. “It’s not just a food business,” shares Duncan. “We want to create tasty food, something that hasn’t been done this way before, while also reaching out and helping local communities.” From their business model to their really tasty hotdogs, it looks like the three guys are accomplishing that and more.

Makati City Poblacion Three Guys And A Grill Sausage Hotdog
Your Guide to Thriving in This Strange New World
Staying
In? What to watch, what to eat, and where to shop from home
OR
Heading
Out? What you need to know to stay safe when heading out