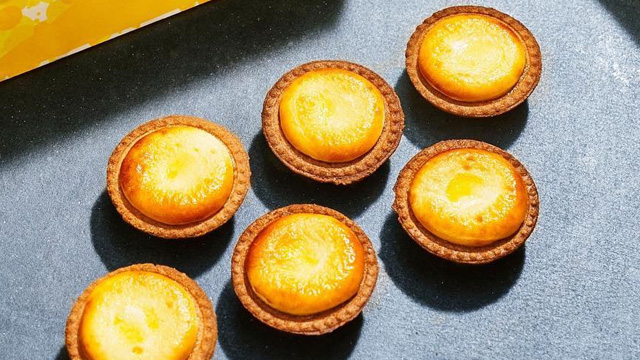 (SPOT.ph) Though admittedly not as buzzy as before, cheese tarts are still as addicting as ever. You might even find your obsession returning before the year ends as BAKE Cheese Tart is now in Manila! The cheese tart shop from Tokyo will have two branches: Their Podium branch is now on soft opening, and their Rockwell Power Plant Mall branch will open on January 11, 2018.

BAKE Cheese Tart is an offshoot of popular Japanese bakery Kinotoya, with the tarts created by the son of Kinotoya's founder, Shintaro Naganuma. Shintaro tweaked Kinotoya's blueberry cheese tarts, focusing only on the cheese and serving them toasted instead of chilled to create Kinotoya's cheese tarts. In 2014, Shintaro opened BAKE, which sold only the cheese tarts, in Tokyo, Japan. Queues started forming, and soon, BAKE branches opened in Hong Kong, Thailand, South Korea, Singapore, and now, the Philippines.

BAKE uses a blend of three kinds of cheese from Hokkaido and one from France poured on top of a double-baked golden crust. The result is a delicious contrast from the flaky crust and creamy cheese, with the whole tart leaning towards the sweet side with a hint of zest. You'll want more than one of these tarts, paired with coffee or on its own.

BAKE Cheese Tart Cheese Tart The Podium Rockwell Cheese Tarts Power Plant Mall
Your Guide to Thriving in This Strange New World
Staying
In? What to watch, what to eat, and where to shop from home
OR
Heading
Out? What you need to know to stay safe when heading out