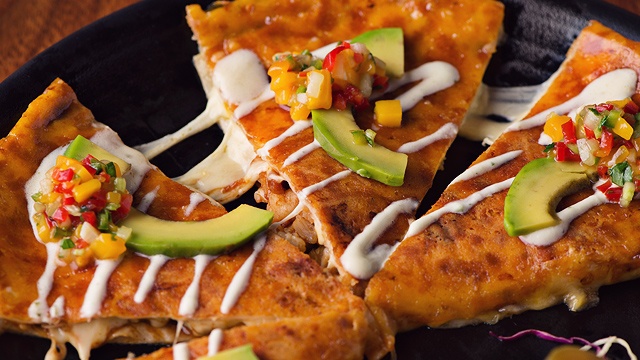 Why choose between tacos and Korean barbecue when you can have both?

(SPOT.ph) While everything Korean is buzzy nowadays, it’s safe to say you haven’t had Korean food the way Vatos Urban Tacos does it. 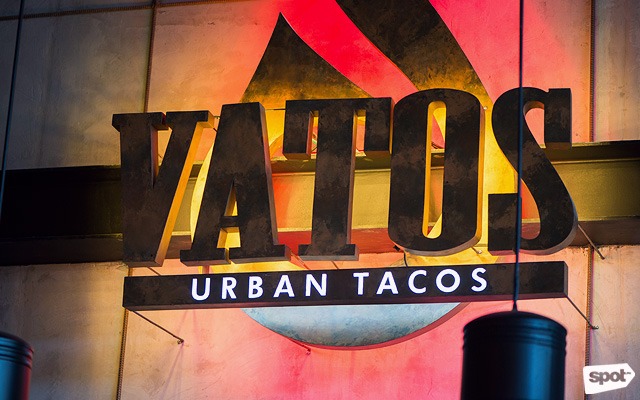 Yes, you read that right: Vatos is a Mexican restaurant, or more accurately a Korean-Mexican one. It’s a fusion that sounds strange, a fact that co-owner Sid Kim knows quite well. But for the Korean-American restaurateur, no combination is more natural. “If you’re Korean-American and you grew up in California or Texas or New Mexico, you [are] surrounded by great Mexican food,” says Sid, who grew up in Southern California. “But you still ate Korean food at home.”

“My parents used to run a small appliance store and most of our employees were Mexican,” he adds. “During lunch, I remember my mom would pack Korean food and our employees would have a bunch of Mexican food and we'd share and mix it up and we'd eat it. So I grew up that way.” 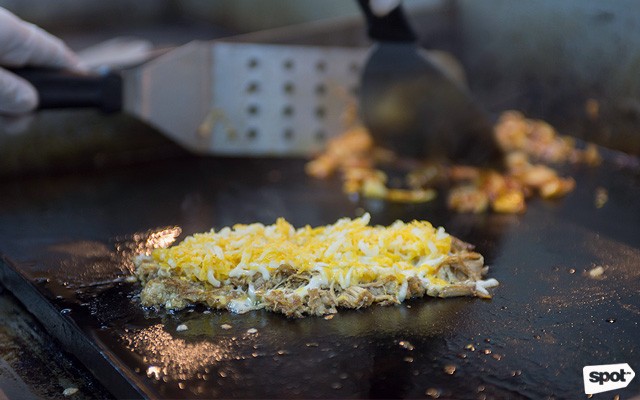 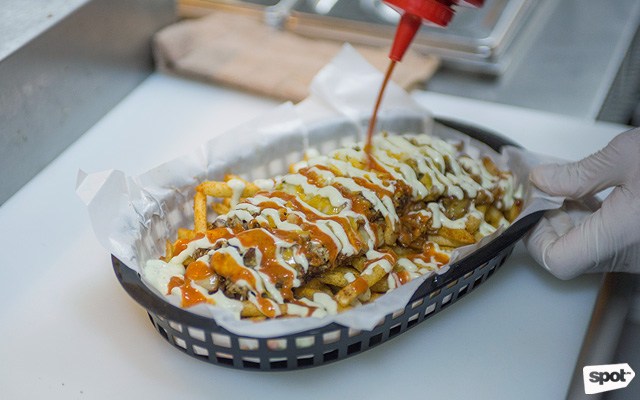 For Sid, the fusion is natural; he recalls making tacos with leftover tortilla and bulgogi as a 10-year old hungry boy after a long school day. “A lot of people think Korean food and Mexican food have nothing in common,” he says. “But when you think about it, both are spicy, both have a lot of braised or grilled beef, and both have a lot of grilled vegetables. And when you eat at a Korean barbecue place, what do you do? You take some grilled meat, place it on lettuce with pickled vegetables and hot sauce, and wrap it up. It’s just like eating a taco.” 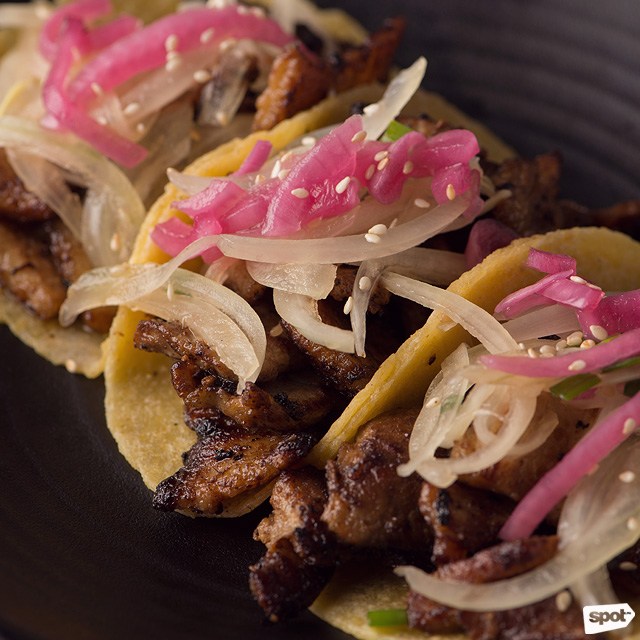 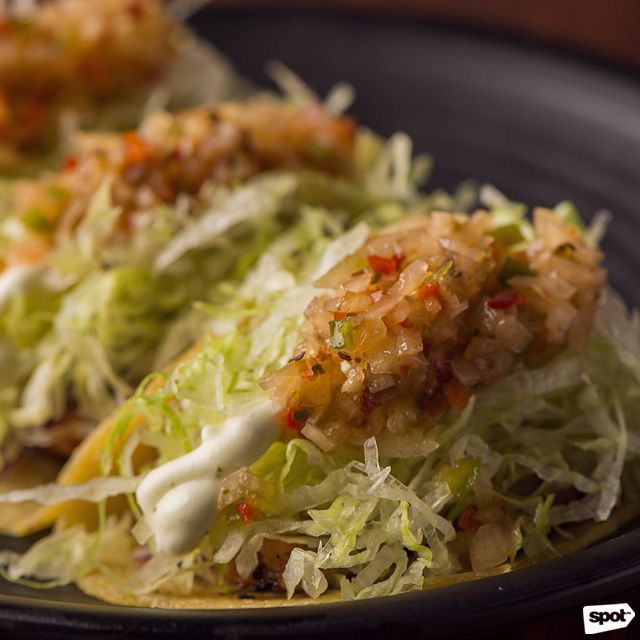 You can also get more traditionally Mexican flavors in your tacos with the Chimichurri Chicken (P280/two tacos, P380/three tacos)

It’s the same experience Vatos wants to evoke with their Korean-inspired tacos, like the Korean Pork Belly (P320/two tacos, P450/three tacos). The grilled pork belly is fatty and succulent, and paired with the crunch and tang of the pickled vegetables, it’s just like eating a Korean barbecue wrap, except perhaps heftier with the addition of the freshly made tortilla. 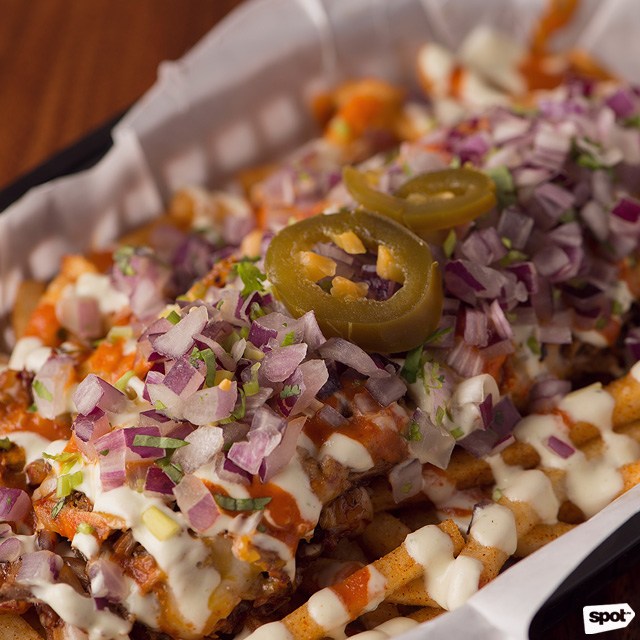 More Korean influences can be found everywhere else on the menu. The Kimchi Carnitas Fries (P390) is one of Vatos’ most popular signature dishes in South Korea for good reason. Sid calls this his American tribute to gamja-tang or Korean pork stew with potatoes—he trades cubed potatoes for French fries and pork back-bone for braised shredded pork. Add kimchi, sour cream, cilantro, onions, and lots of melted cheese, and you get an unforgettable starter with sour, spicy, smoky, and sweet all playing in harmony on your taste buds. 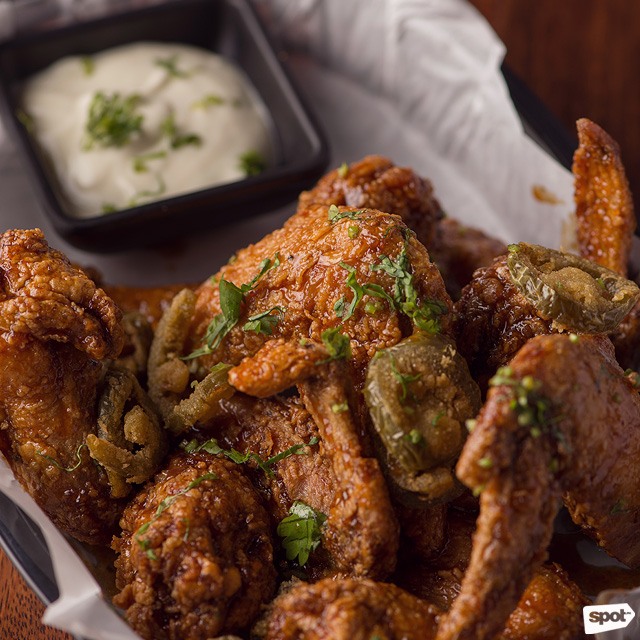 Another Vatos special that’s not to be missed is the lip-smacking Honey Tequila Chicken Wings (P420). Think Korean-style fried chicken wings that are glazed in a sticky-sweet-and-spicy honey tequila sauce. The wings pair well with the homemade blue cheese dip, the sharp cheese providing a subtle tang that balances out the sweetness of the wings’ glaze. A basket also comes with deep-fried jalapeños you won’t be able to stop popping in your mouth. 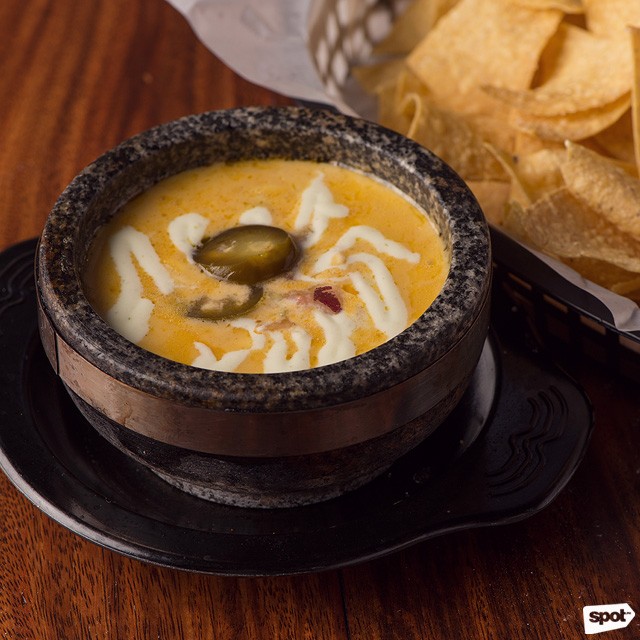 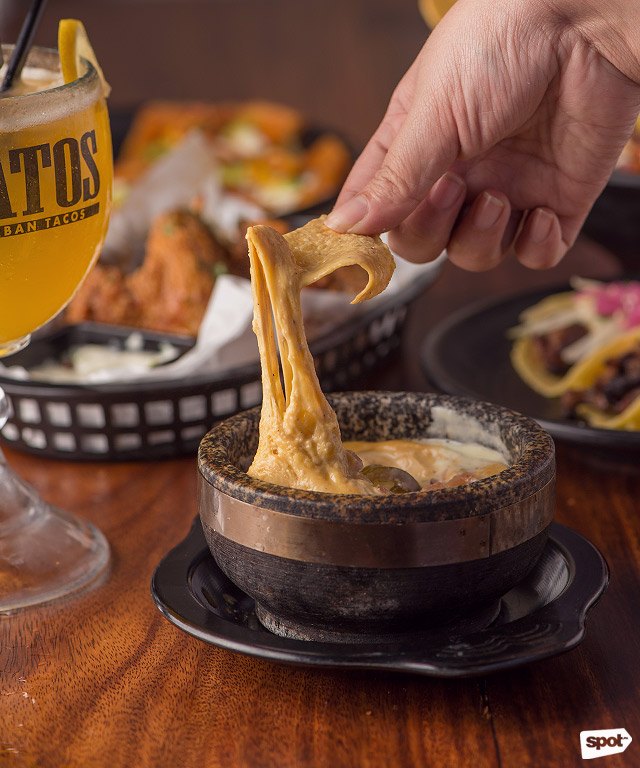 Look at that amazing cheese pull! 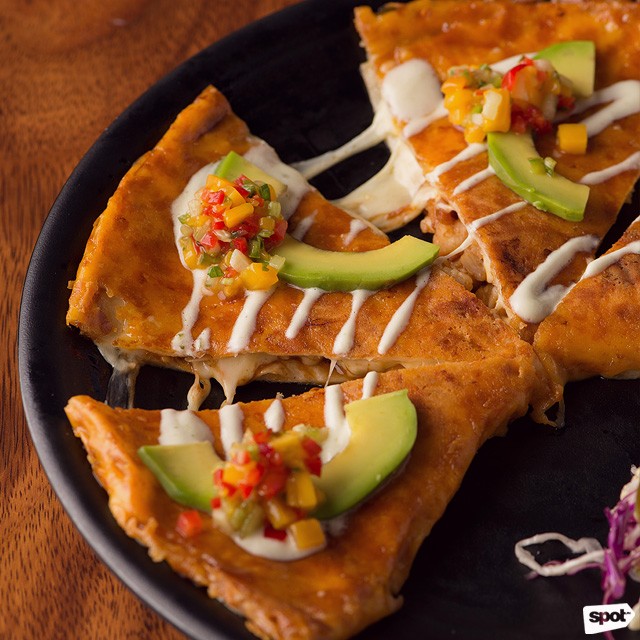 Of course, with Mexicans’ and South Koreans’ shared love for gooey melted cheese, it’s no surprise an extra cheesy dish is on offer, too. The Vatos Cowboy Queso (P390) is a tasty blend of melted Pepper Jack and cheddar cheese. Dig in with the nachos served on the side, and find a hidden layer of black beans, jalapeños, pico de gallo, and more. The queso dip is the surprisingly milder contrast that adds balance to the rest of the more savory elements. You’ll be dipping and munching until the bowl’s clean. Don’t forget to capture that amazing cheese pull first, though. 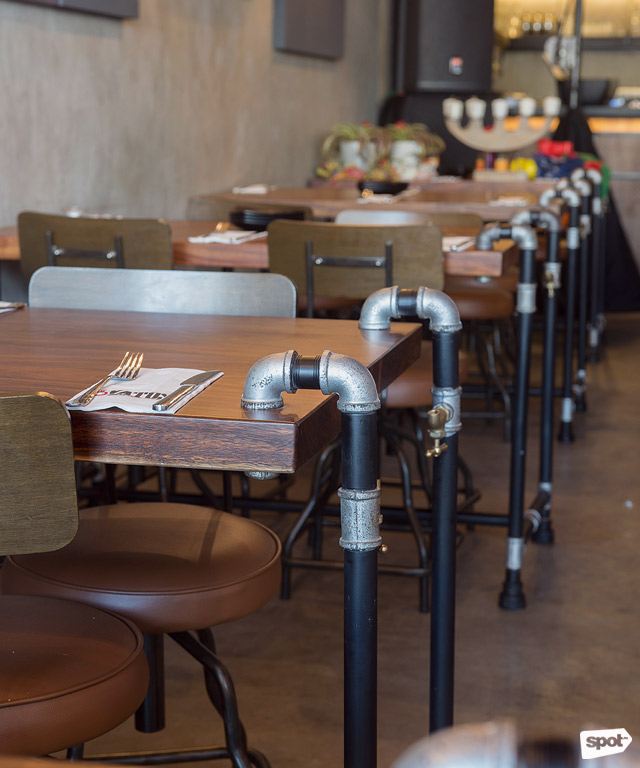 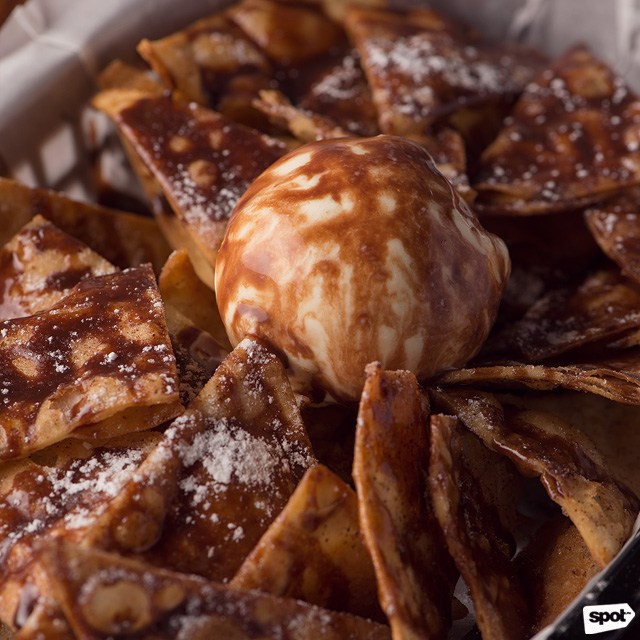 Don't leave without having the Nutella Nachos (P225), fried tortilla triangles dusted with cinnamon sugar and drizzled with Nutella sauce

With dishes that straddle the line between Korean and Mexican, resulting in a little of both but not exactly one over the other, Sid shares that they also did away with the usual elements you’d find in a Mexican resto like sombreros, banderitas, and a mustachioed mascot. “We made a conscious effort not to make [the place look] too Mexican-y or too Korean-y,” he says. Instead, they channel an industrial aesthetic, inspired by the first-ever Vatos in South Korea. “Our first building was actually falling apart before we started,” Sid shares. “We had another concept in mind, a modern-sleek design. But when we looked at the building, it was literally falling apart with broken bricks and holes in the wall. So you know, why even change it? Let’s take this, clean it up, and make it nicer.” The result is a rugged motif that they’ve kept throughout all the branches: Exposed pipes, bare concrete walls, and an accent wall with broken bricks.

Cool, moody, and dramatic: It’s a look you don’t expect when you enter a Mexican restaurant—but then you don’t quite know what to expect from a Korean-Mexican one. With Vatos’ playful menu that takes the best of both worlds to create new and imaginative dishes, this break from the norm is just the perfect fit.

Vatos Urban Tacos Net Park Bonifacio Global City Mexican Korean
Your Guide to Thriving in This Strange New World
Staying
In? What to watch, what to eat, and where to shop from home
OR
Heading
Out? What you need to know to stay safe when heading out