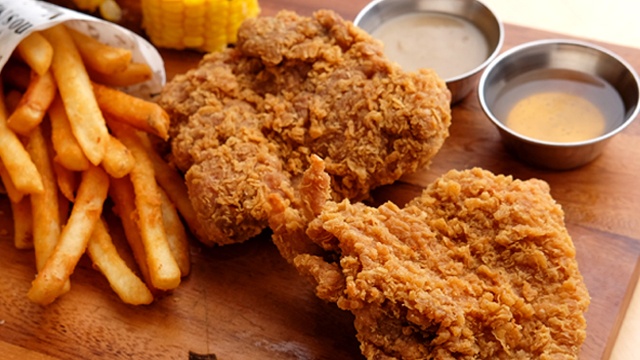 (SPOT.ph) Two words: Fried chicken. It doesn't take much to like this no-fail deep-fried treat—and in Metro Manila, it also doesn't require a lot of scouring to find one that's good. Give your all-time favorite fried-chicken places a break because we've found a lot of new ones to try. 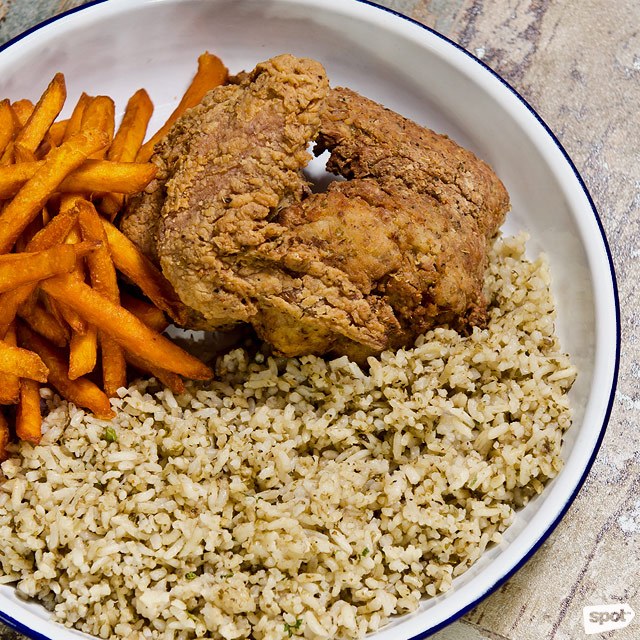 Who would’ve expected a Cuban restaurant to serve some really badass fried chicken? Cuba Libre is all sorts of wonderful—from their vibrant murals by Acidhouse to their aromatic South-American dishes served cantina-style. With their wide assortment of sides, you’ll have a hard time choosing which to have with your ultra-crispy Pollo Frito Cubano (P275). Each order gives you generous side dishes so you get a lot of bang for your buck. For first-timers, go for the Croquetas de Malanga, a croquette that bursts with flavor from cumin and other secret spices. The Arroz Blanco (white oregano rice) and Moros y Cristianos (rice with black beans) are also worth a try as they pair perfectly with almost any protein on the menu. 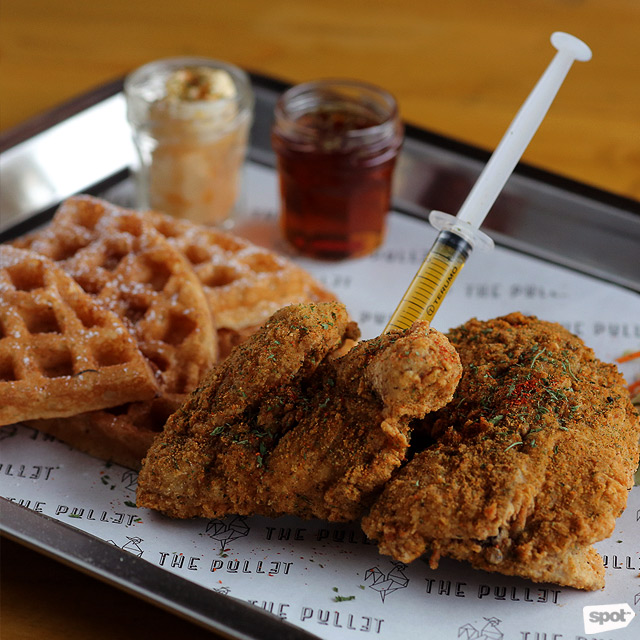 There’s a good reason why this little stall at Industrie Food Loft is still standing. Biting into their juicy fried chicken strangely feels nostalgic—it has a crispy breaded skin coated with a secret powder that will remind you of the cheesy chips you had in your childhood, and it’s strangely addicting. You can have two big pieces with either Corn on the Cob (P218) or with their buttery Waffles (P198). Either way, The Pullet’s fried chicken will have you dreaming about it for days. 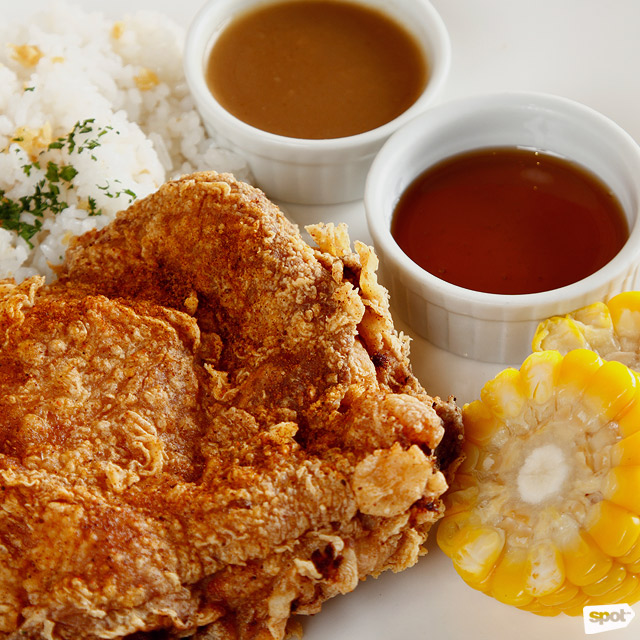 Formerly a gelato shop, Giulia by Casa Italia is an unexpected gem in the middle of a busy mall. Besides serving up classic Italian food and—of course—gelato, the restaurant also does a mean fried chicken. They call it Aunt Giulia’s Legendary Fried Chicken (P285/single, P495/sharing) and it sure lives up to its name. For every single serving, you’ll get one large piece that explodes with bold flavors from cayenne and paprika, not to mention various sides like mixed grains, earthy Russet potato fries, and spiced corn. The fried skin not only has a perfect golden color, but it also has the right amount of breading to get that crackling bite. 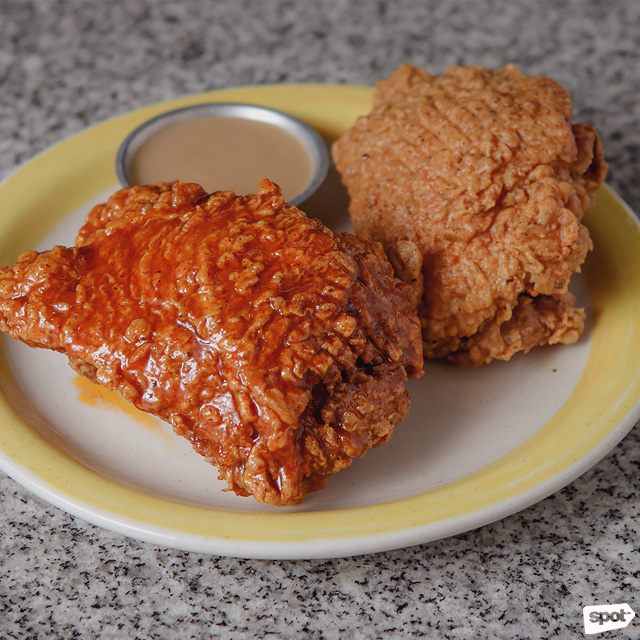 Another fried chicken heavyweight is Lucky Chick’s Original Fried Chicken (P110). Instead of buttermilk, Chef Francis Asuncion marinates the poultry with a fermented yeast starter from his own bread stash—this gives the fried chicken a bolder and more consistent flavor. The thick and crunchy breading can fill you up quickly, but nothing’s too heavy once you get a whiff of their starters, like the corn muffins, biscuits, and mac and cheese. You’ll be licking your plate clean in no time! The restaurant, which just opened a new branch at Ayala Malls The 30th, also recently introduced new fried-chicken flavors to their arsenal: Spicy Hot Chick, savory Sriracha Butter, and tangy Lemon. 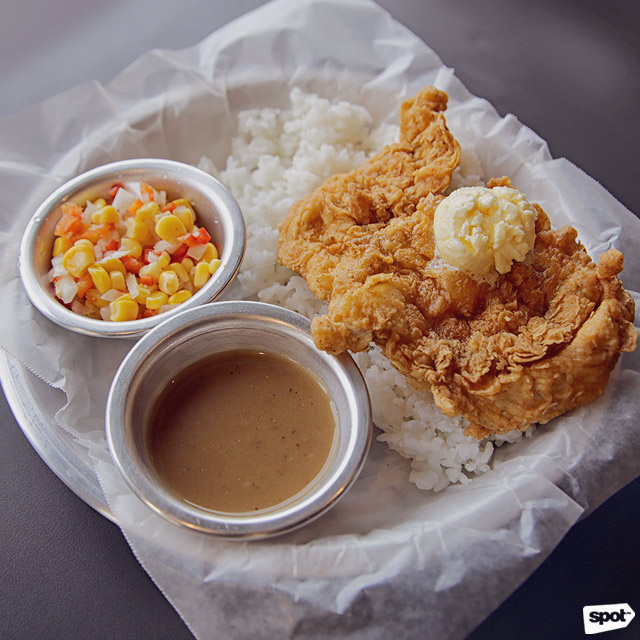 The new Malingap Central Food Hall, by the same guys behind Pino Restaurant and BRGR: The Burger Project, is a treasure trove of delicious eats. Take, for one, our latest fried-food discovery: HB Fried Chicken. What makes their signature Fried Chicken (P165/one piece) so unique is the freshly whipped honey butter served on top of each golden chicken fillet. Lying on a bed of fluffy white rice, the fried chicken is served with your choice of sides including corn salsa, coleslaw, and mac and cheese. If you want a punch of heat, you can also opt for their spicy honey butter. 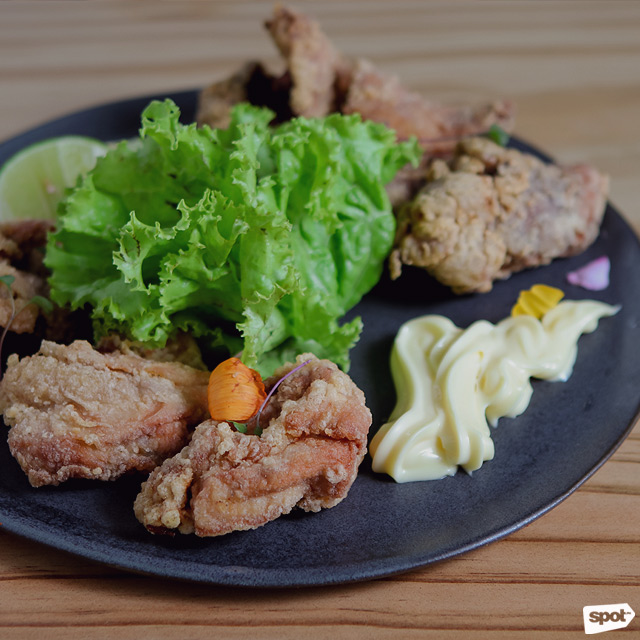 Apart from the restaurant’s roster of comfort meals with a twist, James & Daughters also offers some good ol’ fried chicken. But theirs is a spruced-up version because it's marinated with fish sauce for a more intense flavor. The Duo of Mom’s Fried Chicken and Tori Karaage (P475) is a sizeable plate of six fried-chicken pieces, served with some classic Japanese mayonnaise and fresh veggies. 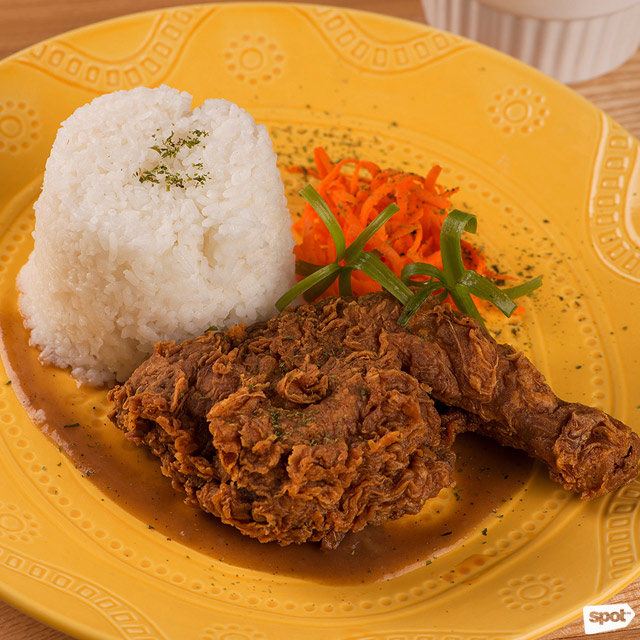 This underrated place along Tomas Morato offers different ways to enjoy chicken—have it stewed in coconut milk or roasted until it cooks in its natural juices, but perhaps nothing beats a classic fried chicken. Palm Grill’s Oswalda’s Fried (P229/quarter-piece, P339/half-piece, P649/whole) is an heirloom recipe and will remind you of Sunday meals at home. Coated in a beautiful golden breading, each piece tickles the taste buds with its deep flavor from a mixture of herbs and spices. It’s typically served swimming in gravy and with white rice, but you can also have it with Palm Grill’s potato salad for something creamier. 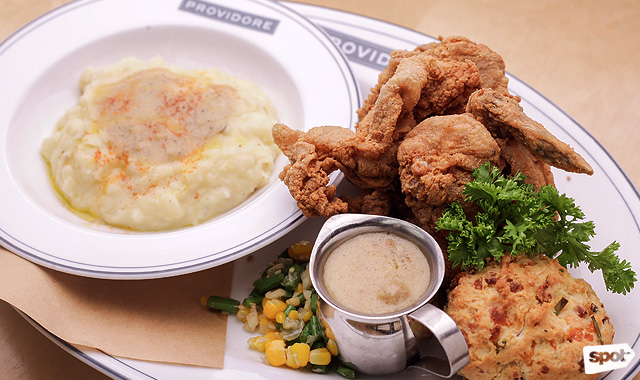 When it comes to soul-warming dishes, Providore doesn’t hold back. And what’s more comforting than a plate of golden-crisp fried chicken? Providore’s version is an ode to your mother’s deep-fried classic—only better (sorry, mom!). After all, it’s in the name: The Winner Winner Chicken Dinner (P320) hits the spot with its crunchy breading and winner sides, like the velvety mashed potato, sautéed buttered corn and French beans, a nice cheddar biscuit, not to mention a generous serving of their creamy and peppery gravy. 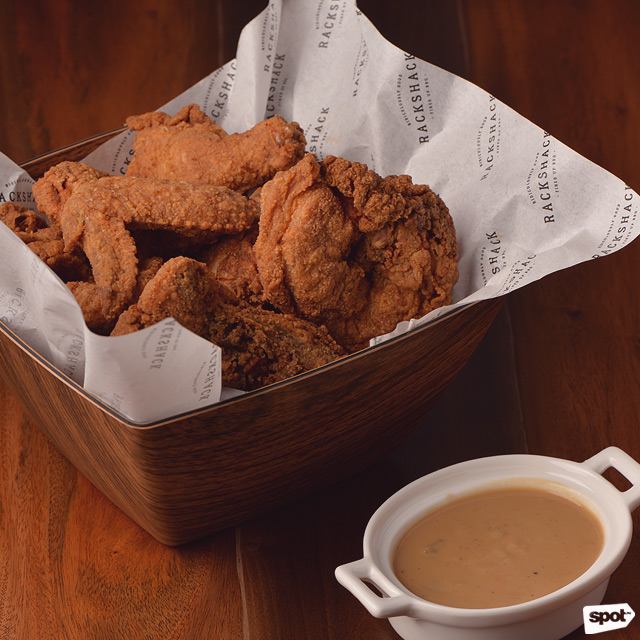 Count on Rackshack for your insatiable fried-food hankerings. Not only do they offer a sublime barbecue platter, but they also have super addicting crispy chicken called Crack Fried Chicken (P195/two pieces, P345/half, P615/whole). Served with steaming hot rice and a big bowl of gravy, Rackshack’s classic breaded chicken won’t disappoint the fried-chicken fan in you. 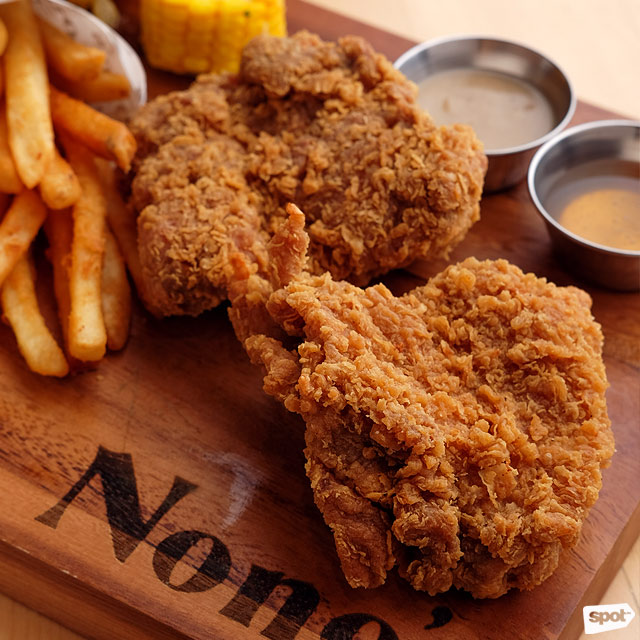 We’re calling it: Nono’s has some of the best fried chicken in the Metro. Their Homestyle Fried Chicken (P565) is sublime, stealing everyone’s hearts from the moment their huge, wooden platter chock-full of chicken and sides lands on the table. It has everything you want in a fried chicken—very crunchy breading and juicy and fork-tender meat. We love that it comes with thick-cut fries and sweet honey to match its herby gravy!

Nono's has branches at UP Town Center, Quezon City and The Podium, Mandaluyong City.

Fried Chicken
Your Guide to Thriving in This Strange New World
Staying
In? What to watch, what to eat, and where to shop from home
OR
Heading
Out? What you need to know to stay safe when heading out