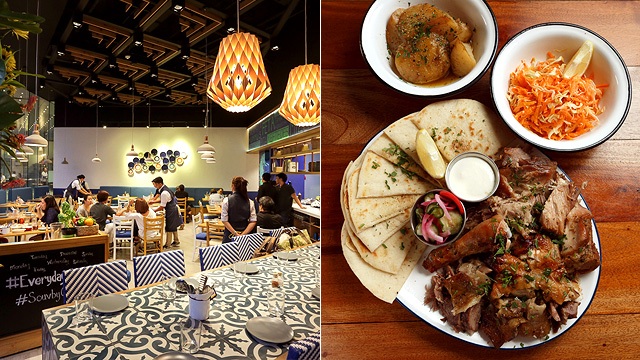 Go beyond gyros and kebabs.

(SPOT.ph) Fun fact: Mediterranean cuisine spans different countries and continents, all of which surround the Mediterranean Sea—and it’s not just all about Greek or Italian food, it also features cooking from Cyprus, Turkey, Jordan, Lebanon, and Syria. Yes, there’s more to Mediterranean food than just gyros and kebabs! The Metro has all these specialties if you’re willing to look. We’ve scoured all the best dining spots in Manila where you can indulge in this under-the-radar cuisine that has some of the best food in the world. Time to try something new!

You can’t help but say “opa” once you sample the specialties in Cyma, which has been around for over a decade now. Chef Robby Goco of the famed Greek chain actually traveled to Greece to bring the closest thing to authentic to the local palate. The Saganaki (P220) has always been a crowd pleaser because of the drama that the flaming cheese brings to the diners. There’s a bunch of meat and seafood dishes, but one of the bestsellers to date is the Roka Salata (P370/solo), a fresh salad that combines arugula, romaine, sun-dried tomatoes, candied walnuts, Parmigiano Regiano, and traditional Greek vinaigrette, which is surprisingly a hit with many Filipinos.

Their blue-and-white interiors will make you think of the colors in Santorini, but it’s Feta Mediterranean’s food that will transport your taste buds to the popular destination. If you’re a fan of lamb, go for the Shank (P560), which is slow-simmered with fresh herbs. It doesn’t have that gamey taste, and it’s made more filling with your choice of side—mashed potato, rice, or salad. The Lahmacun (P160) is also worth a try: the thin-crust pizza is topped with minced meat and veggies that are accentuated with herbs and spices, and then served with lettuce, onion, tomato, and lemon. It’s a fresh take on the typical pizza.

If the best-selling starter, Sultan’s Signature Hummus Dip (P125), would be any indication, then Sultan Mediterranean Grill’s cuisine won’t let you down. Aside from this tasty housemade chickpea blend, The Sultan’s Kebab Platter (P595) will satisfy your cravings for grilled meat. It’s a combination of your choice of four kebabs and koobideh, which are served with grilled tomato and a delicate shirazi salad.

With the claim that Kos Greek Ouzeri is the only restaurant in the Metro that uses authentic Greek lamb butter, you know you just have to order something that highlights this star ingredient. The Spanakopita (P145) is one such decadent dish, with a spinach and feta cheese phyllo pastry that’s brushed with the rare butter. They make everything from scratch at this restaurant; even their sourdough breads are made the traditional way. End your meal with coffee prepared in a briki (a steel pot with a long handle) and pair it with classic desserts such as baklava or Greek yogurt with honey. Pro tip: Get unlimited breads and pita with the dip sampler!

The Café Mediterranean has practically been an institution since it opened in the mid-'90s, back when most weren't yet too familiar with Mediterranean cuisine. Their extensive menu includes kebabs, couscous, gyros, and more, and it continues to evolve to this day. They’ve got a warm bowl of Lentil Soul (P320) that’s bursting with flavor, a Kofta Burger (P325) that has a mix of spicy grilled beef and lamb patty, and even Gyro Pizzas (P465/tuna, P435/chicken, P475/beef, P595/lamb), which are served with a dollop of tzatziki and homemade pickled chilies. There really is something for everyone here.

At this Greek-inspired restaurant, you’ll find Mediterranean touches just by looking at the décor that features eye-catching, colorful hanging lamps. Greeka Kouzina’s menu is just as vibrant, from the fresh salads to the meat dishes that are all good for sharing. A popular option is the Krasates (P595), a hearty plate of two grilled pork chops, made tastier with a blue-cheese walnut spread and their signature gravy. But what the restaurant really prides itself in is the Arni Lemonato (P695), a five-hour roast lamb served with gravy and a tangy lemon-mint sauce. Just one bite and you’ll know why it’s one of their bestsellers!

This hole-in-the-wall in Makati is a hidden gem, and a favorite of foodies who are adventurous enough to try anything new. Take your pick from any of the restaurant’s namesake dishes, or simply go for the classic and flavorful Hummus Elijah (P250), which features their signature hummus with tahini, topped with chickpeas, olive oil, herbs, spices, and two warm pita breads. The other versions are also worth trying, with mushrooms, fava beans, pine nuts, or lentils. Also worth the drive (and traffic!) is the Falafel Sandwich (P180), another vegetarian-friendly dish that has deep-fried mashed chickpeas wrapped in pita bread, and served with fresh salad.

Perhaps what sets Tapenade apart from other Mediterranean restaurants in the Metro is The Salad Room (P620), which is literally a buffet room filled with not just your average greens, but also indulgent seafood (hello, oysters and salmon gravlax!), curated cheeses and cold cuts, as well as freshly baked breads and dips. But if you prefer something lighter and à la carte, you can have the Stone-Baked Feta Cheese (P460), which is cooked daily in their brick oven and served piping hot. They’ve also got Moroccan tagines and kebabs if you’re up for some unique new flavors and spices.

It’s not every day you come across a contemporary Israeli café and restaurant in the Metro, so when you do, you just have to let your palate go on a food adventure. Try the tomato-based egg dish called Shakshouka (P445) if you want something to warm your belly; the Black Olive, Eggplant and Feta (P445) if you want something light, or the Meatball (P435) version if you’re looking for something savory that will fill you up. The menu also has Western options like burgers and pizza, but stick to the Mediterranean specialties like shawarma and kebab for the real deal!

SOUV by Cyma is a modern Greek restaurant from the same group that brought you Cyma and Green Pastures. If you’re a Greek-food newbie, start with some of their homemade dips and pitas (the Greek nachos are yum-o!), but make sure you have room for their exciting entrées like the Angus Beef Short Rib (P1,250), which is braised and grilled to achieve that oh-so tender texture. Add some gremolata and a squeeze of lemon, then savor every bite. Another must-order is the Yiouvetsi, or Greek-style paella that you can either get with Lamb (P850) or Seafood (P850) depending on your preference. It’s a feast for the eyes—and the palate!

Kos Greek Ouzeri Feta Mediterranean Hummus Elijah Souv Tapenade Mediterranean Food Chaplin Greeka Kouzina Guide Greek Food Sultan Cafe Mediterranean Cyma
Your Guide to Thriving in This Strange New World
Staying
In? What to watch, what to eat, and where to shop from home
OR
Heading
Out? What you need to know to stay safe when heading out