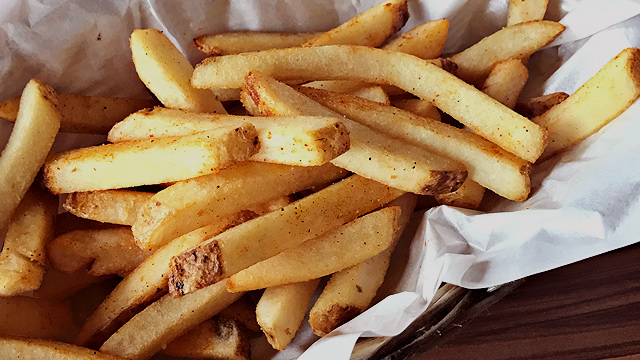 Did You Know That "French" Fries Aren't Really French?

Here's the story behind your favorite fast-food snack.

It's the lament of the Belgians: Fries are actually a Belgian culinary invention and yet, it's called French fries. Belgium and its citizens adore their frites so much that it's considered one of Belgium's most beloved national dishes, and they even have a museum in its honor. A trip to a frietkot, or fry shop, is always considered a treat, and the fries are treated as the main meal instead of merely a side dish.

It's this love for these fried potatoes which prompted Belgium's potato industry to launch a campaign to change the mindset of the world regarding the popular frites and take back ownership of its beloved snack.

However, you may be wondering: If these beloved fried potatoes aren't from France, why are they called "French fries"? The world first came upon these fried potato sticks as French fries during World War I, according to research done by Romain Cools of Belgapom, the recognized association for the Belgian potato trade and processing industry. He claims that one point of confusion could be the way the potatoes were cut. It was originally called French fried potatoes, and potatoes were cut and fried in the French way. France, after all, is the culinary center of the world.

Another story that could have led to the confusion, Cools said, is how during that same war, soldiers discovered the fried potato snack and loved it so much, it was brought back to America. But the people who introduced the snack to the soldiers spoke French—Belgium was French territory at the time, and even now Belgium has three official languages: French, German, and Dutch.

While all this confusion is understandable, the Belgian government seeks to promote Belgian fries or frites as one of Belgium's Uniquely Phenomenal "99 Reasons." These fries are considered different from the usual fries we are more familiar with since there is a specific way of cooking the fries.

Here are three reasons why Belgian fries are different from what you're normally used to eating:

It's cooked in beef lard.

This gives the Belgian frites its unique flavor. Oil just can't impart the same flavor into the potatoes and is basically an ingredient in its preparation.

The first fry is at a low temperature, which is meant to cook the potatoes until tender, and then the second fry is at a higher temperature to induce the crispness of the outside while maintaining the soft and tender texture of the potato on the inside.

Belgian fries are thicker than the usual shoestring variety. The matchstick thickness of shoestring fries can't give the Belgian fry its signature interior. It's because each stick is thicker that, when fried twice, the potatoes don't dry out.

This story originally appeared on Yummy.ph. Minor edits have been made by the Spot.ph editors.