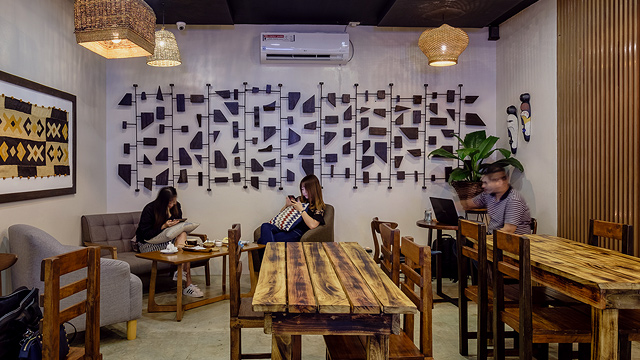 This Library Is Home to Vietnamese Food, Coffee, and More

(SPOT.ph) Most coffee shops in the metro more or less serve the same cup of joe. After all, you can never go wrong with the usual cappuccino and latte. The Coffee Library, which first opened in Baguio City, went against the norm by highlighting rather unorthodox concoctions—coffee with yogurt, coconut milk, and even egg—that piqued the interest of locals and tourists alike. The Coffee Library also became the first café in the City of Pines to serve authentic Vietnamese coffee and cuisine, and this earned them a loyal following.

The success took owner Stephen Zarate by surprise. Zarate, who first fell in love with Vietnamese cuisine on a family trip to Vietnam in 2013, is based in Baguio, so it made sense to open the first branch there in December 2015. The warm reception prompted him and his partners, Erwin Escalante and family, to further expand their brand, so in April 2016, they opened their second store in San Juan, La Union, followed by another branch, this time in Rosario, two years after. This July, The Coffee Library has found its way to Metro Manila, which he thinks is their "game-changer."

“Ang vision kasi ng [The] Coffee Library is to be known as one of the top coffee shops in the country.” Expanding to Metro Manila, he adds, is one way to achieve that goal.

This aggressive expansion meant that The Coffee Library also had to shake things up in terms of its offerings. Its menu, which originally consisted of mostly Vietnamese fare plus some pasta dishes and sandwiches, has grown to include rice meals and burgers. Developing these new additions is Zarate’s brother Kenneth, a chef.

While crowd favorites vary among the four branches, there are standout dishes on this branch's menu. The Crispy Pork Kare-Kare (P210), for instance, is a sight to behold—a chunky slab of pork deep-fried to perfection, sitting atop a bed of vegetables, with a serving of bagoong and plain rice. There’s also Baby Back Ribs (P280), which is slow-cooked and served with a refreshing strawberry-apple-mango salad.

If you’re not a fan of rice meals, there are the Vietnamese dishes for you to try. There's the Pho Bo (P195), a hearty noodle soup with tender slices of beef, topped with spring onions, cilantro, and bean sprouts. It’s best paired with Nem (P195), or fried spring rolls made of ground pork, shrimp, wood ear mushroom, and glass noodles served with Vietnamese-style dipping sauce.

Taking center stage is the café's growing selection of coffee. Aside from the usual Italian brew like latte and cappuccino, The Coffee Library serves authentic Vietnamese coffee prepared with a phin, a metal filter that brews coffee via drip method. “I think ’yon 'yong nag-hit sa amin, kasi we’re not the typical coffee shop that serves latte. [Our Vietnamese coffee piqued] the curiosity of the people,” shares Zarate.

Vietnamese coffee comes in unconventional flavors. Ca Phe Bak Xiu (P120) is coffee infused with coconut milk, and is a good choice if you’re looking for something sweet to balance out a flavorful meal. If you’re feeling adventurous, go for their Ca Phe Sua Chua (P120), or coffee with yogurt—a bitter-sour combination that may take some getting used to. Another coffee concoction worth trying is Egg Coffee (P130), which is similar to a warm cup of eggnog.

There’s also Turkish Coffee (P130), which is made of finely ground Arabica beans sourced from Turkey. The brew is spiked with spices like cinnamon and cardamom, and is prepared using a cezve, or a small Turkish metal pot similar to a dripper. Because the flavor can get quite overwhelming, Turkish coffee is usually served with a glass of water to cleanse the palate.

But that’s not to say this café is just all about coffee from distant lands; it also proudly serves local, like Kapangan beans sourced from Benguet. The dark-roasted Robusta beans, says Zarate, is somewhat similar to barako.

Zarate is proud of their coffee selection, as each variety is of single origin and is served according to how it is actually prepared in the place it originated from. After all, that’s exactly the reason behind the name: The Coffee Library aims to bring different varieties of coffee, and educate customers about the many aspects of coffee drinking—from how coffee varies in tastes to the different brewing methods used to extract the beans' flavors.

The Coffee Library also boasts tastefully done interiors. The bare-cement walls are spruced up with wooden accents and tapestries from different countries (thanks to Zarate’s aunt who brings them home from her travels abroad). This branch in Pasay City has ample seating and cozy nooks for anyone who wants to linger, while the many electric outlets are a plus for those who need to work on their laptops.

Having four branches in just a span of five years is quite a feat, but Zarate makes sure they don’t rest on their laurels. He's gone to Cambodia and Laos recently, studying how he can bring their coffee to the local scene. In the years to come, he hopes that they can still live up to their vision, and to expand to other regions. And with a growing fanbase, The Coffee Library seems to be on the right track to doing just that.

The Coffee Library Coffee Shop Pasay Vietnamese Cafe
Your Guide to Thriving in This Strange New World
Staying
In? What to watch, what to eat, and where to shop from home
OR
Heading
Out? What you need to know to stay safe when heading out