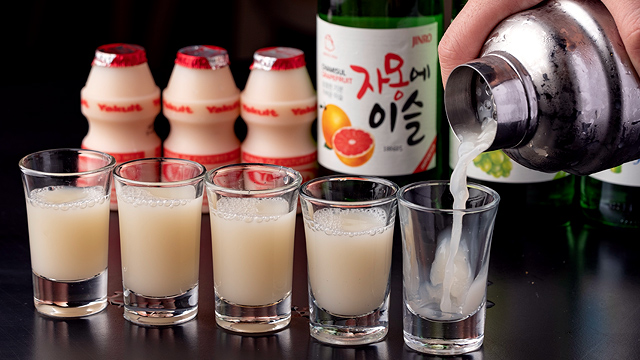 This Secret Soju Bar in Poblacion Is Worth the Search

They give free soju-Yakult shots when the clock strikes midnight.

(SPOT.ph) Yakult may not actually be a “Korean yogurt smoothie” like they call it on Netflix’s To All the Boys I’ve Loved Before (it’s actually Japanese!) but that doesn’t mean the tiny drink isn’t huge in South Korea. In fact, pairing Yakult and soju is probably as Korean as kimchi and samgyupsal.

The Odd Seoul highlights this combo in their fun cocktail menu. They’re hidden inside Korean restaurant Gaja and the contrast couldn't be starker—if Gaja is bright and Zen-like, The Odd Seoul is hip and a bit edgier, with neon lights and remixed versions of Gaja’s accent art pieces. What’s sure to draw your attention, though, is the neon-lit map of Seoul’s train system.

“If Gaja is traditional Korea, The Odd Seoul is the Gangnam side of Korea,” says owner Terence Lim. “It’s the Hollywood of Korea, and we wanted to channel that fun vibe.”

South Korea isn’t just known for Yakult and soju—they’re starting to get a reputation for some pretty wild parties, too.  Lim shares that they partied in South Korea before opening The Odd Seoul: “Every time we open a bar, we make sure to party hard first.” With three successful bars—RM 16, Thirsty Barber, and Churchill—under his belt, it looks like their “research” produces winning results.

Partying in Gangnam didn’t just open the team’s eyes to the district’s lively night culture—it also exposed their taste buds to Korea’s offbeat yet tasty street food, which they highlighted in The Odd Seoul’s bar chow.

The Odd Seoul Gaja Poblacion Korean Makati City
Your Guide to Thriving in This Strange New World
Staying
In? What to watch, what to eat, and where to shop from home
OR
Heading
Out? What you need to know to stay safe when heading out