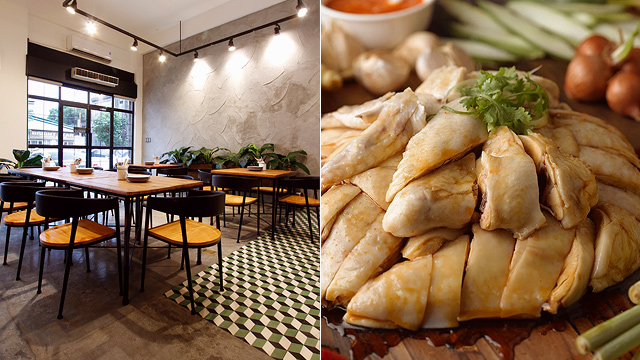 Craving some Hainanese chicken rice? Here's where to go in the Metro.

(SPOT.ph) Even though it’s one of the smallest countries in Asia, Singapore is known for being a melting pot of different cultures—especially when it comes to food. The city is home to millions of immigrants, resulting in a cuisine that’s a unique blend of Indian, Malay, Chinese, and Western cooking. A trip to the Lion City isn’t always possible, but there are a lot of places in Manila where you can grab a bite of classic Singaporean fare.

Here are 10 restaurants in Metro Manila for great Singaporean food:

This kopi tiam or coffee house is a great place for traditional Singaporean breakfast food like Kaya Toast, or bread slathered with creamy butter and sweet kaya jam, and Hot Kopi, a coffee blend of Robusta, Arabica, and Liberica beans. Nanyang not only offers dishes like the classic Hainanese Chicken Rice (P268), but also more modern items like the Cheesy Chicken Chop Noodle (P238), a breaded chicken fillet fried until golden, topped with cheese, and served alongside silky noodles. Plus, they import almost all of their ingredients from Singapore, so what you're getting is as close as it gets.

Roti may be better known as a side dish, but this hawker center-inspired joint elevates the classic flatbread to a whole other level. Their roti is flaky, buttery, and always served warm. Roti shop offers different kinds of dips to go with your roti but you can’t go wrong with their Roti Prata Special with Chicken Curry (P195), as the spiciness of the curry perfectly goes well with the roti’s buttery texture. Hoping for something more filling? Try out the Murtabak, a wrap stuffed with different kinds of fillings. Think of it as a Singaporean take on the Mexican quesadilla.

For many, Kopi Roti is their first introduction to Singaporean food. This chain of restaurants first opened in 2005, introducing traditional kaya toast and buttery-soft kopi buns to Filipinos. Even though they’re more known for their breakfast dishes, selected branches have since expanded their menu to include Hainanese Chicken Rice (P250 to P800), Laksa (P270), and Curry Stir Fry Noodles (P180).

This cozy spot in Quezon City will make you feel like you’ve been transported to the streets of Singapore, with painted murals that feature scenes from the Lion City. Their menu is full of Singaporean favorites like Beef Rendang, Pineapple Fried Rice and of course, the ever-popular Laksa. Finish off your meal with some Penang Chendol, a shaved ice dessert topped with green jelly, sweetened kidney beans, and coconut milk.

Shiok Shiok is at 81-A Nicanor Roxas Street, Quezon City.

Also Read:
The Best Laksa and Laksa Kits You Can Order in Manila

Finding wallet-friendly places in Makati isn’t an easy feat. So when you’re craving Singaporean dishes while on a tight budget, consider heading to 101 Hawker Food House in Legazpi Village. This hole-in-the-wall serves Singaporean staples like Hainanese Chicken Rice (P130/topping, P195/two to three people), Char Kway Teow (P130/topping, P195/two to three people), and Laksa (P140) at affordable prices. The restaurant is also owned by a chef who was trained in Singapore so you know you’re getting meals that are as close to authentic as it gets.

Wee Nam Kee is perhaps known to many as one of the best places to get Hainanese Chicken (P455 to P1,688). Not only do they have it in the classic steamed, and roasted varieties, they also serve up a version made with yellow chicken, which is considered to be the Kobe beef of poultry. Each bite is juicy and rich, without being too overpowering.

Since opening its doors in 2016, Merlion’s Cuisine has become a favorite for those living in the South. Their set-up will quickly remind you of Singapore’s famous hawker centers, as they have an open kitchen where you can see your dishes being prepared right before your eyes. If you’re having trouble deciding what to order, consider getting a platter. It features all of the classics like Hainanese Chicken (P548/half, P888/whole), Roast Pork (P298), and Honey Glazed Pork Ribs (P298).

If you’re looking to try something different from traditional Singaporean fare, consider heading to Balestier. This hip restaurant in Marikina takes a fusion approach when it comes to Singaporean food, combining it with other cuisines like Italian and Japanese. Their Bak Kut Teh Risotto (P305), for example, combines the traditional herbal soup with rich, creamy risotto. Their Laksa Tsukemen (P435), meanwhile, separates the noodles from the broth, allowing you to enjoy the two components of this classic Singaporean staple separately.

With Singaporean cuisine taking cues from Chinese cooking, it shouldn’t come as a surprise that Bugis Singapore Street Food has made a name for itself in Banawe, a neighborhood that’s dominated by Cantonese restaurants. Many make the trip for their Laksa (P250), which is not only rich and creamy but also comes with free refills of the spicy broth.

This restaurant in Marikina serves up homey Singaporean food in the form of noodles. The dishes here are simple, using fresh ingredients that are made even more flavorful with spices and herbs. One dish that stands out is the Beef Rendang (P499), with tender beef chunks stewed in coconut milk and lemongrass.