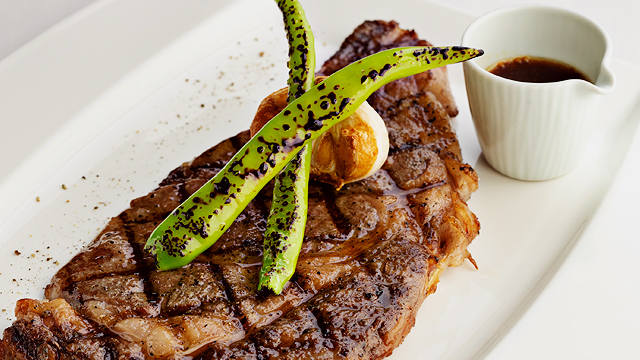 This Steakhouse Is Shaking Up Its Classic Menu With Japanese Flavors

Tired of the same old protein-and-carbs combo? Ruby Jack's has your answer.

(SPOT.ph) What comes to mind when somebody says "steakhouse?" Is it images of huge slabs of tender beef, hefty portions of carb-loaded sides, and dainty sakura blossoms encased in a sweet raindrop cake? If that last bit confused you, then allow Ruby Jack’s Steakhouse and Bar to explain. The City of Dreams staple recently introduced new dishes that you won’t experience anywhere else: a fusion of classic steakhouse dishes and Japanese cuisine—making for a revamped menu that changes the game for your typical steak dinner.

It isn’t a wonder Ruby Jack's decided to go Japanese: Their original branch is housed in Tokyo, and the second branch in Manila stays true to their brand of high-level quality. But with a new chef leading the Manila branch, they're taking their own direction. "When you go to any steakhouse, it's more of a Western approach,” says their Head Chef Edwin Sta. Ana. “The goal here is I tried to use as much Japanese products, as well as Filipino—local—to have a steakhouse that has Japanese influence,” he adds.

The chef—together with the Ruby Jack’s team—spent over a month finalizing and perfecting every detail of their new menu which was launched in June. Born in the Philippines and raised in South Africa, Sta. Ana is no stranger to different types of cuisine, especially Japanese. He was also part of the team that opened Nobu Hotel in 2015.

A good example of that sweet spot between Japanese and Western is the Teppan Grilled Foie Gras (P780), which features a decadent slice of foie gras atop braised daikon. Sta. Ana explains that the Japanese radish, paired with fatty fish, is usually eaten during winter in Japan—a taste that inspired this dish. "Foie gras is very rich and then [with] the balsamic and the teriyaki combined, you know, [it] cuts that richness. There's a fine balance," he says.

For something that's a bit more on the adventurous side, try the Premium Beef Tenderloin Tataki (P850). Premium-grade tenderloin is seared and sliced thinly to reveal a perfectly pink interior, then garnished with wasabi, onion relish, and ponzu jelly for that citrus hit. Think sashimi, but beef (and better, we’d argue!).

The classic shrimp cocktail also gets an upgrade with the Grilled Shrimp Salad (P550). Grilled shrimps are tossed in lettuce and covered in a zesty calamansi dressing, balanced out with the earthy hit of truffle and Parmesan. It's made even better with a dash of shio kombu, or marinated bits of dried kelp made in-house.

It wouldn’t be Ruby Jack’s without steak, of course. A brand-new offering on their impressive list is the Premium A3 Saga Wagyu Rib Eye (P6,300/300 grams). One bite of the tender and perfectly cooked steak is all it takes to understand why the restaurant places such importance on the quality of their beef. Their supply is brought in from either Japan, Australia, or the U.S. and is never frozen. “It's all air-aged or dry-aged and usually all chilled meat because [freezing] does affect the quality of the steak,” explains Operations Manager Thiago Harada.

The feast doesn’t stop at steak though, as Ruby Jack’s dessert options hold their own against the steak list. The Double Baked Cheesecake (P400) is a classic that has never left the menu—and for good reason. The recipe uses just five ingredients but all are top-quality. It is first cooked in a bain-marie, then baked and set aside. The slice is baked one more time right before it is served: It comes with passion fruit curd and a scoop of specially made rosemary ice cream. This dish is also a signature of the original Tokyo branch, but as Harada cheekily claims, the Manila one tastes even better thanks to the locally sourced ingredients they use.

Another special dessert that uses Pinoy ingredients is the Pandan Pavlova (P400), which features the classic flavors of buko ice cream, kaya jam, pandan jelly, and other yummy tidbits in a light meringue base. This cool reinvention is a definite must-try for buko-pandan lovers.

Turns out sakura flowers aren’t just pretty: they’re pretty damn tasty, too, as the Sakura Teardrop Cake (P400) proves. Delicate blossoms in transparent jelly lie on a matcha pancake, and are served with chocolate ganache and vanilla ice cream, also made in-house. The mix of sweet sakura and earthy matcha, rounded out with classic vanilla, makes for an unbeatable experience.

You can also head to the bar for a cocktail or two, where they’re serving new creations as well. Some of their drinks feature fruits from the Philippines and abroad—you know, in case you were looking for a new, albeit questionable, way to sneak some nutrition into your diet. Start with an Umetini (P450) which takes the sweet flavors of umeshu, a Japanese plum liqueur, and mixes it with gin for a new play on the martini.

For local flavors, the Longan Martini (P320) gives the lychee lookalike an unexpected makeover as a fruity cocktail with just the right notes of bitterness. Still thirsty? Then the Jackfruit Mojito (P320) is worth the last shreds of sobriety. With Don Papa Rum as its base, the jackfruit makes this mojito a refreshing but still pretty solid drink. Disclaimer: make sure to know your limits!

Even with this new array of dishes though, Ruby Jack’s is still very much in tune with its steakhouse soul. "We wanted to make the menu a bit more delicate," explains Harada. "Of course, you can have a very filling dinner [at Ruby Jack’s], but if you want to have a nice, elegant dinner, we can also do this for you," he adds.

Ruby Jack’s is not a Japanese restaurant—but it’s not just any old steakhouse either. The new dishes added to the classic menu brings a different flavor to the typically western experience, and makes dining at Ruby Jack’s unique: familiar, but still out of the ordinary. So if you’re looking for a little something beyond the usual steak and mashed potatoes, Ruby Jack’s is the way to go.