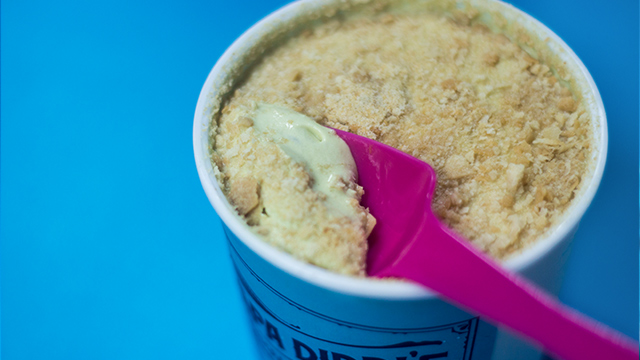 Avocado Gets a Crunchy Twist in This New Ice Cream Flavor

Yes, avocados are thankfully in season, despite the unpredictability of the weather. It would be a shame to not take advantage of this fruit right now. If you like avocado in all forms, then you'll love Papa Diddi's handcrafted ice cream of the month. This July, Papa Diddi's monthly ice cream subscription features the Avocado Loco.

As if the rich, creamy avocado wasn't enough, the Avocado Loco is made with bits of Jacobina cookies crushed on top. The cookies add a bit of crunch and texture in contrast to the creamy and silky avocado ice cream.

Jacobina is a heritage bakery from Tagaytay, popular for their classic take on the Pinoy biscuit. The biscuit is unmistakable with its square shape full of crisp and flaky layers. Fun fact: the Jacobina biscuit began way back in 1947 with Paterno Noceda. It was in his small bakery that the biscuit took real form, and now the Jacobina has got its own trademark—the biscuit has grown so popular that they export it to the U.S. and other Asian countries.

When asked why they decided to come up with a new avocado flavor, Paul Perez, owner of Papa Diddi's, had this to say: "I realized that not everyone is a fan of the avocado. As a matter of fact, some don't eat the fruit and can only take it in the form of shakes and ice cream." And with that extra crunch, it would be hard to resist this take on it.

Papa Diddi's Handcrafted Ice Cream Avocado Ice Cream Avocado Maginhawa Syndication Ice Cream Dessert Quezon City
Your Guide to Thriving in This Strange New World
Staying
In? What to watch, what to eat, and where to shop from home
OR
Heading
Out? What you need to know to stay safe when heading out