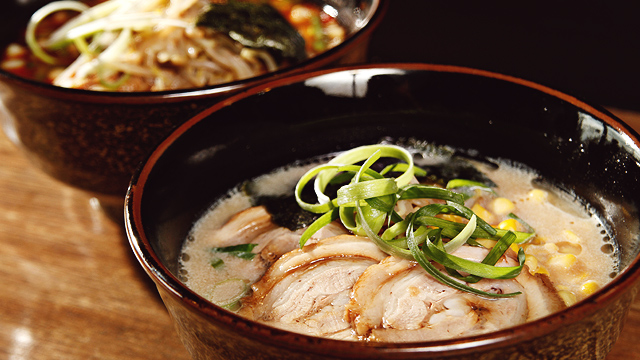 Go nuts all over again with the folks behind Crazy Katsu!

(SPOT.ph) It may seem odd to open a new venture in Marikina when your last successful business endeavor has four branches—you could open anywhere at that point—but that’s what you do when that’s where your chef lives. And, hey, this neck of the woods could always use more ramen.

Bryan Kong and chef Shinji Tanaka team up again for more things crazy (they’re the same folks behind Crazy Katsu), although there’s nothing too outrageous about Crazy Ramen—except maybe that everything on the tiny but terrific menu is crazy good.

The retail space is small, much like a traditional ramen joint in Japan might be. We’ve seen about a hundred iterations of the famous soup pop-up around the Metro, but at its core, it borders on street food because it’s so common.

But Crazy Ramen achieves its goal of doing the simple things really, really well. This is best exemplified in their Tonkotsu (P200/plain, P250/with Chashu), which is already a neighborhood favorite, and they’ve only been open since May. The broth is the perfect consistency—neither thick nor watery—sitting in a kind of universal middle ground where most people would love it. The noodles also ride on the line of just-done, giving bite and texture without putting up too much of a fight. The slices of chashu, while a tender treat throughout your meal, doesn’t play the part of a matinee idol—all the elements of this ramen are on par with one another, making a cohesive, altogether comforting dish.

The more adventurous among you will love the Spicy Tantanmen (P240), especially on rainy evenings. And no, it’s not just the Tonkotsu turned red—the spice has its own flavor, a sort of grassy bitterness that just cuts through the subtle richness of the broth. Then, if you have room (you’ll want to, there’s nothing bad at this place) you can follow it up with the cold Hiyashi Chuka (P200), a refreshing soba dish rife with well-seasoned egg and ham. It’s amazing on a warm afternoon on its own, too—it’s no second fiddle just because there’s no broth.

The Miso Butter (P220) is something of a revelation. There’s virtually no food that butter doesn’t belong in, from toast to tomato sauces to tonkotsu, apparently. But the slightly tangy-sweet of this broth’s fermented soy is both highlighted and softened by the addition of butter, and we’re ready to say that there are very few things in this world that could top this bowl besides its roommates on the menu.

No, really—the most difficult thing about this place is picking a favorite. Crazy Ramen’s appeal is best summed up in the simple Iced Coffee (P85) they serve: they’re approachable but authentic; decidedly un-fancy, but also undiluted. How they hit that near-perfect note may never be properly figured out, but we’re content to wonder as long as we can eat here.

Crazy Ramen Marikina Ramen Noodles Evergreen Lilac Street
Your Guide to Thriving in This Strange New World
Staying
In? What to watch, what to eat, and where to shop from home
OR
Heading
Out? What you need to know to stay safe when heading out