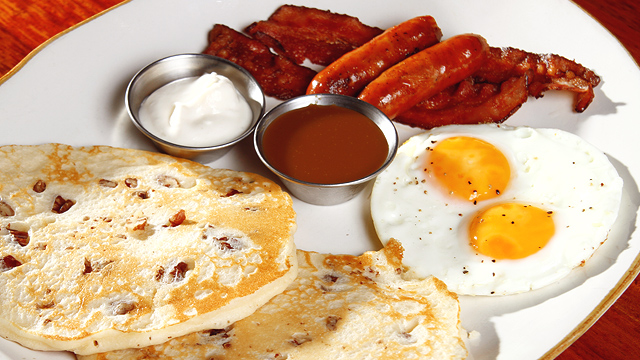 For the early birds!

(SPOT.ph) We know, we know: "Breakfast" isn't exactly the first thing that comes to mind when somebody says TGI Fridays. We can't blame you, though; the restaurant has established itself as the go-to place for hearty meals, good drinks, and a great time— but usually for lunch, dinner, afters, and even much-laters. A new menu might just inspire you to spend your entire day at TGI Fridays: the restaurant is now offering breakfast dishes at their branch in Bonifacio High Street from 7 a.m. to 10 a.m. daily.

The Fridays Breakfast Club was launched on July 29, and marks the first time the restaurant has offered breakfast since their entry to the Philippines in 1994—and you could say it's worth the wait. For now though, it's available only at their BGC branch, where it was made to cater to the early-bird crowd that calls the High Street area home.

Many of the restaurant's lunch regulars—from business people to call center agents and more—had been looking for a place to start their day, says branch general manager Josine Cajucom. TGI Fridays was only to happy to be able to offer them that place. The new breakfast menu was just a way to expand their resto's promise, adds brand manager Dana Cuadra. "It's still all about giving people good food and a good time," she shares.

As unexpected as breakfast at TGI Fridays may seem, their new fare is just as heartwarming and filling as their classic menu. If you're looking for to start the day with a fuel-filled dish then the Booster Bowl (P315) is exactly what you need. Bacon and granola are the best of friends in this dish, and the crunchy pairing is made even better with an egg, kale sautéed with garlic, and raisins. Served with just a drizzle of honey, the sweet and salty mix of this dish is a surefire way to get your boost.

For an unbeatable breakfast classic, try the Country Chicken and Waffles (P295). You might want to share this dish as servings are plentiful—even by TGI Fridays' standards—but we understand if you don't want to either. The waffles are crisp on the outside and tender on the inside, and their golden-fried chicken fillet strips go great with their tasty gravy.

Another huge dish that you may or may not want to share is their Breakfast of Champs (P305). Don't be surprised if a hefty plate filled with two pecan pancakes, two eggs, bacon, and Andouille sausages is dropped in front of you—take it as a challenge. The meaty fare is balanced out by the fluffy pancakes, while the pecan bits make it stand out from your ordinary breakfast dish.

If you can't get enough of the smoky-with-just-the-right-spice flavor of the sausages, then the Andouille Stuffed Omelette (P305) is your next dish. The hearty omelette is bursting with sausages, onions, and bell peppers for a spice-filled way to start your day.

They've got lighter fare on the menu, too. The Blueberry Vanilla Waffle (P275) is the way to go for those who prefer something sweet at daybreak. Crisp and tender waffles are smothered in a fluffy vanilla cream, and topped with blueberry jam. It also makes for a great dessert after all the savory dishes—we think you deserve it!

Their breakfast offerings are currently available at their standalone branch in Bonifacio High Street. The team is currently working on expanding it to other branches, says Cuadra—till then, we're keeping our fingers crossed!