Sam Stew Is a New Korean Restaurant at Ayala Malls Vertis North
Loading
Already a member? Log in
No account yet? Create Account
Spot.ph is your one-stop urban lifestyle guide to the best of Manila. 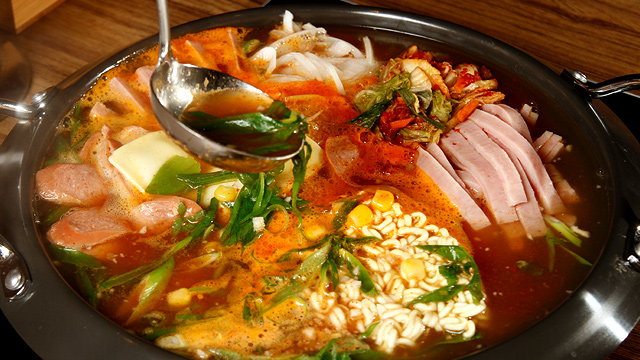 Korean Stew Takes the Spotlight at This New QC Restaurant

(SPOT.ph) It’s safe to say that Korean culture, especially Korean barbecue, has permeated the Filipino way of life. Any opening of a KBBQ restaurant is met with long lines, especially if they offer unlimited samgyupsal on the menu. But a new restaurant in Quezon City is hoping to shake up the trend by introducing Korean barbecue alongside another popular but sometimes overlooked Korean dish: stew.

Sam Stew, which takes its name from the two main dishes found in their menu, can best be described as a love letter to all things Korean. Owner George Pua of Meat Concepts—the same company behind restaurants like KPub BBQ and Rico’s Lechon, among others—decided to put up the new concept after eating his way through the Land of Morning Calm. “We wanted to be different from other [restaurants] in the metropolis,” Pua shares. “We created this because we felt like we wanted to get out of the trend, [which is] unlimited samgyupsal.”

From the get-go, Sam Stew makes it apparent that they take a lot of cues from Korean culture and history. This restaurant’s interiors take inspiration from the hanok, or the wooden Korean home of olden times. There’s even an area at the center of the restaurant that mimics traditional dining rooms, with its low tables and floor mattresses.

This commitment to sticking to tradition extends to how Sam Stew developed their menu. Pua says they sent their chefs to train in a Korean culinary school, so they can learn the proper techniques for making the restaurant’s dishes.

Pua also shares how he’s proud of the meat they use for their Korean barbecue. Sam Stew uses premium local pork, “which is cut fresh by a butcher daily.” The quality is clear once it hits the grill: The pork takes on a nice caramel color and the fat pretty much melts in your mouth immediately.

Sam Stew offers eight flavors of samgyupsal, which can be ordered as one set (P1,870), complete with unlimited banchan and rice. Sam Stew recommends a specific order of eating them so as to not overwhelm your palate: Start with Salt & Pepper then Wine, Ginseng, Herbs, Curry, Soybean Paste, Chili Paste, and, lastly, Garlic. There’s a lot of unique flavors here, but the wine- and curry-flavored pork stand out in particular because they can be eaten alone without dipping sauces.

Of course, also worth checking out is the restaurant’s menu of stews. These can be ordered alongside samgyupsal, for the full dining experience.

There’s the Budae Jigae (P1040/family size, P680/regular size), nicknamed “Army Stew.” The dish gets its name from its ingredients, which were originally surplus food from U.S. army bases in Korea. It can be described as "everything but the kitchen sink" stew, with ham, sausage, Spam, baked beans, ramen noodles, cheese, and kimchi. It’s spicy and hearty, perfect for those who want a bit of everything.

Another item on the menu that packs a lot of heat is the Konbul (P1,040) or bulgogi with bean sprouts, carrots, and sesame leaves, all cooked together in a spicy sauce. The crunchy vegetables help provide a nice textural contrast to the tender bits of beef.

If you’re looking for something a little less spicy, check out the Jjim Dak (P1,040), which Pua describes as a Korean take on the classic chicken adobo. Chunks of chicken are braised alongside ginger, carrots, potatoes, chili peppers, and glass noodles in a honey-soy broth. The result is a dish that’s a myriad of flavors: sweet, salty, savory, and spicy.

Sam Stew’s menu may not be as expansive as other restaurants, but they more than make up for it by offering dishes done well and with a lot of love. By shining the spotlight on traditional Korean stews alongside the ever-popular samgyupsal, this restaurant is out to prove that there is more to Korean cuisine than just grilled meat.

Sam Stew Ayala Malls Vertis North Quezon City Korean Korean Food Evergreen
Your Guide to Thriving in This Strange New World
Staying
In? What to watch, what to eat, and where to shop from home
OR
Heading
Out? What you need to know to stay safe when heading out