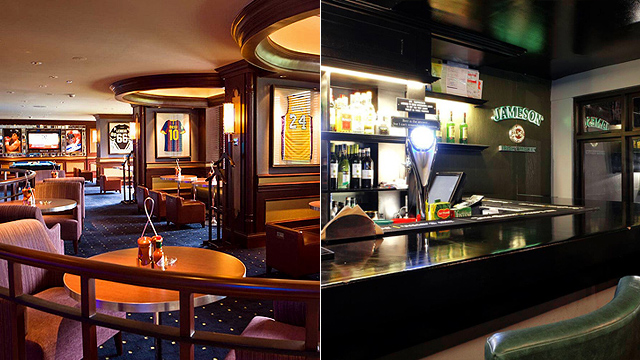 When you can't be there live, these spots will give you the same kind of thrill.

(SPOT.ph) The University Athletic Association of the Philippines' Season 82 Men’s Basketball Tournament is not devoid of riveting storylines. From Ateneo’s continued dominance under Coach Tab Baldwin, to the ushering of the Kobe era (Paras, that is) in the University of the Philippines, down to the Abando-nment issue mid-season for University of Santo Tomas, every game this year is a must-watch live. But, when you can’t be in the stands, you can still get that exciting vibe at sports bars. Who doesn’t want to watch a basketball game with their choice of bar chow and drinks?

Here are 10 sports bars to check out for your favorite UAAP team’s game:

Sports viewing is just as welcome here as is meetings (Rockwell folks do meetings at their Power Plant Mall branch, after all). That’s how versatile Draft Restaurant and Brewery is with their signature Euro-style bar feel. Local craft beer Compadre Draft is available on tap (starts at P100/300 ml). The pilsner variety is smooth and light while their wheat beer is more on the fruity side. You can pair it with Skewers (P190) that’s either chicken or pork with their signature barbecue sauce and pinakurat dip or Chicken Fingers (P240) for something both juicy and crispy complemented by a honey mustard and gochujang aioli.

See a list of Draft Restaurant and Brewery branches.

Bugsy’s has long served sports fans as much as it has the after-work crowd of Bonifacio Global City. Various TVs that are placed for easy viewing even when there’s a crowd. Adding more to the atmosphere is their choice of drinks: ice-cold local beers, various cocktails that include the Whiskey Sour (P185), and a wide selection of spirits. Should you find yourself hungry, their barchow is plenty for sharing like their Bugsy’s Sampler Platter (P425) which consist of nachos, buffalo tenders, and Margherita pizza, and their Chicken Skin Chicharon (P295).

Skinny Mike’s is pretty much “matic” if it’s a sports-viewing venue you’re after. Whatever live sport is there to watch, expect like-minded people to be there with you along with multiple screens around the bar to see the action unfold. Adding more to the vibe are the sports posters and decor around the place. Munch on their Boneless Buffalo Bites (P295) that feature crunchy chicken chunks with a tangy hot-sauce glaze and blue cheese dip to sandwiches like the Triple Play Sliders (P395) made of mini Angus beef patties topped with cheese, caramelized onions, and chili con carne, both of which are good for sharing.

If you’re looking for a hearty meal to go with Season 82’s cardiac games, then Brotzeit is your spot. Their Sausage Platter (P980) has spicy chicken, pork cheese, pork garlic, Weisswurst (veal), and Numberger (ground pork) sausages with a serving size that is good enough for two. The Honey Bavarian Ribs (P1,050) is a marriage of pork rib and a mix of garlic, beer, and barbecue sauce and served with potato wedges. You can then wash down with any of the German beers available on tap.

Known in Marikina as a cozy family restaurant with a picturesque garden area, Delicere easily transforms into a sports-viewing venue especially during Pacquiao fights. You can drop by with your friends and enjoy a drink from the bar with a wide selection of spirits and beers. They have Western-style entrees like Baked Salmon with Mornay Sauce (P370) served with rice, all-day breakfast omelettes or Pinoy-style silog, or shareable platters that go well with drinks like their Sausage and Cheese Platter (P720).

Located right at the heart of the food hub that is Quezon City’s Maginhawa Street, Break Shots Sports Bar has a chill, pool-hall vibe that comes alive during sporting events. It has has multiple TVs showing live sports along with two billiards tables that can easily turn game viewing into a longer hangout session. Perhaps owing to its proximity to UP, prices are rather budget friendly at this joint. Local beers start at just P60 a bottle and if you order buckets (P340 per bucket of six beers), your first one comes with free pulutan. They have steady rum, gin, vodka, and tequila-based cocktails too (starts at P120). Their selection of barchow is familiar—from mixed nuts (P68) to their version of sili and cheese spring roll, Dynamite (P138).

A British-themed pub that’s known to transform in the evenings for the party crowd also doubles as a sports bar. TV screens are spread around the Euro-style bar that offers seven different craft beers on tap, including Engkanto Lager (starts at P138), a crisp beer with citrus notes. While watching the game, match it with their Wonton Nachos (P410), a combination of wonton crisps, hoisin cream slaw, sriracha aioli, mozzarella, cheddar, and Thai pork—mixing sweet, sour, and spicy flavors with every bite.

This Irish-themed bar in Kapitolyo, Pasig, is a great spot for viewing UAAP games because their happy hour starts at 4 p.m.—usually the time of the second game of the day. Until 8 p.m., it’s buy-one, take-one for beers on tap (starts at P240 per pint) while local beers are priced at P49 down from the usual P85. Pair that with the cozy vibe of the place that’s dimly lit with hints of green lights and bar food like their Chicken Crackling (P240) that comes in original or salted-egg flavors and you’ve got yourself a winner—even if your team ends up losing.

Buffalo Wild Wings is that bar you can visit with family while you take a break from shopping. It's also where you can orient them on school pride through UAAP game viewing (which they hopefully imbibe). And since it’s a family-friendly spot with comfy couches, you can feast on the same grub together, starting with their signature Chicken Wings that come in traditional or boneless (starts at P345). You can choose from 12 flavors including Sweet BBQ, Carribean Jerk, and Asian Zing, to name a few.

With its location at Sofitel Manila, Snaps Sports Bar is a cozy bar fit for a special UAAP viewing date or for big games like the finals. Aside from the upscale ambience, this sports bar also offers dishes other than the usual beer grub. Try their Korean Beef Stew (P600), or choice beef cuts served with egg noodles and bokchoy, or their Linguina Vongole (P600), pasta with clams cooked in white wine. They have a good selection of wine and spirits, too.