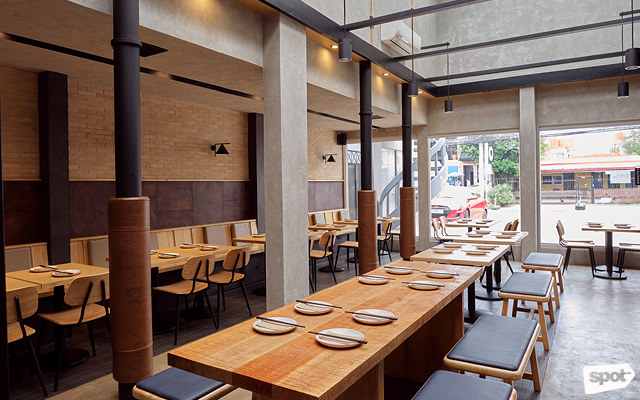 (SPOT.ph) It’s always a little risky closing shop and setting up all over again somewhere new, but then again, Sensei in BF Parañaque has never quite shied away from taking chances. The clue is in the name—a good teacher doesn’t let growth scare them or those willing to learn. Chef Bruce Ricketts and manager-secretary-wife, as Jae de Veyra Pickrell jokingly calls herself, are no strangers to the concept of "hit the ground running," so that’s what they tend to do.

Sensei’s new look was something of a whim they just rode with: “There was nothing here, and we asked—hypothetically lang naman—if we could have a skylight. They said yes and I thought, ‘Huh. I guess we’re really doing it.’ It wasn’t planned, exactly, but we’re happy it’s there,” says Pickrell.

The thing about this crowd favorite is that it couldn’t take in said crowds, until now. Their new space can seat 50, and that skylight makes for an airy, almost dreamlike, sort of atmosphere. Not the sort of atmosphere that hangs delicately by a thread, requiring so much of its diners—it’s the effortless kind that quiets you, slowly narrowing your focus to the experience you’re about to relish.

The Tuna Tataki Salad (P370) is a great example of an excellent starter—the flavors are layered and so well-balanced. The only caveat is the word “salad,” because this isn’t exactly super healthy, but hey! You’re here for a good time, aren’t you?

The Ika & Uni Gunkan (P210) is, in Ricketts’ own words, “one kind of maki that isn’t normally served in Manila,” but we’re willing to bet that’s about to change. Squid (the ika part) has never been this smooth; it’s only slightly firmer than the sea urchin (uni), and while they make for a cohesive mouthful, you can still distinguish one ingredient from the other. It’s improved by the soy sauce provided, sure, but you can skip it if you really want to savor that fresh-from-the-ocean taste.

If you want more layers to your maki, though, the Cali Roll with Ebi (P290) is your guy. Fair warning: You might never go back to how you used to eat kani. The green goddess aioli is a refreshing touch of genius, and this vibrant (though massive) bite kicks all other California rolls to the curb. We don’t make the rules here. (Pickrell does, though.) For something even more fresh—and, to be honest, more Japanese, in spite of the name—the Tijuana (P390) is a plate of sushi you won’t soon forget. The combination of snapper and tuna, plus mango, cilantro, and pickled green chili comprise a light bite with substantial chew, and a real kick to boot.

But let’s say that you’re looking for a real adventure of a roll; you’ll find it in the Tuna & Crispy Scallop Dynamite (P330), which only looks intimidating. In reality, it’s insanely easy to eat—you’d be able to polish off a whole plate, no problem. The subtle contrast in texture makes it fascinating to feast on, if there was ever such a thing, and the unobtrusive spiciness makes it pretty much perfect. And at that price point? It’s nigh unbeatable.

Heft clearly isn’t a problem for Sensei’s maki, but they take it further still with the Ebi Tempura (P680), which is just another thing some people have to “learn” to eat—not that it’s a chore—because they fry that prawn up whole, head and all. And, sure, they’ll serve it with the dashi dipping sauce we’re all familiar with, but there’s also a black sesame salt on the side that you don’t want to miss out on. We’d even say that using it does more for the tempura, and you might not even look for the sauce anymore.

But if you’re looking for something that goes almost too well with the chahan, the Saba (P420) is the horse to bet on. Grilled mackerel doesn’t sound exciting on its own, but this fish is so tender it almost doesn’t flake, plus the bell peppers add an umami-sweetness that you don’t normally look for with fish. But you will now.

The Gyu Rosu Don (P520) is unlike any gyudon you’ve ever had, and we’re not pulling your leg here. The sauce makes the meat glossy and look almost raw, but that’s only a trick of the light; the egg yolk that you break over the whole dish adds a richness to it, but this isn’t where the party ends. The rice itself is brimming with meaty goodness—a phrase we hope we never have to say again—and you could probably eat it on its own if not for the tender striploin on top.

Wash it all down with a Sensei Spritz (P290) if you’re a matcha stan or a ginger ale aficionado, or a Whisky Highball (P280) if it’s after 5 p.m. They’re both simultaneously fresh and biting, each in their own way. End your meal with the Torched Banana (P250)—by virtue of the name it doesn’t sound like much, but this is one of those monikers that under-promise but over-deliver. The tofu cheesecake and miso butterscotch just don’t let up, and the fried cilantro—don’t knock it—adds a hint of herb you didn’t know your desserts needed.

On the other hand, you could keep it classic with the Sensei Chocolate Cake (P390), even though there’s nothing “classic” about it, what with the mango-yuzu curd that adds a much-needed sour element to the dark chocolate and earthy matcha.

Sensei’s approach is a two-pronged one, in a way; it’s a return to the basics in terms of ingredients, but the chef’s techniques and flavor combinations tend to read unorthodox without disrespecting the source material. “Many of our diners have been with us for, what, eight years? I owe them a lot. That means constant updating… constant things I continue to discover,” says Chef Bruce. So whether you’re a regular at this sushi bar in the south or you’re a first-timer looking for a culinary adventure, the only requirement here is a willingness to learn and explore; class is in session again.

Sensei Bf Homes Paranaque Evergreen Adventurer Seasoned Japanese Savvy
Your Guide to Thriving in This Strange New World
Staying
In? What to watch, what to eat, and where to shop from home
OR
Heading
Out? What you need to know to stay safe when heading out