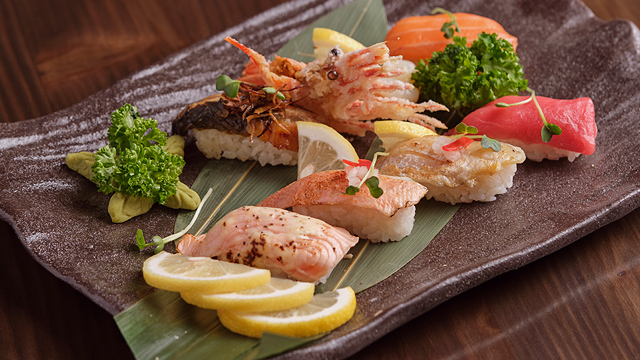 Sen-ryo's Nigiri Set Is a Little Adventure in Each Bite

The Hong Kong-based sushi bar is now open at The Podium.

(SPOT.ph) If you’ve ever been to Hong Kong, you’ve probably heard of Sen-ryo. This popular chain is known for its elevated take on the kaitenzushi (a.k.a. conveyor belt sushi) concept—elevated in that the ingredients are about as fresh as you can get them, and the sushi is prepared by hand, as it would be in a more traditional environment. And now, Manila can finally get a taste of the premium sushi and sashimi the restaurant chain has to offer at its first branch at The Podium.

But unlike its branches in Japan and Hong Kong, Manila’s first-ever Sen-ryo ditches the conveyor belt concept for something that’s a little bit more laid-back and intimate. It was an intentional choice for owner Eric Teng, who also brought popular kaitenzushi restaurant Genki Sushi to the Metro. Sen-ryo, after all, is known to be Genki’s more sophisticated sister restaurant.

“We wanted the Manila one to feel more like a lounge,” Teng says. “In [the] Hong Kong and Japan [branches], customers eat on a time crunch. Here, the furnishings, the lighting, it’s not meant to rush you.”

And that laid-back, intimate vibe is clear in the restaurant’s interiors. They’ve traded in the conveyor belt for more seating, such as comfortable couches where customers can patiently wait for their orders, and two private areas that mimic traditional Japanese dining rooms. Bamboo is also a recurring theme. Teng shares the bamboo paneling that makes up Sen-ryo’s façade is actually inspired by the bamboo mats that chefs use to make sushi rolls. It’s only fitting, as sushi and sashimi are the main draws to this restaurant.

Fresh is probably the best word that can be used to describe Sen-ryo’s menu and nothing exemplifies that more than their Signature Sashimi Set (P2,800). This hefty platter of fresh seafood comes with a whopping six kinds of sashimi, from buttery Norwegian salmon and melt-in-your-mouth otoro or fatty bluefin tuna to briny squid noodles and firm Hokkaido scallops. There are even a few deep-fried shrimp heads on the platter, to serve as a nice break from all the raw seafood.

Similarly, Sen-ryo’s take on nigiri puts a premium on its toppings. If you want to try a bit of everything, check out the Signature Nigiri Set (P990), which comes with seven types of sushi, including Seared Salmon with Cheese. It sounds like an unusual combination, but the creamy tartness of the cheese complements the salmon’s briny flavor quite nicely.

Don’t sleep on their sushi rolls, either. Their Snow Shrimp Roll (P580) is an elevated take on the classic California Maki roll, topped off with some sweet shrimp and fresh onions for a nice bite. There’s also the Shogun Roll (P380), named after ancient Japanese warriors. It’s a relatively simple roll made up of crunchy fried shrimp and lotus root, but it results in a nice play on textures.

There’s more to Sen-ryo’s menu than just sashimi and sushi, though. The Sen-ryo Seafood Salad (P680) is hefty enough to be its own entrée, coming with tons of shrimp, salmon, scallops, and crabsticks. They’re tossed together with some bright greens and a sharp wasabi dressing that actually helps bring out the freshness of the seafood even more. The Shiira Carpaccio (P380), meanwhile, can only be described as a Japanese take on the classic kinilaw, with thinly sliced mahi-mahi topped off with a zesty, lemony dressing.

True to form—at least when it comes to Japanese food—that kind of simplicity is rampant throughout the menu. The Grilled Scallop Skewers (P680) are lightly seasoned with salt and pepper before being tossed on an open flame, but the minimal preparation only emphasizes the scallops’ delicate and buttery texture. The grilled Garlic Butter Shiira (P480) is a bit more complex, but the buttery and peppery sauce works well with the flaky white fish.

Wagyu beef is also a prominent ingredient on their menu. Purists can opt for the Wagyu Beef Skewers (P780) if they’re simply looking for fatty and tender flavor of this premium cut. But for those who aren’t afraid of a little experimentation, don’t skip their Wagyu Beef Yakiudon (P580). Chewy udon noodles, tender beef slices and fresh vegetables are all stir-fried together in a sweet soy sauce, making for a noodle dish that’s simply an umami flavor-bomb.

While most of Sen-ryo’s dishes focus on more traditional aspects of Japanese cuisine, their desserts are a little bit more out there. Take the Mt. Fuji Jelly (P280), a blue dessert that takes its name from the fact that it looks just like the snow-capped mountain. It’s a dessert that tastes just like bubblegum ice cream. There’s also the Apple Jelly (P280), another dessert that may remind you of a certain jelly-based snack from your childhood. It comes with a sweet apple compote and vanilla ice cream.

Opening up a franchise in an entirely new location is always difficult, especially if it’s a franchise with an already established fan base. But Sen-ryo’s first foray into the Manila market isn’t afraid to experiment, whether it’s with a new concept or bold and fresh flavors.