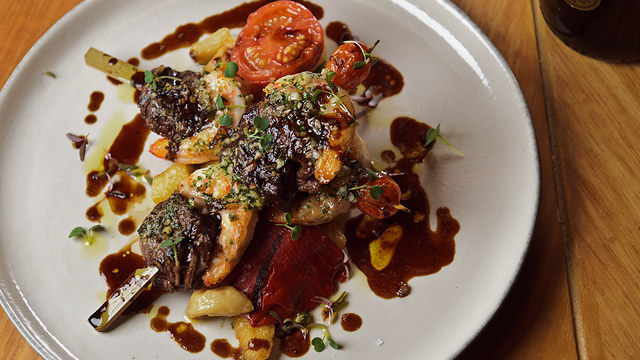 The Surf & Turf Skewers are a must-try.

(SPOT.ph) It’s a little difficult to compare Cartel Deli’s new arm to anything we’ve seen in the past—even their own, older concepts—but that’s because David Martinez-Collado spends so much time taking bits and pieces from his travels that, eventually, they become their own thing when he finally completes the jigsaw that is known now as Little Spain.

It feels modern with the touches of steel and the lone neon sign, but influences of old Spain are very present. There’s something that’s both upscale and homey about it that can only be understood in your first 10 minutes there, but 10 minutes are all it takes. (It could be even fewer for old Cartel regulars, because Yardstick is still in charge of the caffeine!)

But if anything amounts to more than the sum of its parts, it’s the Smoked Salmon Arugula (P460). You can see how soft—not tender, soft—the coral-toned fish is before you ever sink your teeth into it, and the bitter bite of the arugula wakes you up a little, while the feta breaks down into a salty, crumbly paste in the middle of the sandwich. The bread is an excellently done ciabatta that doesn’t put up a fight, but doesn’t go soggy easily either. (What magic is this?)

If you’re in a rice mood—and we’re all bound to be, at least thrice a week, we’d say—the Arroz Bowls are your friends. They all come with a fried egg, which we implore you to break over the fried red rice and cherry tomatoes. All of the viands are obviously tasty, but the standouts for us are the Pollo Inasal (P510) for its smokiness and the Salmon (P540) for how well the flavor and texture stand up to the rest of the dish.

Hanging out in a group? You’ve got to go the tapas route. The Fried “Calamares” (P490) is a plate that’s almost too easy to pick at—the squid is tender under the rough, crunchy breading, and hold the spicy kimchi and creamy aioli effortlessly. For those who love their cured meat, the “Sobrasada” Spring Roll (P480) delivers on that front with chorizo. Pro tip: Dip it in the honey and thank us later.

But for something more straightforward, the Salpicao (P590) is your best bet. The only downside is you might want to just order this with rice and ditch your friends. That’s how wonderfully salty, garlicky, and well-sauced it is. A similar sentiment could apply to the Surf & Turf Skewers (P790/half, P1,290/full), served with crispy-on-the-outside, fluffy-on-the-inside fried potatoes and beautifully charred peppers.

And to round it all out is the Manchego Cheesecake (P220). The crust alone is impressive in how it just straddles the line between flaky and soft, almost blending in with the actual cheesecake if not for the thin layer of jam in between them. It’s not too much of anything; if balance was a dessert, it would be this cheesecake. Call off the search.

It almost doesn’t matter if you’re specifically looking for Spanish-inspired food, because you’re bound to find something you like at this place regardless. If anything, it feels wrong to box them in so, when the flavors absolutely do not feel like they fall into any one category—there’s a world of options waiting in this Little Spain.