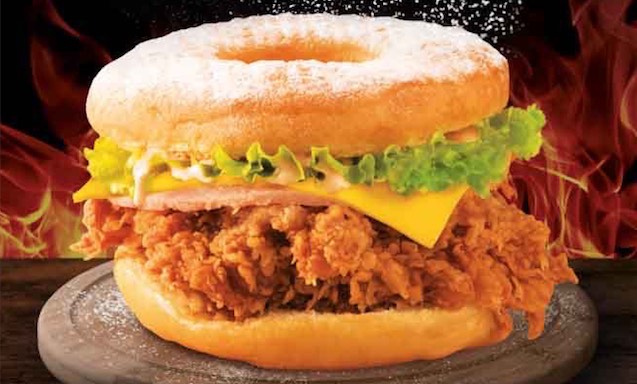 Talk about balancing the savory with the sweet!

(SPOT.ph) You’ve had your dessert fix at KFC, and you’ve definitely had your spicy fix there, too—but have you ever had them together? KFC’s latest offering, the Donut Zinger (P145/a la carte, P199/meal), lets you do just that. For now, you can only find this sandwich in their branches at Vista Mall, Diplomat, San Joaquin, Robinsons Cainta, Fort Bonifacio, and Commonwealth, and only until February 16.

Here’s what we know: The Zinger fillet remains as you know it: spicy, crunchy, and juicy on the inside. The two doughnuts in the equation are soft and sprinkled with powdered sugar—like good doughnuts should be. Throw in some cheese, smoky chicken ham, and Srirarcha mayo, it’s safe to say you’ve got one heck of a sandwich.

If you’re really looking for an adventure, though, there’s a version of it with pineapple instead of cheese going for P150 in KFC branches in Retiro, SM Annex 1, Malabon, Farmers Plaza, St. Joseph, and Gracepark.

Yeah, we understand—spicy chicken fillets and doughnuts together sound a little out of one’s comfort zone, but stranger things have happened. After all, KFC is no newbie to experimentation, especially when it comes to the Zinger. It first launched in 1984, but the spicy chicken sandwich didn’t hit U.S. shores until fairly recently. They’ve even gone so far as to launch it into orbit. What won't they do?

Kfc Fried Chicken Doughnuts Savvy Adventurer Limited Edition
Your Guide to Thriving in This Strange New World
Staying
In? What to watch, what to eat, and where to shop from home
OR
Heading
Out? What you need to know to stay safe when heading out