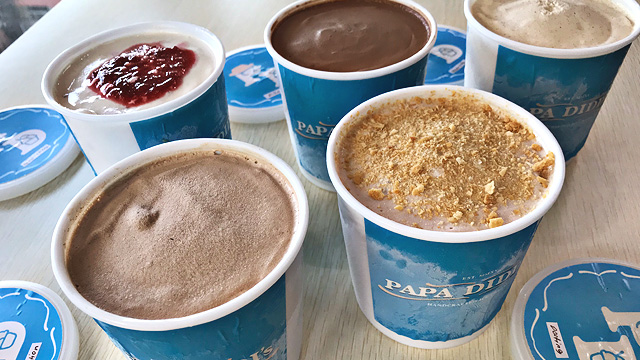 If You've Ever Wondered What Dating Tastes Like, This Ice Cream Is for You

(SPOT.ph) Love is a journey of different phases. Very rarely do you just become lovers in a snap; there’s joy, there’s hurt, and it requires constant work. Whichever stage of love you’re in, you can mark the upcoming holiday (you know which one we mean) with Papa Diddi’s Handcrafted Ice Cream. The local ice cream maker's special Valentine’s ice cream line includes five flavors (P80/scoop, P325/pint, P1,850/gallon), each representing one phase of love. Better hurry though, as these flavors will only be available until the end of the month!

Attraction is when the person in question first garners your liking, and Papa Diddi’s represents it with a mint-chocolate scoop—because you always want the feeling to stay fresh. (Ba-dum tss.) For the Dating stage, Papa Diddi’s makes an ice cream patterned after a very much first-date worthy dessert: strawberry cheesecake. It’s smooth and creamy, with just a hint of tartness from the berry to counter the cheesecake base’s richness.

No relationship is perfect; for many, there will inevitably come a point of Disappointment. For Papa Diddi’s, this comes in the form of a whiskey-infused chocolate ice cream that’s bold and bittersweet. Persist, however, and you get Stability—the stage where you can accept even your partner’s quirks and imperfections—and it comes in the form of a rather unusual but delicious ice cream flavored with sweet potato and cinnamon.

If you manage to get through all obstacles, you’ve got Commitment—the ultimate stage. For this, Papa Diddi’s goes for a white chocolate ice cream with fresh strawberries that’s both tart and creamy. Don’t be fooled though; this is a stage that requires consistent effort from all parties to thrive. (By that, we mean you can consistently go back for another serving!) If not, you might end up regressing to the previous stages—which, in the context of these ice cream flavors, might not be such a bad thing.

Papa Diddi’s Handcrafted Ice Cream got their start when they opened their first branch on Maginhawa Street in 2015. They make all their ice creams from scratch, using ingredients sourced right from their family’s farm, in a wide range of flavors that you’d be hard-pressed to find anywhere else. A few they’ve done are the Forbidden Rice, Sweet Basil, and Dulce Gato—and they’re always experimenting with new ones. In 2018 they launched their own ice-cream subscription service that sends you new flavors every month, right at your doorstep. It’s a great option for anyone who loves ice cream and doesn’t mind stepping out of their comfort zone.

Papa Diddi's Papa Diddi's Handcrafted Ice Cream Ice Cream Valentine's Day Savvy Adventurer
Your Guide to Thriving in This Strange New World
Staying
In? What to watch, what to eat, and where to shop from home
OR
Heading
Out? What you need to know to stay safe when heading out