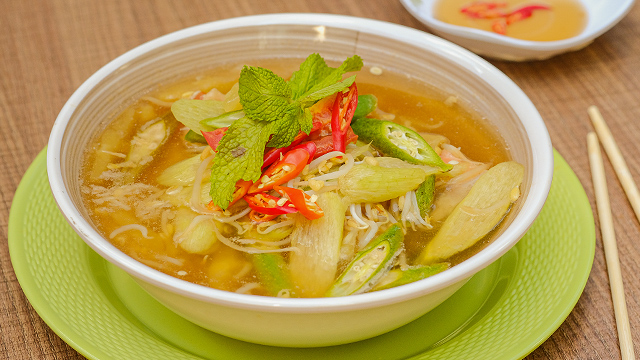 It's from the same folks behind Vietnam Food House!

(SPOT.ph) The lucky workers of the GT Tower International in Makati are in on a secret. Hidden within the MTRo Food Station on the 12th floor is Cai Be, an unassuming stall that serves excellent Vietnamese fare. With a glass case displaying samples of their offerings, the family-run business serves home-style Vietnamese eats that range from noodles, viands, set meals with rice, and more at reasonable prices. But there’s one dish in particular that draws people in, and for very good reason.

Nicknamed the “Vietnamese sinigang”, the Canh Chua Ca (P180) is a soup which finds similarity to the Filipino sour soup, but gets its sourness from pineapple. The fruit lends the clear soup base a subtle tang and pleasant sweetness, which dominate much of the flavor profile before it ends on a surprising spicy note that really perks up the senses. Adding bulk to the soup is fish (they use whatever they can get from the market on any given day—salmon head, on the day of our shoot), okra, taro stems, tomatoes, and bean sprouts for crunch. Stir in a little or a lot of the spicy fish sauce if you must have more heat; either way, it’s a soup that’s as vibrant as it is soothing, perfect for jolting yourself out of the grogginess on a dreary workday.

Cai Be is heralded by Annie Nguyen de Lemos, who also handles Vietnam Food House, a famed Vietnamese restaurant in the '90s that previously had branches in Harrison Plaza and Megamall, but currently only operates at the Asian Development Bank cafeteria. Hailing from Vietnam herself (specifically, from the Vietnamese province from which this establishment gets its name), De Lemos showed off her cooking prowess with her winning home-style Vietnamese fare, and had a clientele that included high-ranking politicians. When the opportunity to open up a stall at the MTRo Food Station came about, she took it, along with her daughter Myrna Guevara, who now handles operations.

Cai Be retains much of the soul of Vietnam Food House, with a mostly-similar menu of Vietnamese classics. Their use of fresh local produce makes even the simplest of dishes shine, like the Goi Buoi (P150), or fresh pomelo salad. This stellar starter offers plenty of contrasting textures and flavors, bringing together crisp lettuce, plump and tender shrimp, juicy pomelo, herbs, and crunchy peanuts in a nuoc mam dressing that balances sweet, salty, and sour flavors. Such is also the case with the Goi Cuon (P150) or fresh spring rolls, which hides an interior of shrimp, crisp vegetables, and chewy vermicelli noodles, and it really comes to life when dipped in the sweet and nutty peanut sauce served alongside.

Though Cai Be keeps the flavors true to what you’ll find in Vietnam, they don’t hesitate to make adjustments as necessary, as they do in the Cha Gio (P120), or fried spring rolls. Though traditionally made with a specific kind of rice paper as the wrapper, Guevara shares that they find it too delicate to keep all the fillings in without disintegrating too quickly, for which reason they substitute the sturdier local lumpia wrappers. Inside is a mixture of pork and ear mushroom, which packs tons of umami in every bite—especially when given a dunk in the sweet and tangy nuoc cham dipping sauce.

Notably, De Lemos makes almost all components from scratch at her very own home kitchen every single day—and boy, does it make a difference, especially in her soups. The Pho Tai (P185) or beef noodle soup boasts a complex-tasting beef broth, flat rice noodles, and beef strips. Boiled for several hours, the broth is at once beefy and aromatic with herbs, with a fair amount of body and rounded out with a natural sweetness—and though you’re encouraged to stir in hoisin sauce, chili sauce, and/or preserved chili to further flavor the soup, trust us: you hardly need it. The Hu Tieu Tom (P185) or seafood noodle soup, on the other hand, uses a milder—but no less tasty—chicken broth base, which supports the shrimp, squid balls, fish cakes, and thinner rice noodles without overpowering the mix. Each bowl is served with bean sprouts and fresh herbs, which you can stir into the soup for additional freshness.

Beyond the more popular pho and spring rolls, Cai Be has relatively unusual Vietnamese dishes too. Don’t miss out on the Ca Kho (P180), a dish of catfish cooked in caramelized fish sauce. This renders the catfish ultra-tender that it practically melts in the mouth. The sauce itself is ultra-flavorful, too—a tad sweet, a tad savory, and adds tons of flavor when spooned onto steaming white rice.

What perhaps ties together the selections at Cai Be is the slow, traditional approach De Lemos continues to take to this day, especially in the face of the fast-paced, shortcut-laden style of cooking prevalent today. Evident in the freshness of the food and the unbeatable depth of flavors is the love she pours into every dish. Uncommon as Vietnamese food may be, Cai Be renders it so homey and so comforting, it almost feels like one of our own.

Cai Be Vietnamese Cuisine Gt Tower International Mtro Food Station Vietnam Food House Vietnamese Food Adventurer Savvy Evergreen Makati
Your Guide to Thriving in This Strange New World
Staying
In? What to watch, what to eat, and where to shop from home
OR
Heading
Out? What you need to know to stay safe when heading out