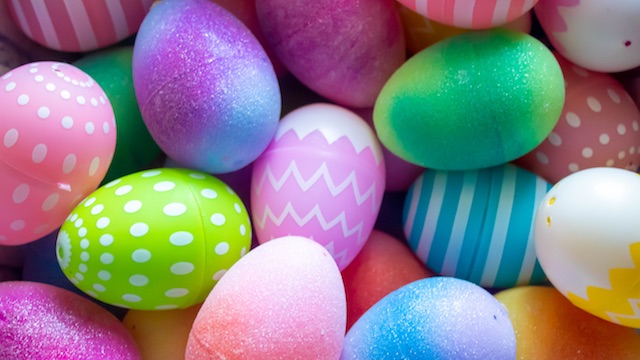 The Fascinating History of How Eggs Became Associated With Easter

They were originally buried underground to encourage fertility.

(SPOT.ph) Holy Week in the Philippines is no small occasion. It begins with Palm Sunday and concludes with Easter Sunday, when families come together and celebrate the resurrection of Christ. One of the most common symbols associated with the occasion is the humble egg, which is usually painted in bright colors and given intricate designs. But why are they associated with Easter, and how did they come about?

There are multiple theories on Easter eggs’ origins; some would argue that Easter eggs may, in fact, not be originally Christian. Eggs symbolize rebirth and fertility in many cultures, including that of Iran, Egypt, Ancient Greece, and Rome.

Many point to it being pagan in origin, with Easter originating as an observation of the Spring Equinox. The occassion was interpreted as the return of the sun God. Meanwhile, Venerable Bede, an English monk who wrote the first history of Christianity in England, argues that the word easter came from Eostre, a pagan fertility goddess in English and Germanic cultures.

A related story in an article by Time points to Easter as an early Anglo-Saxon festival centered around the goddess Eastre and the coming of spring. Eggs were an important part of the celebration, being eaten and possibly buried under the ground to encourage fertility. As Christianity came into the picture in the 15th century, the egg would come to symbolize the resurrection of Jesus Christ.

The more Christianity-oriented stories note that the fasting rules for Christians during Lent were quite stringent, banning the consumption of any meat or animal product—including eggs. In response to this, they hard-boiled eggs from their chickens and stored them, then gave them out to the poor around the Easter holiday. Easter was also their first chance to eat eggs after the said period of abstinence.

Why are the eggs colored?

The practice of dyeing eggs goes back to ancient times, with Celts especially favoring the color red for the practice. Meanwhile, one of the earliest pieces of evidence of the practice in Britain dates back to 1290—the book Stations of the Sun: A History of the Ritual Year in Britain narrates that the household of Edward I obtained 450 eggs to be colored or covered in gold leaf and given away among the royal entourage for Easter. Two centuries later, the Vatican sent Henry VIII a silver-enclosed egg, which was also called “eggsilver.”

Painting eggs is also a tradition in the Orthodox and Eastern Catholic churches, where eggs are painted red to symbolize the blood of Jesus Christ as he was nailed to the cross. Priests bless the eggs at the end of the Easter Vigil and give them out to the congregants; the shell is said to represent the sealed tomb of Christ; cracking the shell represents his resurrection.

In the 13th century, residents of English villages would bring Easter eggs as gifts for their manorial lords on holidays as well as to the church on Good Friday.

By the late 19th and early 20th centuries, colored Easter eggs became giveaways that were especially favored for children, as there was a shift of ideas toward family-friendliness at the time. The Victorian middle classes were said to be fascinated about old traditions, and thus easily welcomed the egg-dyeing tradition.

From there came Easter egg games that are still played today. There are Easter egg rolls, a game meant to symbolize the rolling away of the stone from Christ’s tomb. It entails rolling eggs using spoons to see who travels the farthest without breaking. The game has been around since the 1870s, as Washingtonian children would roll Easter eggs down a terraced lawn on the West grounds of the U.S. Capitol. In 1876, however, the Congress decided to pass a legislation restricting the public use of the Capitol grounds—thus restricting any egg-rolling. Thankfully, President Rutherford B. Hayes opened the South Lawn to egg rollers by 1878. It is now held annually at the White House, to the delight of children and their parents.

On the other hand, there are Easter egg hunts, where eggs are hidden for children to find and collect. These are said to go way back to the 1700s, during which the Pennsylvania Dutch had a belief about an egg-laying hare called Oschter Haws or Osterhase. Children were made to build nests for the hare to lay in, then search for the resulting eggs. The hare would go on to become the Easter bunny, and the practice of searching for the eggs would go on to be the egg hunt.

Religious beliefs aside, Easter eggs have made their mark as a beloved symbol for children and children-at-heart. Perhaps most importantly, they are a sign that even in the darkest times, there will always come a time for rebirth and renewal.

Easter Easter Eggs Holy Week History Adventurer Seasoned Savvy New Normal Foodie
Your Guide to Thriving in This Strange New World
Staying
In? What to watch, what to eat, and where to shop from home
OR
Heading
Out? What you need to know to stay safe when heading out