Explainer: What Is the Dole Whip and How to Make It at Home
Loading
Already a member? Log in
No account yet? Create Account
Spot.ph is your one-stop urban lifestyle guide to the best of Manila. 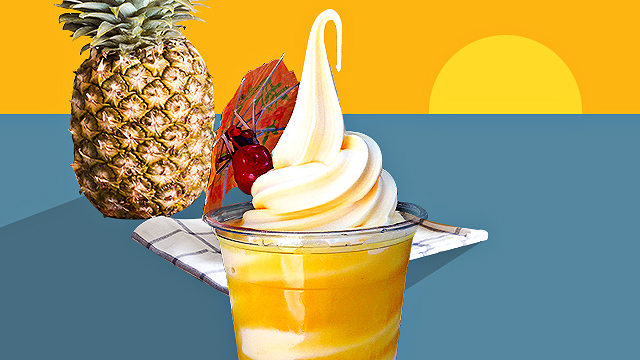 If You Haven't Heard of the Dole Whip, Here's What You're Missing

Plus, it's easy to make at home!

(SPOT.ph) Even with most commercial places closed in light of the COVID-19 pandemic that’s currently sweeping the world, companies are finding ways to bring their brands to us in some way, shape, or form. In April, Disney Parks released the recipe for its famous Dole Whip dessert on the Disneyland app My Disney Experience, causing excitement among Disney fans—and dessert fans in general—around the world.

At its core, the Dole Whip refers to a pineapple-flavored soft-serve available at Disney parks around the world. It’s as zesty and fruity as it is cold and creamy—perfect for noshing on while you’re strolling along the park on a hot summer day. It’s also got a cult following, spurring long lines and prompting customers to snap photos for posting on social media.

How the Dole Whip Came to Be

According to Bon Appetit, the story begins with Dole sponsoring Disneyland’s Enchanted Tiki Room in 1976. At the time, the attraction only served pineapple juice and spears—that is, until 1984, when Dole introduced the Dole Whip. This treat was only available at selected stores, unlike other Disneyland desserts that were available throughout the park—and this sense of exclusivity ironically contributed to its popularity.

Over 3.4 million cups of Dole Whip were served between Disneyland and Walt Disney World in 2016, says Bon Appetit. You can even find Dole Whip-themed merchandise such as clothing, plushies, candles, and even phone cases—talk about showing off some love for the famed treat. Through the years, food blogs and publications have posted their own takes to “hack” the dessert at home—some are made with coconut milk, others use frozen bananas for extra creaminess.

Making the Dole Whip at Home

The recently released recipe isn’t 100% the same as the original—a dairy-free dessert said to be made with non-dairy creamer, sugar, and natural flavoring and coloring; other sources list that it’s made with a pineapple-flavored dry mix made with dried pineapple juice and stabilizers. The Disney Parks’ recipe entails just three ingredients that you can easily pick up at the grocery store: vanilla ice cream, pineapple chunks, and pineapple juice. But it’s so easy that it’s worth a try anyway—all you need is a blender.

Simply combine a big scoop of vanilla ice cream, four ounces of pineapple juice, and two cups of frozen pineapple chunks in a blender, then blitz away until you get a smooth mixture. Enjoy it as it is, or spoon it into a star-tipped piping bag—the kind you use for frosting cupcakes—and pipe it onto your vessel of choice. Put on your sunglasses if you want, just to get that tropical vibe going; sit back, relax, and enjoy—you get a refreshing treat that’s perfect for summer heat. And if you're curious, Dole also has their DIY Dole Whip recipe up on their official website.

With the abundance of pineapples in this tropical country, coupled with its ease of preparation, anyone can travel by taste. If you’re ready for your next kitchen project after dalgona coffee, give this one a try.

Dole Whip Pineapple Disneyland Cooking Adventurer Savvy Seasoned Recipe Trending New Normal Foodie
Your Guide to Thriving in This Strange New World
Staying
In? What to watch, what to eat, and where to shop from home
OR
Heading
Out? What you need to know to stay safe when heading out