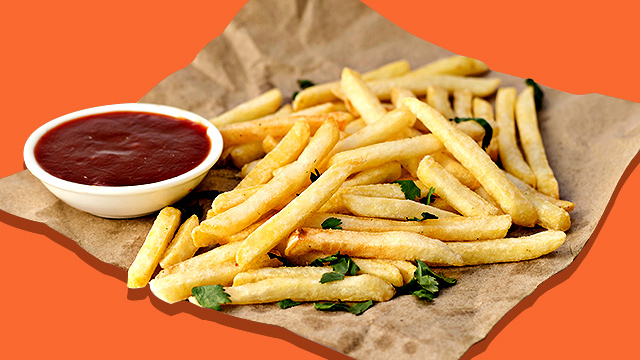 Because the fries you get with food delivery deserve better.

(SPOT.ph) French fries are one of those snacks that are great when consumed fresh upon frying: perfectly hot, with a crispy exterior and soft, potato-y interior that makes it hard to resist grabbing one piece after the other. Cooled fries, however—as you can sometimes get when you order them for takeout or delivery—are another story. Aside from being, well, cold, they’re generally damp and soggy, losing the original fries’ outer crispness and developing a dense, starchy consistency within.

But is there a way to bring them back to their original glory? We scoured the Internet for popular reheating methods and sought to find out.

The Science of French Fries

What makes freshly fried fries so good, anyway? This is thanks in no small part to the deep-frying process, where food is submerged in hot oil, whose heat cooks the food on all sides at once. Potatoes are high in starch, which—when warmed—clump into granules that pull in water and grow larger at high heat, until they burst and form an airy, sticky, batter-like substance that crisps up and thus forms the crust. This sturdy crust forms a barrier between the oil outside and the food inside—which traps the water inside and lets the food steam itself from within, resulting in a moist and fluffy interior.

But as fries cool down, water starts to move out of the starches, which decreases the fries’ fluffiness. The water goes right into the crust of the French fry, leaving it soggy. The coldness can also dampen flavors, and as they cool down, their aroma disappears—leaving them practically flavorless.

We’re no scientists, mind you—neither are we chefs. But we did our best to maintain consistency between trials by using French fries from McDonald’s that were purchased through delivery the same day and that had cooled at room temperature for about an hour. We added oil where necessary, but we refrained from adding any seasoning that might change the flavors of the fries.

Following the tips from the Food Network, we preheated the oven to 204°C, placed the fries on a sheet tray lined with a crumpled-up piece of foil, and sprayed them with cooking spray. According to the article, the total reheating time would be five to 10 minutes—our small batch looked ready at the five-minute mark. The result? Hot, crispy fries—almost just like what you get in-store, if not a touch less oily. We loved that this method entailed little to no mess or fuss; just wait for the oven to heat up and pop them in until they’re done. The caveat is that the fries feel a tad drier and less fluffy on the inside, but we’re not mad at the results at all.

There are two options for reheating on the stovetop: You can do it with or without oil. We wanted to see how the methods would compare, so we tried it both ways.

We first went the oil-free route, following the instructions from Wide Open Eats, by heating up a cast-iron skillet to medium-high heat and spreading the fries out in a single layer, then cooking each side for about 30 seconds to a minute. Although the resulting fries were generally crispy, they were inconsistently so, with some pieces being crisper than the others. Those that did crisp up were crunchy, all right, but in a stale way—which doesn’t necessarily mean they taste bad, but still isn’t the most ideal texture for fries.

Still following Wide Open Eats' instructions, we then tried a new batch with oil by heating the skillet over medium-high heat and adding oil to the pan. According to The Kitchn, about two teaspoons for every cup of fries should do—and letting it heat up until it shimmers. We then added the fries in a single layer and let them cook for about 30 seconds to a minute per side. Although we were afraid this would make the fries too greasy, this surprisingly wasn’t the case: after draining the excess oil, the resulting fries were perfectly hot and crisp, and not in a stale or dull way. Their light but crispy exteriors made way to soft, fluffy interiors—almost as if they were freshly ordered.

Almost every resource we found advised against reheating fries in the microwave, but our curiosity got the better of us and we wanted to try it anyway. We experimented with nuking them in 15-second intervals. For the first 15-second interval, the fries turned out crunchy on the inside and soft on the inside—almost as if they were fresh off the fryer. By the next interval however (totaling 30 seconds), they retained a crisp exterior but turned up mushy inside. Another 15 seconds (totaling 45 seconds) and they got chewier, and by the last interval (totaling 60 seconds), the resulting fries were sweaty and soggy and all its crispness had just about disappeared.

Hands down, reheating soggy fries over the stove with a bit of oil produced the best results: They were perfectly crisp on the outside and fluffy within, coming close to what you get when you dine in. The oven method comes at a close second—the resulting fries are a wee bit drier, but it’s also the easiest method of the lot that still gets you great results. Finally, we’d caution against using the microwave—but if you must, keep a close eye on your fries and don’t go beyond 15 seconds of nuking.

French Fries Reheating Food Delivery Taste Test Adventurer Savvy New Normal Foodie Cooking Hacks
Your Guide to Thriving in This Strange New World
Staying
In? What to watch, what to eat, and where to shop from home
OR
Heading
Out? What you need to know to stay safe when heading out