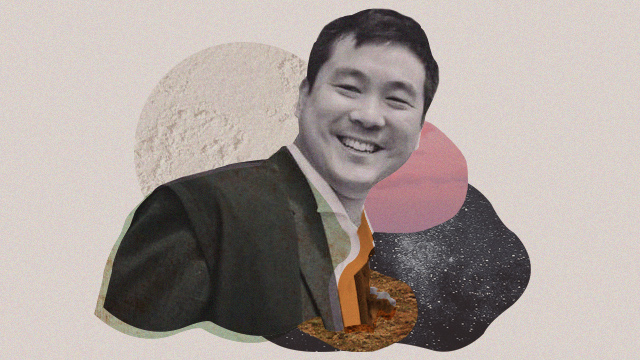 Food as Global Obsession, and Why Food Writing Can't Be Useful

A writer unearths a long-lost interview with Clinton Palanca.

[Ed's note: This essay was contributed by the author to mark the first death anniversary of respected writer and local food-scene fixture Clinton Palanca.]

(SPOT.ph) It all began at an event where people alternated chatting and chewing with relaxed dexterity. The second year of erstwhile foodie pilgrimage Madrid Fusion Manila was in full swing, and in one of its cocktail lunches, I was introduced to Clinton [Palanca] by a common friend.

We chatted a bit and I asked him if he could give me a few pointers on the short essays I’d written for Madrid Fusion’s conference catalogue that year. He made my day by saying that he’d found the pieces to be well written. Clinton unknowingly gifted me with a much needed reassurance in a time when I’d just begun taking food writing seriously.

Some months later, I received an invitation from him to write for SPOT.ph. He wrote and edited for them at that time, and he shared that its lifestyle section, especially food, needed beefing up. I ended up doing some essays with him as editor; looking back, I like to think that he mentored me somehow in the process.

I didn't get to know him well, but experiences we shared provided for fond memories.  We took a trip to Mindanao, and one night before a carinderia dinner, he excused himself to call his daughter. He intended to do so on the sidewalk, but I insisted that he stay in the car. Not that it was unsafe, but a fair milquetoast gentleman in slacks and loafers could've warranted unnecessary attention. After his call, we proceeded to order and I remember the premature satisfaction on his face when talking about and ordering  sticky and jiggly balbacua.

We were in Mindanao to do research. He was doing a food tour of the country, while I was there to gather material for a book on Mindanao food. Clinton was to edit it and write its introduction. Sadly, I’ll never get to read and savor what he would've written. There is however solace in the work he left behind. At times, I find myself turning to his essays, notes, and conversations for guidance. Even in death, he still manages to steer and help out.

He shared that he’d wanted to do the food tour for a long time now, a magnum opus of sorts, but he thought it difficult to go through at that stage in life. In the same conversation, he parted with a most precious piece of advice: never wait too long to do something.

This interview, done in 2016, was to be part of a collection of essays on food and culture I’ve been sitting on for a few years now. It was a short casual exchange that touched on his thoughts on food writing. It took about a year after his passing for me to heed his advice by sharing this and starting to work on it again.

Clinton Palanca: Writing is never a pleasure, though having written is.

Why food? You did short fiction in the past. And the writing you do nowadays are mostly essays on several matters, especially food.

Before food I was doing lit and philosophy. Both are so abstract, especially philosophy, that there came a point wherein I really became attracted to something tactile and sensual, like food. So I approached it first as a cook. I liked the pleasures of working with ingredients and trusting your instincts.

Food is tactile and sensual. How much has literature and philosophy influenced your writing?

Very much. Everything about good writing and bad I learned from literature, and how I approach questions and problems is essentially philosophical. That's why I always like to go back to first principles e.g., what makes a sinigang a sinigang, an ontological question, or see food as a text for interpretation, or do an enquiry into the ethics of eating this or that.

With regard to the philosophical approach, I believe that this is what makes your writing unique. The way you've approached writing about food is very important. You've incorporated other disciplines and perspectives into food.

Regarding the use of other disciplines, this is partly because food scholarship is still in its infancy. So it had to draw from other academic traditions, usually anthropology and cultural studies, to address the topics—and the topics are also 'parasitic'; thus you have food and culture, food and society, food and history, food and literature, food as art, etc.

Food today is a trend. Children are nows celebrity chefs on TV, culinary schools are profitable enterprises, and chef is a title like doctor or sir.

The interest in food is a trend, and an unexpected development. When I started in the mid-'90s, it was a bit of of an esoteric pursuit for someone who wasn't planning to pursue being a chef in a professional kitchen. So when the big deluge of food obsession came I felt like someone whose favorite indie band had been discovered and gone mainstream, or like someone who had been into crocheting before it became a worldwide trend. But I'm also beginning to wonder, what if I wasn't part of that specialist group of food writers that hearkened back to M.F.K. Fisher and all the way to Curnonsky? What if I was actually the first wave of the people who have made food a global obsession? So we should probably figure out why food is suddenly a global obsession.

But hasn't food always been a global obsession? The age of exploration came to be largely in pursuit of spices. How different was their obsession from ours?

Spices were commerce; in the '50s or '60s, say, the discourse on food was in relation to health. The current food trend is gastronomy. If you look at some ladies’ “about myself” on Facebook is “I love to eat!” Just a few decades ago this would have been considered unbecoming for a woman, or a few centuries ago would have been a sign of sinful gluttony.

So food has gone beyond necessity and commerce to where it is now. Is this phenomenon restricted to those with wherewithal and luxury of choice?

Mostly, but not entirely. Secularism and new ideas about pollution and taboo have a lot to do with it. In the West there are no more food taboos and people have forgotten the association of certain foods with particular religious feast days, or eating fish on Fridays, et cetera. But the equivalent of the  halal/haram or kosher distinction in the christianized west is the 'organic' label. As well as fair-trade, and other moral based distinctions.

Would it be fair to say that our concern with concepts of organic, fair-trade, and other ethical/moral notions describe our milieu in food history?

Yes, primarily white upper middle class in the West but of course we have our own little pocket of Forbes Park organic purveyors and that Healthy Options (Wealthy Options) has so many branches means there are enough people who care. I think the moral landscape in food is dominated by the idea of organic and ethical eating, while the intellectual landscape is dominated by the search for authenticity.

Is the food writing we have now in the Philippines good enough to serve as a foundation for our own food scholarship? We have writers doing a lot of stuff on authenticity, not necessarily discussions on what is authentic or not, but research on traditional ways are being done extensively. A lot of people are doing articles on ethical eating as well.

There's actually more done than people think, and I myself am having trouble keeping up. But the main problem is dissemination. A lot of the scholarship is not widely available, though it's there to be had if you look hard enough for it. In a way it's like the early days of food writing in the international scene. Sometimes the quickest way is to go to the author and get a copy of what you're looking for. But the other problem is one that plagues everything in the Philippines: fragmentation. There are more groups of food researchers than I can keep track of, and then these groups have splinter groups, and so on. I'm actually not in the scene enough to understand these, so I read what I can get my hands on and write based on the research that's available to me and try to label anecdotal information as such. It's similarly competitive in the food reviewing scene, but then you'd expect that.

There's no way to defend the utility of food writing, just as there's no way to defend the liberal arts in terms of usefulness. Some scholars are really working on issues of food sustainability and global currents and they are lucky in that their research is naturally palatable to an academe that sees most food studies as indulgent or esoteric or, generally, not worthy of systematic research. There is also an activist element in some food writing which consists mostly of companies [that] are evil, and this is also very important work, but it's only one aspect of food studies. The bulk of food studies will be about food culture and gastronomy and this will always be of limited utility and be seen as whimsical and lightweight.

I have often wondered how to justify writing about food and advocating for the emergence of a real Philippine cuisine in a country where most of the population is barely subsisting, and in the end I have decided that the two are irreconcilable: not that we should stop what we're doing, but that we can't look for justification nor affirmation for what we're doing, but neither should we feel guilt or embarrassment for pursuing our line of inquiry. It will always be like theater or literature and seen as a bourgeois and elitist pursuit and irrelevant to nation building. Food studies will never be useful in that sense, and I feel it should not try to be.

Con-00263 Savvy Seasoned Clinton Palanca Interview
Your Guide to Thriving in This Strange New World
Staying
In? What to watch, what to eat, and where to shop from home
OR
Heading
Out? What you need to know to stay safe when heading out