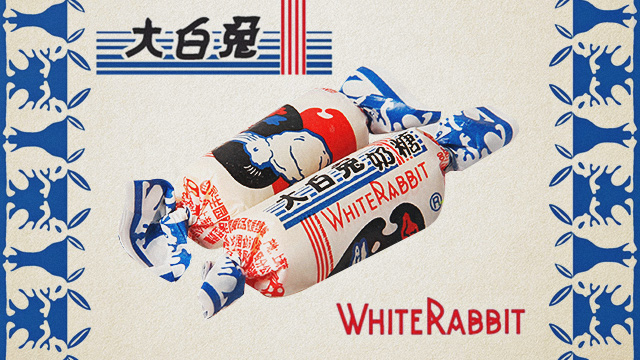 Plus other tidbits on how the candy came about.

(SPOT.ph) If you grew up in the '80s or '90s, chances are, you enjoyed many a piece of the milk candy known as White Rabbit. With its nostalgic white, blue, and red packaging, the Chinese candy holds a special place in the memory of many Filipinos. Aside from its distinctive chewiness and creamy milk flavor, White Rabbit is also well-known for its use of an edible rice paper to wrap the candy and keep it from sticking. It’s even inspired the creation of other treats like soft-serve, milk tea, and even face masks—pointing to the candy’s timeless appeal.

Why Was It Called White Rabbit?

White Rabbit Creamy Candy was launched by the ABC company in 1943. Believe it or not, the first version didn’t even feature a white rabbit at all: back then they were called Mickey Mouse Sweets and featured the famed Disney character. But by the 1950s, ABC—originally a private company—became nationalized, and the use of Western symbols was frowned upon. They thus redesigned the packaging to feature a white rabbit in 1959.

The candy proved to be especially popular—so much so that they were given away as gifts for the 10th National Day of the People’s Republic in 1959, and then-premier Zhou Enlai gifted a batch to U.S. President Richard Nixon in 1972. In 1976, ABC was absorbed by Guan Sheng Yuan Food Co.

In the years that followed, White Rabbit would be sold in more than 50 countries—including the Philippines. Aside from the original chewy, milk-flavored version from China, another flavor is sold in these parts: a hard candy with a more caramelized flavor, dubbed the “butter toffee” variant, which is manufactured by Candyman Philippines.

Why Was the Candy Recalled by the FDA?

While the creamy milk candy enjoyed steady popularity in the Philippines in the decades past, the Philippine Bureau of Food and Drugs Administration called for its recall in 2007 for allegedly containing formalin. Often used for making glue, plastic, and disinfectant, as well as for embalming human remains, formaldehyde-based solutions are linked to lung cancer and leukemia.

In turn, White Rabbit claimed that those findings applied to its counterfeit counterparts and not the authentic candy. They also presented an independent report by the Shanghai affiliate of the SGS Group (a.k.a. the world’s largest inspection and testing firm) that the candy had no toxic substances. Singaporean group Agri-Food and Veterniary Authority conducted tests and found that the candy was safe to eat.

But Cheng Ban Yek & Company, the local distributor of White Rabbit, eventually yielded, and ended up recalling its products from the Philippine market.

Over in China in 2008, more than 52,000 children became ill due to dairy products containing melamine. White Rabbit was listed as one of the milk products tainted with the chemical compound. This led to its removal from British supermarket chain Tesco, as well as cautionary warnings or recalls from food authorities in Singapore, Australia, and the U.S.

By 2009, White Rabbit made a comeback to the market—this time, as Golden Rabbit—using milk from Australia instead of China.

In the meantime, Candyman Philippines claimed that their version is safe and free of formalin.

Where to Buy White Rabbit Today

While the butter toffee version is easier to find in most supermarkets or sari-sari stores, the original White Rabbit Creamy Candy is a little harder to come by. You can find it at a number of sellers on Shopee and Lazada. Just be sure to clarify that you’re looking for the original milk version, and use your best judgment.

Better yet, why not wait until you can hunt down some White Rabbit-flavored ice cream, instead? Wanderlust Creamery had a version, and so did Carousel Creamery.

White Rabbit History Adventurer Savvy Seasoned Tpc-000001 New Normal Foodie Candy Childhood Snacks Childhood Sweets
Your Guide to Thriving in This Strange New World
Staying
In? What to watch, what to eat, and where to shop from home
OR
Heading
Out? What you need to know to stay safe when heading out