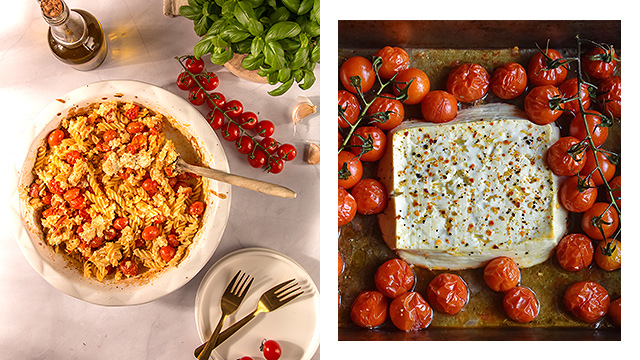 Time to channel your inner shef.

(SPOT.ph) If you've been on the World Wide Web lately—and we assume you have, considering that you're reading this article—you've likely stumbled upon the phenomenon that is baked feta pasta. At its core, the dish (which has gone especially viral on TikTok) involves cheese, tomatoes, and pasta—a combination you can't go wrong with, really!—and like many Internet-famous recipes, part of its appeal is its ease of preparation. It's had even the non-cooking inclined putting on their chef's hats and preheating their ovens, which is always a good thing! But how did it come about, and how the heck do you make it?

The Story of Baked Feta Pasta

Baked feta pasta has been everywhere on social media lately. Just search for "baked feta pasta" on Youtube, or the hashtag #bakedfetapasta on Instagram or TikTok, and you'll see what we mean.

But as Huffpost points out, the dish has actually been around since 2018 or 2019, depending on which version of the story you subscribe to. Some trace the idea to Tiiu Piret, who came up for a recipe for "Prosecco Spaghetti"—a recipe similar to the now-trending version in that it's got feta, but distinct in that it also includes prosecco, onions, and honey—in 2018. Others link it to Finnish blogger Jenni Häyrinen, who came out with a very similar recipe for "UuniFetaPasta" that went viral in her home country and even led to a feta shortage.

Häyrinen says she was unaware of Piret's recipe when she created her version. In any case, the two have since come in contact, and Piret has since made a blog post that praised Häyrinen's version.

The pasta's rise in popularity in the U.S. is credited to MacKenzie Smith of food blog Grilled Cheese Social, as Smith heard of Häyrinen's recipe from a Finnish friend and posted her take on the dish on the blog in 2019. She eventually filmed and posted a video version to her TikTok in late January of this year, and this caught the attention of many; as of writing, her video's got around more than two million views, 272,200 likes, 1,437 comments, and 73,800 shares—and it's inspired others to make and film their own versions, too.

How to Make Baked Feta Pasta

By now, there are countless variations of the recipe online. But the basic idea is as follows: Put a block of feta cheese and cherry tomatoes in a pan, drizzle in a generous amount of olive oil, and roast them in the oven. Once baked, stir them together watch as the feta (which gets naturally creamier from the heat), tomatoes (which soften and pop), and olive oil come together into an instant "sauce" that's part-tart, part-creamy, and lush as can be. From there, you can toss in the cooked pasta plus chopped fresh basil, then stir again. Ta-da, you just made your own version of the dish!

The recipe naturally lends itself to plenty of variations. Some include chili or red pepper flakes, some include garlic. Some also call for dried herbs to be tossed in with the feta and tomatoes before baking. Many suggest using Greek feta (made with at least 70% sheep's milk) in place of the more common cow's-milk version for a creamier texture. We don't see how you can go wrong either way; just toast some garlic bread to go alongside, and you've got yourself a great-tasting meal that gives you maximum results for minimum effort.

Pasta Baked Feta Pasta Tiktok Food Trends Trending Adventurer Savvy Tpc-000001 Staying In
Your Guide to Thriving in This Strange New World
Staying
In? What to watch, what to eat, and where to shop from home
OR
Heading
Out? What you need to know to stay safe when heading out