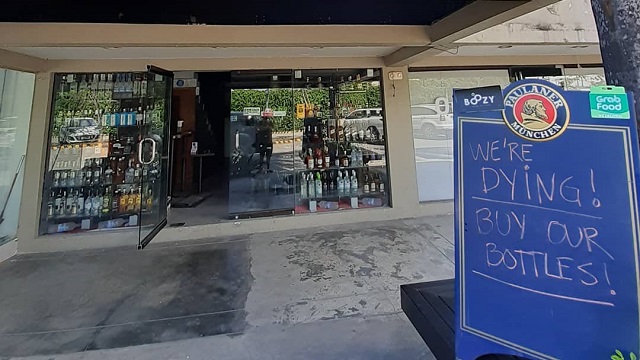 PSA: The Distillery Cebu Needs You to Buy Their Bottles

The popular nightspot has sounded a quarantine SOS.

(SPOT.ph) The Distillery Cebu has been a mainstay in the city's nightscape since they opened in 2012—but that doesn't mean they haven't been affected by the extended quarantine. The popular bar located along Governor M. Cuenco Avenue sounded the alarm on their Facebook page on Tuesday, February 23, asking for folks to help buy off their beverages. Check out the signage they put up outside their store:

"Expenses are piling up and the lockdown and liquor ban has been very painful for us," they wrote in the caption. The bar has been closed to the public since March 2020 when the quarantine started, but they have managed to keep more or less afloat since then. Still, it looks like the popular night haunt that doubles as a place to buy alcohol to bring home has reached a tipping point.

The store-slash-pub originally told those interested to buy to shoot them a message. With the OG post reaching around 1,700 shares as of writing though—and the outpouring of support—they had to change tactic. "We'll come out with a proper pricelist for the public tomorrow!!! Thank you Cebu for all your kind words and messages!" they added in the caption. Best to keep your eyes on their page if you would like to help out!

The Distillery Cebu opened nearly a decade ago in 2012. It followed the massive success of the same store-slash-pub branches in Metro Manila, at Eastwood, The Fort, and along Jupiter Street, Makati. We're sure you ended up at one of their branches on a wild night out sometime in the Before Coronavirus age.

Cebu is currently under modified general community quarantine status which means that mass gatherings are a definite no. The liquor ban was also reinstated by Mayor Edgar Labella on February 2, which barred public consumption of alcohol.

For more information, check out the The Distillery Cebu's Facebook page.

Adventurer Savvy Seasoned The Distillery Nightlife Topspot Cebu Cebu
Your Guide to Thriving in This Strange New World
Staying
In? What to watch, what to eat, and where to shop from home
OR
Heading
Out? What you need to know to stay safe when heading out