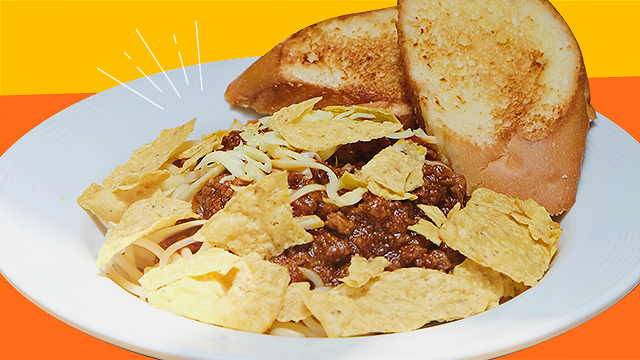 You can try it at these branches.

(SPOT.ph) As kids, most of us were less bound by social conventions—which meant there was no stopping you from imagining all sorts of possibilities that might be considered unusual or unorthodox, but might actually work. Now imagine if that unusual idea became the basis of an actual restaurant dish! Such is the case for 14-year-old Enrique and nine-year-old Andres, whose playful food-pairing idea has inspired Pancake House's new dish, the Spaghetti Nachos.

According to Enrique and Andres' mom, who prefers to keep her name confidential, the kids' spaghetti-meets-nachos tandem started some time back when they were at the beach having a conversation over a bowl of nachos. "Beside the nachos was a bowl of chili con carne that Andres thought was spaghetti sauce on top of noodles," she says in an exchange with SPOT.ph. The conversation evolved—as talks with kids usually do—and at one point Enrique told Jim that Pancake House's spaghetti would take really good with nachos. "The nachos would add just the right saltiness to the spaghetti. Andres added that the nachos would add the perfect crunch to the spaghetti."

Though neither of the kids had tried the pairing before, the mom shares that they seemed sure that it would be the perfect combination. The mom also happens to be a friend of Max's Group Inc.'s Chief Marketing Officer and Executive Director Jim Fuentebella, and Fuentebella heard of the kids' idea. "Jim asked them what they would call it and the both said, 'Spaghet-nachos'." Taking after this, Pancake House decided to turn it into a real dish and release it as a limited-edition menu item, which you can now try at selected stores.

"Needless to say they were so excited when Pancake House launched the dish that was inspired by them," says the mom.

Pancake House Spaghetti Nachos (P199/regular, P335/large) features spaghetti with meat sauce topped with cheddar cheese and crushed Nacho King tortilla chips. Curious? You can catch it for dine-in and takeout for a limited time, exclusively at these Pancake House stores:

Can't head out? Fret not, the dish will also be available for delivery starting June 7.

Pancake House is a homegrown franchise known for their all-day breakfast eats, including savory Filipino favorites and their flagship dish, pancakes.

Pancake House Spaghetti Nachos Adventurer Savvy Tpc-000001 Heading Out Staying In
Your Guide to Thriving in This Strange New World
Staying
In? What to watch, what to eat, and where to shop from home
OR
Heading
Out? What you need to know to stay safe when heading out