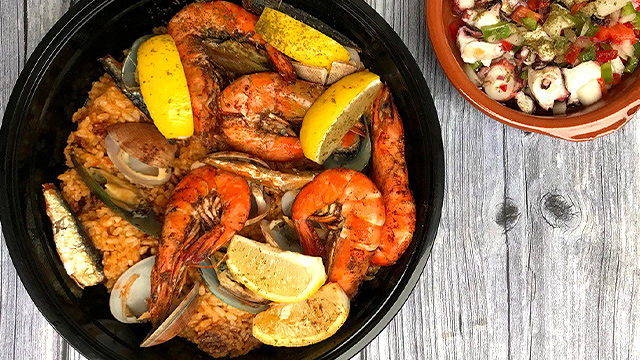 Chef Denise Campos has staged in Spain at some of the world's best restaurants.

(SPOT.ph) As far as Spanish food goes, the cuisine of the Basque region is a favorite. It showcases great local ingredients in the form of hearty dishes with fresh and full-on flavors—whether we're talking about a simple pintxo of olives, anchovies, and pickled peppers or a hearty plate of cod (a.k.a. bacalao). And while Manila is no stranger to Spanish eats, we recently got to try excellent versions of Basque-style dishes from an under-the-radar source that deserves lots of love. Check out M 46 Kalea, a home-based online seller with San-Sebastián-trained chef Denise Campos at the helm!

Here's why we can't get enough of M 46 Kalea and their Spanish food:

M 46 Kalea's menu is on the short side, with just six dishes on their current roster, but it's as focused as it is varied—every dish has a different personality and exhibits playfulness while still staying true to its Basque core. A great place to start is the Carrillera de Ternera (P1,200/good for two to three), or beef cheeks slow-cooked to a tenderness and served with a nutty garbanzo puree and zesty accents of pesto perejil. They also make the Txangurro Donostiarra (P1,050/good for three to four), or blue crab in a homey brandy-tomato stew topped with a pimenton-parsley crunch for a welcome textural contrast.

On the creamy end of the spectrum is the Bacalao Cremoso (P485/245 grams), a puree of umami-rich salted cod fish with pimenton; and the Txorizoa eta Gazta (P420/245 grams), a creamy-punchy mix of lightly-whipped cream cheese with chunks of idiazabal cheese and chorizo. These come in jars, and you can opt to spread on crostini or down by the spoonful ("some even [take them] with rice," says Campos). A livelier option is the Ensalada de Pulpo (P1,100), which has chunks of tender octopus with crisp chopped fresh peppers and onions, tossed in a vibrant vinaigrette that ties the all flavors together.

What you really can't miss, though, is the Arroz Vasco (P1,500/good for three to five)—a paella-like rice dish that Campos came up with given her love for Spanish cuisine...and rice. Campos cooks rice with ingredients like stock (or "liquid gold", in Campos' words) and saffron, until every grain absorbs the surrounding aromatics while retaining an al-dente bite. Though the rice base is sensational enough that we'd polish off a plain bowl of it, it also comes topped with a balanced amount of fresh prawns, mussels, clams, sardines, and squid that all retain a tender and succulent bite. Fresh lemon wedges for squeezing over the dish contribute even more vibrancy, and you get an overall mix that tickles the tongue from multiple directions—think bright meets savory meets umami meets subtly spiced.

Arroz Vasco translates to Basque rice, as San Sebastián in the Basque Country is by the sea, which means folks in the area have easy access to the freshest of seafood. "So that's basically the reason why my Arroz Vasco is studded with only the freshest and best quality of ingredients." Though it's similar to paella given Basque-style flair, Campos clarifies that she labels it differently for a reason. "Respecting Valencian culinary beliefs, you cannot call it a [rice dish] 'paella' if it doesn't come from Valencia [or] if the rice you use does not originate from Valencia, and so on," she explains. "Basically, if it isn't from Valencia, it's not a paella—it's labeled or called 'arroz'."

She also admits her Arroz Vasco is "everything but traditional" with respect to paella—not that this takes away from its drool-inducing appeal, in our book. "I was taught how to make a real paella by a friend who was born and raised in Valencia. But I decided to tweak it a little bit and it fortunately turned out to be a hit!"

Campos has always loved food, sharing that she would devour her grandma's home cooking growing up. She describes her grandma's cooking to be of "mostly Spanish influence" as her dad's side has Spanish roots. "There's just something about Spanish cuisine that hits the spot... I've always had this certain mad love for Spanish cuisine and its culture," Campos shares in an interview with SPOT.ph. "Because my lola fed us so well, it was hard for me to stray away from Spanish cuisine—be it Madrileño, Catalan, or Basque." With that, she found herself in the kitchen "cooking, doing little easy tasks, or just observing" with her mamaita and dad, and then earning a degree in BS Hotel, Restaurant and Institution Management (majoring in Culinary Arts) at De La Salle-College of Saint Benilde. Campos also worked for a number of local restaurants like Grind Bistro and Poke/Poke Manila, and was mentored by well-known local food figures like Locavore's Chef Mikel Zaguirre.

Campos' culinary career got a major boost in 2017, as she landed the position of Stagiaire at no less than Mugaritz (a.k.a. the Chef Andoni Luis Aduriz-owned establishment that's been hailed as one of the World's 50 Best Restaurants), in San Sebastián. "Back in November 2016, I had sent an email blast to a few of the World's Best Restaurants [inquiring about vacancies to stage], and it was Mugaritz that replied first in January of 2017." Afterwards, she also had a short stint with known Spanish chef Martin Berasategui at his restaurant of the same name (also named one of the World's 50 Best).

As Campos came back to the Philippines, she worked the role of Executive Chef for local brand The Commissary, but was laid off as the pandemic hit. "Considering the workhorse that I am, I couldn't stand just being in bed all day feeling miserable for myself and my situation," Campos shares. "I'm a single mom, and my daughter looks up to me a lot. Staying at home and staring at the ceiling was definitely not an option." She initially thought of starting a taqueria given her love for tacos—but was "beat to it" by friends and didn't want to get in their way.

Instead, Campos decided to take after her love of Spanish eats and establish M 46 Kalea. "I [had] been thinking about [the brand] for quite some time, [and] basically conceptualized it [in] about two months," says Campos. "From packaging, branding, menu creation, so on and so forth." She launched the brand in August of 2020, naming it that way as M was the starting letter of the street she grew up in; 46 is its house number; and Kalea is the street where she lived when she was staying in San Sebastián.

"[M 46 Kalea is] currently a home business, but I'm definitely looking into expanding to something bigger when the time is right and when the situation betters," says Campos. Whatever their state, M 46 Kalea cooks up truly amazing Spanish eats—and to us, that's what really matters.

M 46 Kalea Spanish Food Paella Savvy Seasoned Tpc-000001 Food Delivery Cvd Services Directory New Normal Foodie Evergreen
Your Guide to Thriving in This Strange New World
Staying
In? What to watch, what to eat, and where to shop from home
OR
Heading
Out? What you need to know to stay safe when heading out