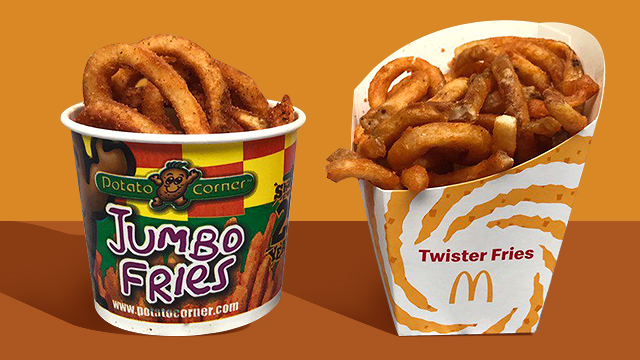 In the mood for curly fries?

(SPOT.ph) ICYMI, Potato Corner threw some serious shade earlier this week with a social media post seemingly taking after that of McDonald’s, who recently brought back their take on curly fries dubbed the Twister Fries. While McDonald’s version makes seasonal comebacks and is only available for a limited time, Potato Corner’s Loopys is available all year round—and they made sure to emphasize that they’ve “never left.” That led us to wonder, whose curly fries are actually better?

Also read: This Is Not a Drill: McDonald's Twister Fries Are Coming

The curly fries of McDonald's and Potato Corner go head-to-head in this spud-powered showdown:

What Are Curly Fries?

Now regular fries are great and all—but curly fries are on a whole ‘nother level. Aside from coming in a spiral shape that makes them all the more fun to eat, they also tend to be more flavorful than regular fries, with most versions having a distinctly more spiced profile. (Some would even argue that all curly fries taste the same... though that's another discussion for another day.)

Now, a disclaimer: This isn’t exactly the most fair of comparisons as Potato Corner’s Loopys are coated in their flavor powder. But for the love of spiral spuds, we decided to try them both anyway.

McDonald’s version (P74/Regular, P159/sharing; note that prices vary) is pretty straightforward. You get curly fries with a gleaming, golden-brown hue, and it arrives hot in its box with yellow stripes. If you’ve had curly fries before, you’ll know what these taste like—crispy on the outside and fluffy on the inside, with a deeply savory flavor peppered with spices for a welcome kick. It’s flavorful by itself but also takes well to ketchup, or (as the author prefers) dipped into the soft-serve plus chocolate syrup combo of McDonald’s McFloat or Hot Fudge Sundae.

If anything, the familiarity of it makes it a tad predictable. It’s exactly what we expect from curly fries, though there’s absolutely nothing wrong with that.

Availability-wise, these are, as mentioned, seasonal—you'll want to catch these while you can. But when they are available, like now, they're available at all branches and can easily be ordered for delivery.

As mentioned, this isn’t a 100% fair comparison as Loopys (P100) can only be had coated in Potato Corner’s signature flavor powders: Cheese, Sour Cream, BBQ, Sour Cheese, Wasabi, Sweetcorn or Chili BBQ. We went with BBQ, which seemed to be the closest flavor there is to the savory-spiced flavor of McDo’s.

The Loopys also arrive hot and look and feel a touch thicker in diameter than McDo’s, likely because of the powder it’s coated with. Because of the powder, it also feels less crisp; there’s a more damp feel to it, and it gets soggier easier (which may or may not be a bad thing). The fact that it stains your fingers also makes it slightly messier to eat.

Potato Corner’s BBQ flavor is one of their more popular powder options with a distinct profile that leans almost toward being more sweet than savory. The sweetness actually works to balance out the savoriness of the fries underneath, but the downside is that it also tends to drown out the spices—which is part and parcel of the appeal of curly fries in our book. With the strength in flavor of the powder, there's almost no advantage to going the Loopy version over Potato Corner's (already-delish) regular fries, aside from the shape.

Meanwhile, Potato Corner's version has the advantage of being on their menu all year round, but take note that it doesn't always seem to be available at all branches. We managed to get ours from the Tomas Morato branch of the Potato Corner + Nacho Mucho store on Grab, where it's listed on the menu, but it took us some combing through branches to find one that actually had it in stock.

Both versions of curly fries have their own set of pros and cons. McDonald’s is arguably safe, but it’s exactly what you’d expect curly fries to be: crispy, savory, spiced. Potato Corner gives you a more novel experience with their flavor-coated version, though in the case of the BBQ at least, this comes at the expense of crispness and of the spices coming through.

For this reason, we’re Team McDonald’s for this battle—though that’s not to say we wouldn’t order Potato Corner’s again, especially when (sniff) McDonald's seasonal version gets taken off the menu! Potato Corner also sells a ready-to-fry frozen version of the Loopys (P390/kilogram with 110 grams of flavor powder), which is worth stocking up on for when the hankering strikes.

Curly Fries French Fries McDonald's Potato Corner Food Delivery Adventurer Savvy Tpc-000001 Cvd Services Directory New Normal Foodie Staying In Heading Out
Your Guide to Thriving in This Strange New World
Staying
In? What to watch, what to eat, and where to shop from home
OR
Heading
Out? What you need to know to stay safe when heading out