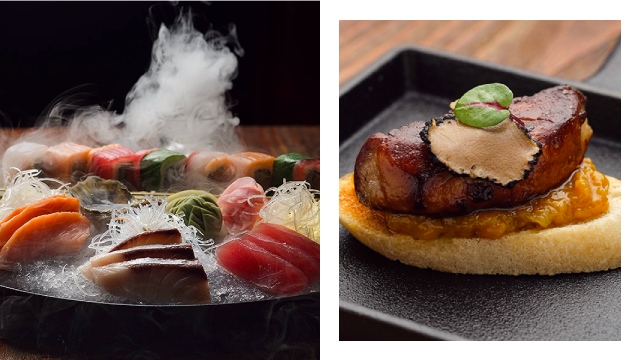 Plot twist: It's not fusion!

(SPOT.ph) When you think of great restaurants, you'd usually think of one singular cuisine or genre as their focus. Trying to dabble in different worlds can be tricky to pull off, as it often leads to compromise; there's a reason jacks-of-all-trades are often masters of none. Some try to bridge gaps by going the fusion route, but end up with arbitrary or plain-incompatible crossovers that instead render (con)-fusion (see what we did there?).

The recently opened Kobe Jones, however, manages to prove this notion wrong. Located in Salcedo Village, the stellar spot serves up Japanese and Western dishes side by side—each honoring their respective cuisines, and both executed really very well.

This suave restaurant in Makati brings together the best of the East and West:

Chef Tom Hines, of course, is no stranger to the local food scene. Originally from the U.K., Hines has been in the Philippines for 26 years, with an impressive resume under his belt that includes Wasabi, Lulu + Hooch, Smith Butcher and Grill Room, and more. At the recently opened Kobe Jones, the renowned chef draws on his culinary experiences here in the country, as he's worked with Filipino and Japanese chefs over the years.

The brooding establishment comes alive in the evening, and features a low-lit space that’s subtly ritzy without being over-the-top. Wingback chairs decked in leather, wooden tables, and hanging lamps make for a suave feel while glass panels gives you a peek of the greenery and the busy-yet-hushed character of Valero street.

Kobe Jones draws on Japanese and European cuisines, with dishes cooked up using great-quality ingredients—many of which are imported from Japan and Europe as well. It might be tempting to dismiss what they’re doing as fusion, but Hines clarifies that this is not the case at all. “We’re not a fusion restaurant by any means,” he explains. “We do Western food and Japanese food predominantly… but we stick to traditional recipes [with] a contemporary dash of flair.” With that, you’ll notice the dishes on their menu mostly being of either genre but keeping to their respective realm, with a focus on proper technique and A+ ingredients that shine through.

On the Western end of the spectrum is the Warm Blinis with Oscietra Caviar (P650), Kobe Jones’ take on the Russian classic, with roughly one-and-a-half inch savory pancakes topped with creme fraiche and the said variety of caviar hailed for its delicate, nutty flavor. Small as it may appear, this plate is impactful as can be; take a bite and you get a full-on sensation that combines warm, cold, tangy, creamy, juicy, and briny worlds. An even richer option is the Pan-Fried Foie Gras (P650), where a warm slab of foie—in its decidedly decadent glory—is given a vibrant uplift with their own Zambales mango chutney, made earthy and aromatic with Italian black truffle (for a "a little bit of luxury," says Hines), and served on a crisp sourdough croute that contributes its own slight tanginess to the sweet-savory mix.

Their Japanese side comes represented by way of classic and modern bites, as well as sushi and sashimi that highlight great-quality seafood. In the #2 Special (P550), the natural sweetness of Hokkaido scallops meets its umami match with an unagi glaze, while spinach underneath and ikura on top add pops of earthiness and brininess, respectively. The Maguro Nigiri with Uni (P350) highlights fresh, succulent tuna over sushi rice, with a sliver of sea urchin on top that makes the resulting bite just a touch richer without taking over.

Part and parcel of dining out is the experience of having your food served on your table—an element Hines emphasizes and plays on as some of their dishes go for a noteworthy presentation. Of these is The Jones Seafood Platter (P1,900), which comes with a glass cover that’s kept on until it’s served. As it’s uncovered, the platter lets out a whiff of smoke (care of dry ice!) that eventually reveals a lit-up spread of sashimi—specifically of king fish, tuna, salmon, oysters, and sea urchin—all wonderfully fresh, plus a rainbow roll with salmon, snapper, tuna, crab, and minty shiso leaves. “Our food is interactive,” Hines shares. “We’re just trying to bring back the theatre and the romance back into dining.”

Though Hines clarifies that it’s not fusion that they’re going for, one standout dish on the menu employs Western and Japanese elements—but with each one represented wholly and in such a way that they complement each other, rather than being jumbled-up. Meet the Pan-Fried Miso Salmon (P850), the star of which is Norwegian King salmon marinated with white miso and grilled with gentle heat under a salamander. The result is fish that’s just slightly charred outside but succulent as an be inside, easily yielding to the light prod of a fork; we’re not exaggerating when we say it melts in the mouth like butter, leaving behind the salmon’s richness amped up with umami from the miso.

The dish comes served with a creamy risotto of spinach, prosecco, and mint—making for rich but earthy spoonfuls that balance out the pull of the fish. And though the miso-tinged salmon and risotto might come from opposite sides of the globe, they complement each other beautifully, each part bringing out the best of the other to for cohesive union.

It's well worth leaving room for dessert here, too. The Lemon Cheesecake (P250) has got your back if it’s a bright bite you seek, what with its lightly-tangy character. And for an earthy-bittersweet ending, go for the Green Tea Chocolate Mousse (P250), which pairs lush layers of matcha and chocolate cream for swoon-worthy forkfuls that aren’t too sweet.

Be it European or Japanese, what’s evident across Kobe Jones’ menu is Hines’ approach of playing on the “three T’s”—temperature, taste, and texture. “They must complement each other and work into harmony,” he explains. Combine that philosophy with the use of topnotch ingredients and A+ execution, and you’ve got yourself a winning establishment that’s here to stay for the years to come.