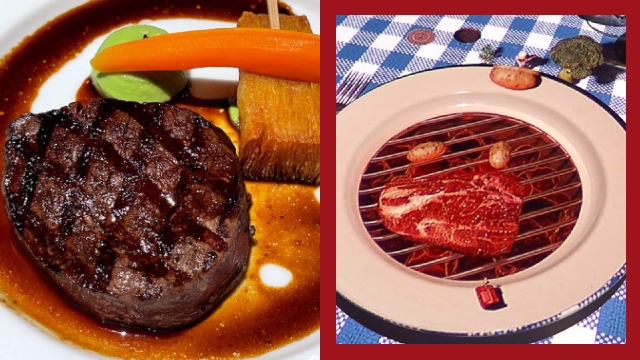 Here’s What It’s Like to Dine on Steak, Burrata + More By the "World’s Smallest Chef"

Le Petit Chef scurries around your plate to prep a stellar six-course dinner.

(SPOT.ph) The dining scene in Manila continues to grow and evolve—so much so that you've now got cool concepts that take the notion of eating out to involve not just the food itself, but also aspects that engage other senses. Just recently, Grand Hyatt Manila announced that they'd be bringing Belgium's Le Petit Chef to our shores, so we food-loving folk in Manila could see what it's like for ourselves to have the "world's smallest chef" prepare our meal.

Also read: This Novel Dining Concept Will Bring the "Smallest Chef in the World" to Your Plate

Le Petit Chef a.k.a. the world's "smallest chef" cooks up your meal right on your plate:

A quick rundown: Le Petit Chef refers to a special series of multi-course dinners, where a small animated chef is projected onto your plate via Belgian company Skullmapping's 3D projection mapping technology. Standing just six centimeters tall, Le Petit Chef is depicted jumping, tumbling around, and even risking life and limb as he "cooks" your food right in front of you! It's a real amusing sight, especially as these eye-popping visuals are matched with themed music and props—and at the end of each animation you are served a course from the six-part menu of your choice.

Behind the scenes, of course, the actual food is prepared by an actual chef who is in fact a real person—and that person is no other than Grand Hyatt's own Chef Mark Hagan. The Le Petit Chef animations are standardized, but the chefs are open to interpret them as they please. "I just took one video at a time and then I really studied what I see going on on the table, [like] what the little chef is saying. Then I went back with my culinary team, we sat down [and] watched them together [and] sprung some ideas on each other and we really just came up with the menu with the [team of] chefs at The Peak," Hagan shares in an exchange with SPOT.ph. Though the dishes on this particular Le Petit Chef series (there are more coming soon!) are classic French fare at their core, Hagan and his team incorporate subtle modern touches as well, going for a more streamlined presentation or incorporating lighter, sprightlier elements to balance heavier bits out.

The Classic Menu (P5,800) opens with the Italian Burrata, which begins with Le Petit Chef digging through grass and soil—and getting caught in an explosion thanks to a mischievous gopher. (Fret not, he makes it alive.) The dish arrives on the table with a creamy ball of the classic cheese, surrounded by tart-sweet accompaniments that even out its lush character—think tangy pickled radish, peppery arugula, juicy wedges of grapefruit, earthy dots of eggplant puree, and 15-year aged balsamic vinegar plus extra-virgin olive oil to underscore the mix.

From there, the tiny chef sails the seas and even battles it out with a squirming octopus tentacle—this particular segment is a real riot to watch, folks. But his efforts and sacrifice pay off in the resulting dish that is the Bouillabaisse. Grand Hyatt's interpretation of the classic Provençal stew wonderfully captures the heartiness the dish is known for, with a potent saffron shellfish broth matched with premium seafood like seabass, U.S. scallops, and tiger prawns all cooked to perfection—as well as the quintessential crouton and rouille, of course.

Soon you hear birds chirping and country music playing—and Le Petit Chef crawls out of a small tent (initially, erm, unclothed—before catching himself and dressing in the proper chef garments!) in an outdoor setting. Pulling a whole chicken even bigger than his six-centimeter frame, he lights a campfire for cooking—and what you get is the Smoked Chicken Foie Gras Ballotine. Grand Hyatt's take on the classic boned, rolled, and tied meat dish comes as a pâté-esque wedge that's brought to decadent heights with foie gras, and served atop a crostini. True to its name, the ballotine itself is properly smoky—but your best bet is to dab on a small spoonful from the mushroom duxelles and dollop on the fig jam served alongside for an earthy, savory-sweet contrast.

Your plate soon turns into a 3D-projected grill, with Le Petit Chef drizzling gas around and lighting a fire which almost blows him out. (Gotta admire the little guy's dedication.) On it is what looks to be a raw steak—which means only one thing: it's time for the Char-Grilled Australian Beef Tenderloin! You're asked how you'd like your meat (the chef recommends it medium, but we say go medium-rare) and it arrives perfectly seared such that it's slightly crusty on the outside and cooked to your preferred doneness on the inside.

Its accompaniments—partners in crime, if you will—are not to be missed, either. There's the small yet impactful cube of potato galette, which showcases an impressive appearance with multiple thin layers and a crisp-tender character; meanwhile, broccoli puree contributes earthiness for balance. Adding color as well as a buttery sweetness to the mix is a roasted carrot; finally, a brandy pepper sauce ties everything together with its distinctive depth of flavor.

Moving on, the tiny chef pops back up on your table, which at this point shows what seems to be a copper pot in the center of your plate, surrounded by a milk bottle and other ingredients. The chef uses all his might to pour in the milk, followed by other ingredients. The result is the Mascarpone Creme Brulee—and don't you underestimate its size. Break into the crackly torched-sugar top and you're met with a lush layer of mascarpone cream, under which is a dreamy layer of rice pudding illuminated by a tart berry compote.

The table soon shows a snowy scene and the pocket-sized chef comes out of an igloo. He rolls balls out of the snow and throws berries into the mix—and though he unfortunately falls into an ice hole, what you get is the show-stopping Homemade Baked Alaska. Grand Hyatt's interpretation of the classic dessert has an A+ balance of flavors—they employ Italian meringue that's billowy and not too sticky or sweet, and chocolate-vanilla ice cream that's velvety on the tongue. Add to that the tanginess of the raspberries, and you've got a real memorable treat that concludes the Le Petit Chef voyage real perfectly.

Really looking to treat yourself? The Premium Menu (P6,300) switches up the Australian beef tenderloin for Australian Wagyu beef tenderloin in the steak course, while the First Class Menu (P6,800) also swaps the tiger prawns for lobster tails in the bouillabaisse course.

Try Le Petit Chef for Yourself

We know you're excited—or at the very least intrigued—and here's what you need to know. The concept will be heading over to the Veranda Room of Grand Hyatt's The Peak starting March 1, as a recurring series of "shows" that can accommodate 16 people max per session. This happens at dinner time, from Tuesdays to Saturdays with two shows per night—the first being from 6 to 8 p.m. and the second being from 8:30 to 10:30 p.m. Note that you'll have to be at the venue at least 30 minutes before the show.

Seats are running out fast—as of writing the closest date with available seats is March 31!—so you'll want to book your reservations stat via Le Petit Chef's Grand Hyatt Manila website. Alternatively, you can give them a call at 8838-1234 or send  them an email through manila.grand@hyatt.com.